Canada’s daily newspaper landscape is poised for a shakeup after Postmedia announced it was buying 175 English-language newspapers from Quebecor’s Sun Media division in a deal worth $316 million.

Canada’s daily newspaper landscape is poised for a shakeup after Postmedia (TSX:PCN.A) announced it was buying 175 English-language newspapers from Quebecor’s (TSX: QBR.B) Sun Media division in a deal worth $316 million.

The acquisition, announced October 6, puts the ownership of all the major daily papers in many Canadian markets under the umbrella of a single company.

“We intend to continue to operate the Sun Media major market dailies and their digital properties side by side with our existing properties in markets with multiple brands as we have in Vancouver with the Province and the Vancouver Sun for more than 30 years,” Postmedia CEO Paul Godfrey, who previously worked at Sun Media for 16 years, said in a statement.

The deal includes the sale of Sun Media’s free 24 Hours dailies, which run in both Vancouver and Toronto.

This leaves the Vancouver edition of the Metro newspaper as the only English-language daily in the city not owned by Postmedia.

The Toronto Sun, the Ottawa Sun, The Winnipeg Sun, The Calgary Sun and the Edmonton Sun are included in the deal that would see Postmedia take on about $140 million in new debt. The remaining $186 million is expected to be raised through rights offerings to current shareholders. 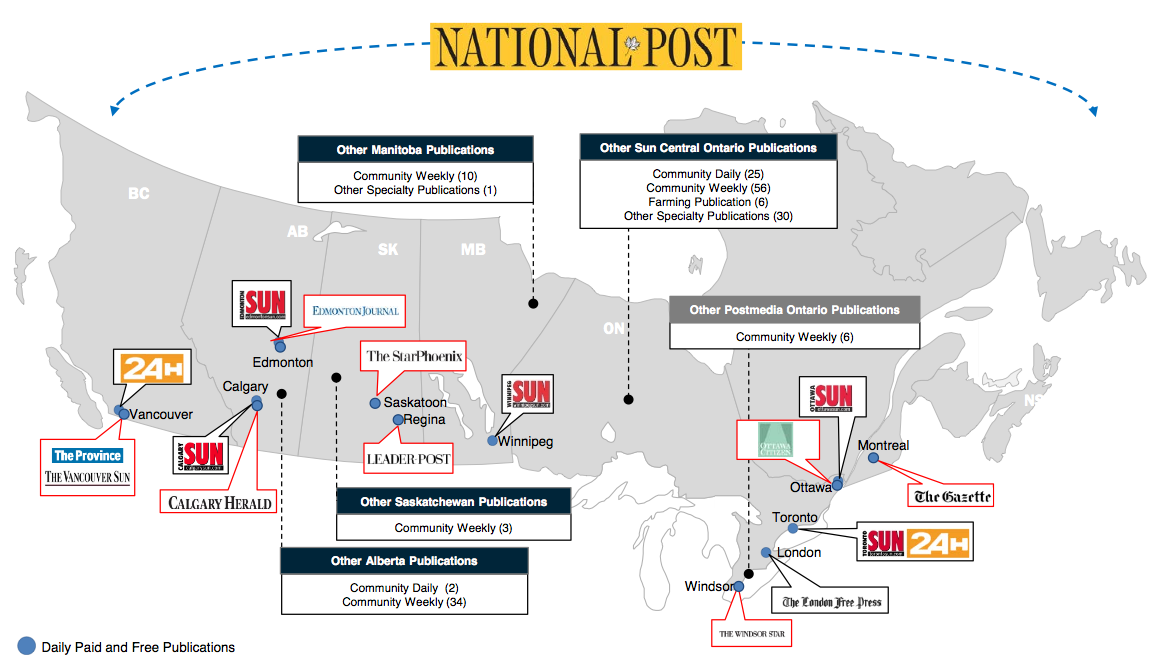 More than 1 million square feet of Sun Media real estate worth $50-60 million is also part of the transaction, which is still subject to regulatory approval.

“Newspaper revenues have been declining year by year," Quebecor CEO Pierre Dion said in a statement.

"This transaction therefore comes at a time when the Canadian newspaper business absolutely needs consolidation to remain viable and to compete with digital media.”

Although Quebecor’s Sun News TV network is not part of the deal, Postmedia would acquire Sun Media’s online Canoe network.

The Canoe network, which includes the Sun Media newspaper sites, had about 8.515 million unique visitors in the third quarter of 2014, according to information provided to Postmedia investors October 6.

That made it the second most-viewed news and information network in Canada behind CBC’s websites, which drew about 8.556 million unique visitors.

Combined, the two media organizations could make for the most viewed online news and information network in the country if those numbers hold steady.