Almost halfway through the BC Liberals’ fourth term, support for the government’s handling of liquefied natural gas (LNG), the energy sector and business taxes is on the wane, according to an exclusive survey from Insights West conducted on behalf of Business in Vancouver.

The B.C. government report card, conducted December 4 to 6, comes in the wake of Petronas’ December 3 announcement that it was deferring a final investment decision on its $36 billion LNG project in B.C.

Just 28% of British Columbians said the government has done a good job of handling LNG, energy and pipelines compared with the 36% that gave Victoria the thumbs up six months ago.

Meanwhile, most respondents said the government has done a poor job when it comes to dealing with the Kinder Morgan Trans Mountain Pipeline (57%) and the Enbridge (TSX:ENB) Northern Gateway Pipeline (55%).

Insights West vice-president Mario Canseco said the energy sector used to be one of the highest-rated categories for the Liberals but approval ratings for that sector have declined 11 percentage points, from 39%, in the past year.

“There’s a drop in the economy and jobs as well, so it’s almost as if the honeymoon period – for lack of a better word – is starting to be over,” he said.

The government’s approval numbers on the economy and jobs fell five percentage points to 35% compared with the last poll conducted six months ago. Only one-quarter of respondents said the government was doing a good job at handling business taxes and reducing red tape. 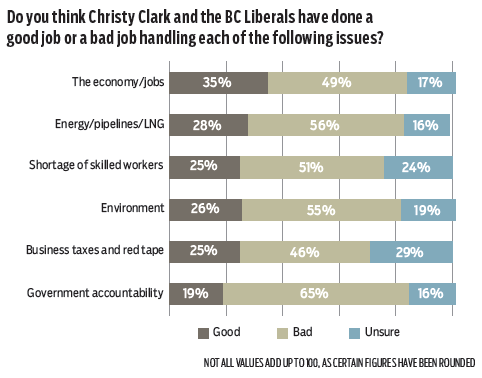 But the July arrival of new CEO Jessica McDonald has helped stabilize approval ratings for BC Hydro, as 27% of survey respondents said the government was doing a good job managing BC Hydro, up from 17% six months ago.

Furthermore, reforms to outdated rules on alcohol have worked in favour of the Liberals.

In June, the government introduced minimum prices for drinks and began allowing bars to serve happy-hour specials and change drink prices throughout the day. 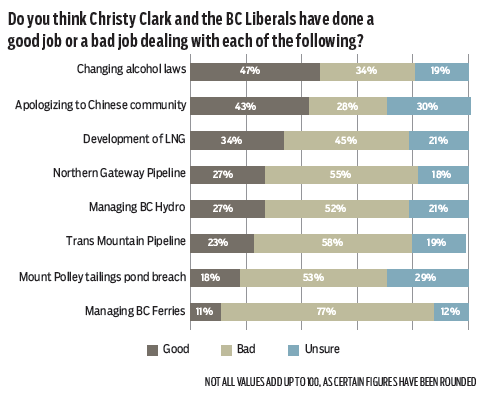 Almost half the respondents (47%) said the province has done a good job carrying out the changes.

“It’s definitely the best decision they’ve made over the past six months,” Canseco said.

However, public opinion on the government’s handling of ferries has crumbled.

In November, BC Ferries released a report that considered cutting service between Nanaimo and Horseshoe Bay to save money.

B.C. Transportation Minister Todd Stone announced the next day that service would not be cut, but BC Ferries CEO Mike Corrigan followed up saying the company might have to raise fees.

Although B.C. Premier Christy Clark’s approval ratings have not reached the depths of Campbell’s, her popularity has slid to 34% from 41% over the past six months.

“This is the first time since the election she’s dropped below 40%,” he said.

“You have some BC Liberal voters who are starting to wonder, ‘Is this a premier who’s really for industry?’”

He added that BC NDP leader John Horgan also has “a lot of work” to do when it comes to his approval ratings.

Horgan, who was acclaimed leader in May, has increased his rating from 31% and is now tied with Clark at 34%. 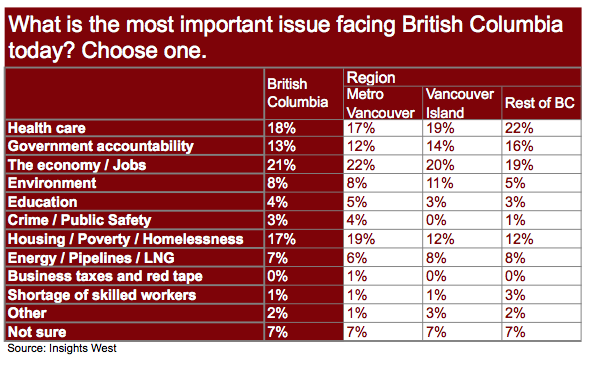 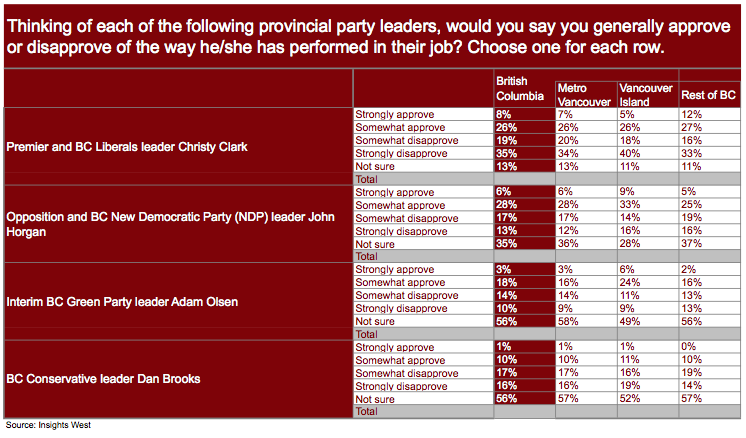 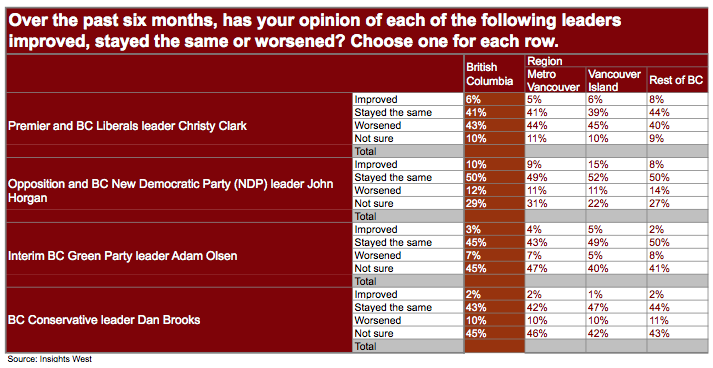