B.C. was one of only two provinces that did not increase its profit from alcohol sales in the 2014 fiscal year

British Columbia had the biggest drop in profit from alcohol sales among Canadian provinces in the fiscal year ended March 31, 2014, according to data that Statistics Canada released May 4.

The province generated almost $877 million in profit from alcohol sales in the 2014 fiscal year compared with $929.6 million a year earlier, according to the nation’s number cruncher.

That 5.7% drop was worst among provinces although Nunavut was the region with the worst drop, with a 15.5% decline. The only other province to see a year-over-year drop in profit from alcohol sales was New Brunswick, with a 1.8% drop. 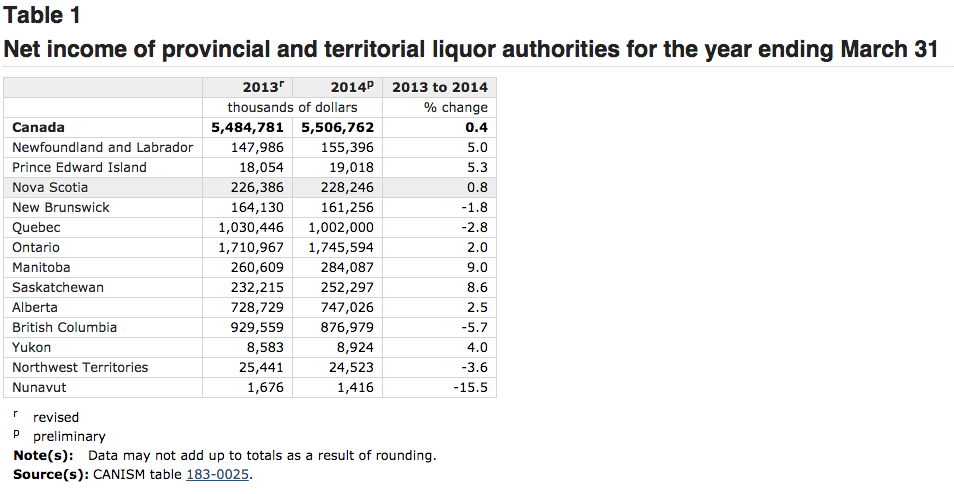 Overall, liquor retailers in Canada sold $20.5 billion worth of alcoholic beverages in the 2014 fiscal year, up 1.1% from the previous year.

Beer remained the alcoholic drink of choice for Canadians with $8.7 billion in sales.

Ciders, coolers and other so-called “refreshment” beverages saw the biggest sales surge: 9.5%. That outpaced the 2.3% sales growth for wine as well as the 0.5% growth for spirits and the near 0% growth for beer.

“Net income and other government revenue derived from the control and sale of alcoholic beverages, including excise taxes, retail sales taxes, specific taxes on alcohol as well as licence and permit revenues, were $10.5 billion in 2013/2014,” Statistics Canada noted.

Within the spirit category, gin sales increased the most (2.9%), followed by whisky sales (2.3%). The area within spirits that had the biggest drop in sales was liqueurs, which fell 2%.