Approximately 20% of Vancouver detached-housing sales can be defined as flips – the buying and selling of a property in less than 12 months – and Dunbar is the city’s hottest flipping market.

Dunbar, an established west-side Vancouver neighbourhood where the typical price of a house is now $2.27 million, accounted for 30 of the 328 detached-house flips in the city during 2014 and the first five months of this year, based on exclusive research done for Business in Vancouver by New Westminster’s Landcor Data Corp.

Dunbar average house prices rose 9.1% in the past year, which would equate to a theoretical return of approximately $200,000 for someone who had bought and sold a typical house in that period.

But the Landcor data suggests some savvy investors did much better than that.

For the Dunbar area the typical house flip generated a 23% annual return, or an average of $1,360 per day that the house was held.

“A well-backed investor leveraging 20% down financing [around $400,000] would yield over 100% [on their cash investment],” said Derek Tinney, Landcor Data operations manager.

Vancouver realtor Ken Leong, who admits to a brief – and heady – history of flipping condominiums for himself and clients, said it takes more nerve and cash to speculate on Vancouver’s detached-house market than during the exuberant days of condo flips a decade ago. 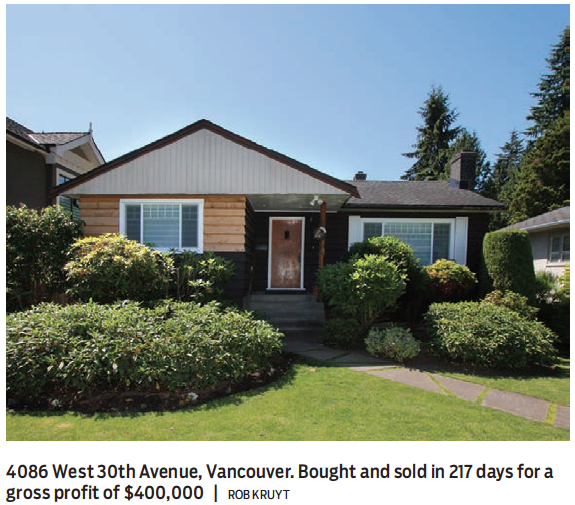 Leong said that if house price increases go soft – as in the current condo market – investors could find themselves financially under water fast.

That was the experience of at least one East Vancouver speculator, who lost $61,000 in 57 days last fall flipping a $905,000 detached house on East 29th Avenue.

Leong is not surprised there’s not more flipping going on, despite the 10% increase in average Vancouver house prices over the past year. He suspects some of what might be seen as speculation is people forced to sell quickly for other reasons, such as changing family or employment situations. 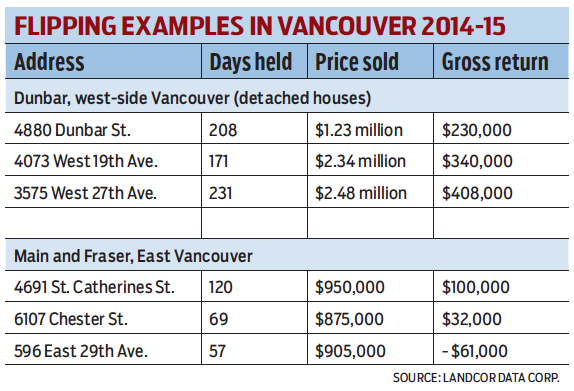 Speculation, he said, is not a guarantee of hefty profits. 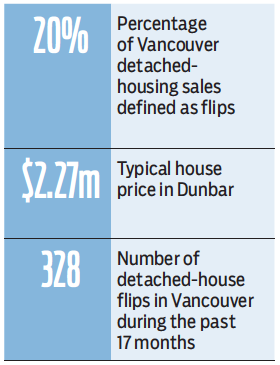 As Leong explained, if an investor bought a house for $1 million and flipped it a few months later for $1.1 million, he or she would have to pay $18,000 in B.C.’s property purchase tax. Realtor commissions to sell the house would total around $33,500. The capital gains tax, likely at the highest tax bracket, would be roughly $30,000.

“It would be hard to make a big profit on such a flip,” Leong said. “Actually the government would make more than the investor.” •