Upgrading to a family-appropriate home is impossible for many, according to Vancity

It’s hard enough to become a homeowner in Metro Vancouver, with the average home price being almost double that of the national average. But for those young families who do manage to buy a starter home, moving to a space that can accommodate kids can be downright impossible, according to a Vancity study released September 17.

This means many families become trapped in spaces that are too small.

“And the relatively more affordable options like three-bedroom townhomes and row houses are limited and rarely available for purchase, further compounding the problem."

The study found that 91% of apartments had a maximum of two bedrooms. The most suitable choice for families, according to the study, is a three-bedroom attached property like a townhouse or row house, but these properties comprise only 9% of all homes across Metro Vancouver. These units have a turnover rate of 9.5%, which means only 0.86% of all homes across the region are both adequate for young families and actually available for purchase.

This doesn’t even take affordability into account; when the study looked at what these homes cost and compared this with the average income of young families in Metro Vancouver, the problem became even more pronounced.

In 2014, the median household income for young families – defined as those with both parents between 25 and 36 years old – in which two parents worked was $65,492. Couples earning this amount can afford housing that costs around $384,000. However, the benchmark price of attached properties in the region was $511,500; to buy a home at this price would require a household income of at least $86,364 – 32% higher than the average young family income. 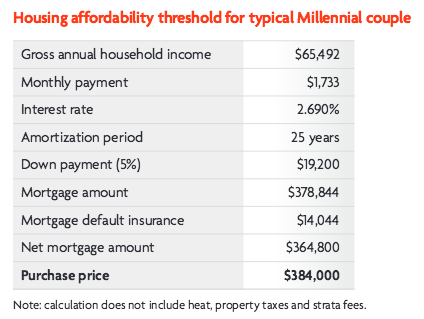 Across the region, families who wish to move from a one-bedroom apartment or condo to a three-bedroom home with an attached yard would have to increase their debt level by an average of 95%. In Vancouver’s west side, this jumps to 158%. In the city’s east side, it is a much lower 78%. The biggest jump is found in White Rock, where debt levels would increase by an average of 164%.

Vancity said governments and developers would ideally play a role in fixing this trap for families.

“Governments should focus on encouraging supply through incentives for developers, inclusionary zoning and partnerships to support shared-equity co-ops,” the report said.

For now, however, families have little choice beyond looking into different locations and living styles.