By Glen Korstrom | January 14, 2016, 11:00am
Best Buy announced last summer that it would close all of its Future Shop stores but signage for that brand still hangs on Granville Street | Glen Korstrom

The parent of Burnaby-based Best Buy Canada revealed January 14 that it had weak holiday sales, primarily when it came to smartphones.

The result was that the company’s stock (NYSE:BBY) plunged more than 11% and was still trading in that range at 11 a.m. Pacific Time.

The electronics chain said that its U.S. sales during the nine weeks until Jan. 2 fell 1.2%, excluding newly opened or closed stores.

Best Buy’s overall revenue slid 3.6% to $10.96 billion during the holidays, partly as a result of the company closing 131 Future Shop stores in Canada in the year. The company then reopened 65 of those stores as Best Buy locations even though some of those stores, such as on Granville Street, still have the old Future Shop signage.

Best Buy CEO Hubert Joly told media that he has no plans to close more stores.

The company's director of communications, Jeff Shelman, told Business in Vancouver in an email that the company's international sales for the nine-week holiday period was $911 million. That's down 26.1% compared with last year.

The vast majority of the company's international sales has historically come from Canada but Shelman said the company does not break out numbers solely for Canada. Best Buy also generates some revenue from Mexico.

Best Buy's international revenue was $4.284 billion in its last full fiscal year, which ended in March 2015, and the division has been struggling.

Last summer, BIV reported that the company’s quarterly sales were soaring in the U.S., but plunged 25.6% internationally .

Analysts told BIV in the lead-up to the holiday season that Best Buy Co.’s decision to extinguish its Future Shop brand in Canada made the Black Friday shopping season significant because it gave other electronics retailers an opportunity to become known as the go-to place for deep discounts.

“Future Shop made it a strategic goal to own Black Friday,” retail analyst and DIG360 owner David Gray told BIV. 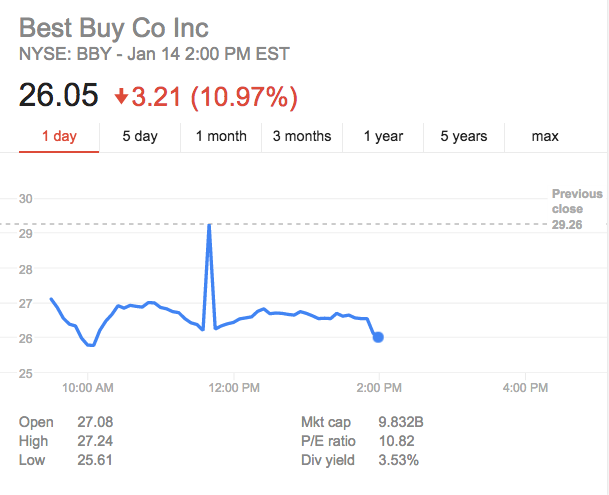 “Now, with the Future Shop brand gone, it will be interesting to see where that consumer spending goes, whether people will associate those discounts with Best Buy.”

Neil Saunders, who is CEO of the retail analysis firm Conlumino, said that Best Buy’s dismal smartphone sales reflected that personal electronics were not at the top of everyone’s Christmas lists this year.

“In particular, the purchasing of mobile devices, including tablets, was lackluster thanks to a relatively weak product line up which failed to inspire consumers and encourage them to spend,” he said.

“Given that the mobile category has been a key holiday line in the past, its failure to provide a boost to sales this year made meeting comparable numbers a tall order.”