His jurisdiction is the world’s third-biggest producer, but, without the estimated $2 billion a year of diamond production, times would be tougher amid the global oil and gas slump.

“Industry has been hit very hard,” McLeod told Business in Vancouver while visiting Vancouver for January’s annual Mineral Exploration Roundup convention. “Our government is not immune ... and our revenues are down.”

Yellowknife South MLA McLeod became premier in 2011 and was the first to be re-elected under the territory’s consensus system last December.

McLeod said the declining fossil fuel prices mean that his government will have to make some hard decisions later this year.

“I expect we’ll have to do some belt-tightening.”

McLeod said project after project has been shelved or cancelled while crude oil prices languish around US$30 a barrel. Oil was trading above US$90 a barrel in September 2014. He said Imperial Oil (TSX:IMO) continues, as it has since 1936, to extract oil at Norman Wells. But the big megaproject that all were hoping would have happened by now is being kicked down the road yet again. The $20 billion 1,220-kilometre Mackenzie Valley pipeline approved in 2010 would have transported natural gas to northern Alberta.

“The proponent [Imperial Oil] was supposed to make a go/no-go decision in December 2015. They’ve since filed for an extension of the certificate of public conveyance and necessity,” McLeod said. “They asked for it to be extended for seven years.”

McLeod is so bearish that he doesn’t expect oil and gas revenue to rebound until sometime next decade.

“We don’t see oil and gas coming back for at least 10 years, and that’s being optimistic. If at some future point we can’t go south or east or west, we’d be looking at possibilities; can we have an energy corridor down the valley?”

While trying to maintain N.W.T.’s mining industry, McLeod said other options to foster economic development are being explored, including investments in strategic infrastructure projects.

He is encouraged by Prime Minister Justin Trudeau’s commitment to double infrastructure spending across the country and is hoping some of that money comes north. All-weather roads to diamond-rich districts and the Mackenzie Valley Highway are on the N.W.T. wish list. 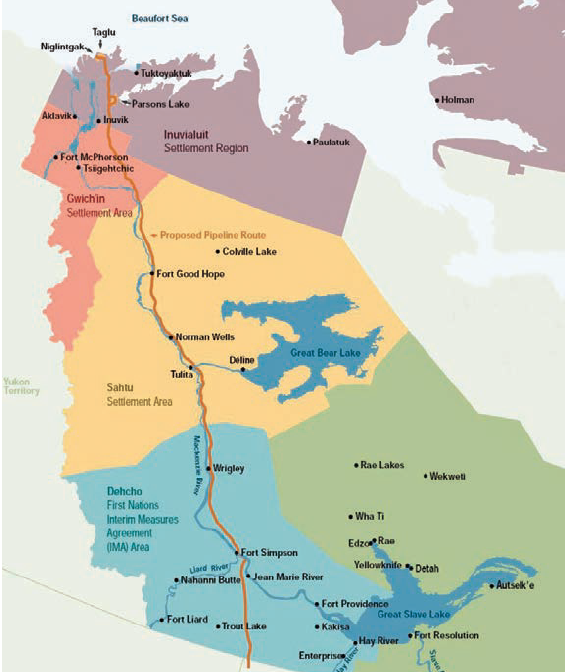 (Image: The $20 billion Mackenzie Valley pipeline was approved in 2010, but a final decision on the project has been delayed again | Indian and Northern Affairs Canada)

In its Territorial Outlook last July, the Conference Board of Canada said N.W.T. had a weaker medium-to-long-term economic outlook than the Yukon and Nunavut. While the mining industry is more mature and production declines, the board said N.W.T.’s economic growth “will be less than stellar over the next two years.”

It added that the financing for the new Gahcho Kué diamond mine could cushion the blow.

McLeod is happy with diversification plans, such as aurora borealis tourism products targeting Japanese visitors and a partnership with the Japanese space agency. N.W.T. is ideal for launching and monitoring satellites.

Federally, N.W.T. continues to ply the road of devolution, a process to make N.W.T. self-governing that started under the Conservatives and gave the territory province-like powers over land and resources on April 1, 2014.

“We have some unfinished business on devolution,” McLeod said. “We have everything else but the environmental assessment process.” •