The cost of the artificial turf installed in BC Place Stadium for last year’s FIFA Women’s World Cup and this weekend’s HSBC World Rugby Canada Sevens tournament was almost double what two of the competing bidders offered.

BC Pavilion Corp. (PavCo) announced last March that it chose Burnaby’s Centaur Products to install a new Polytan LigaTurf surface for $1.327 million. Centaur and Polytan supplied the previous surface that was installed in September 2011 for $1.2 million. BC Place could have had a surface even cheaper than Edmonton’s Commonwealth Stadium, which hired Shaw Sports for a $800,000 job before the FIFA tournament.

PavCo and the ministry responsible, Transportation and Infrastructure, had refused to routinely release the dollar values of the other bidders. They claimed that Centaur/Polytan was the only one that met both FIFA and World Rugby specifications while being compatible with the stadium’s existing elastic shock-absorbing layer, yet two of the other bidders had satisfied international soccer and rugby standards at other venues.

Documents released under Freedom of Information (FOI) show that FieldTurf proposed two soccer and rugby-friendly products: Revolution for $659,945 and XM6-65 for $622,022. AstroTurf West Distributors proposed its GT+1 surface for $698,000.

Centaur and a fourth bidder, UBU Sports, each pitched two products, but PavCo censored the prices from the documents released.

PavCo published the $1.327 million figure in a March 2015 news release, but cited third-party trade secrets and fear of harm to PavCo for withholding the Centaur prices in the FOI documents. 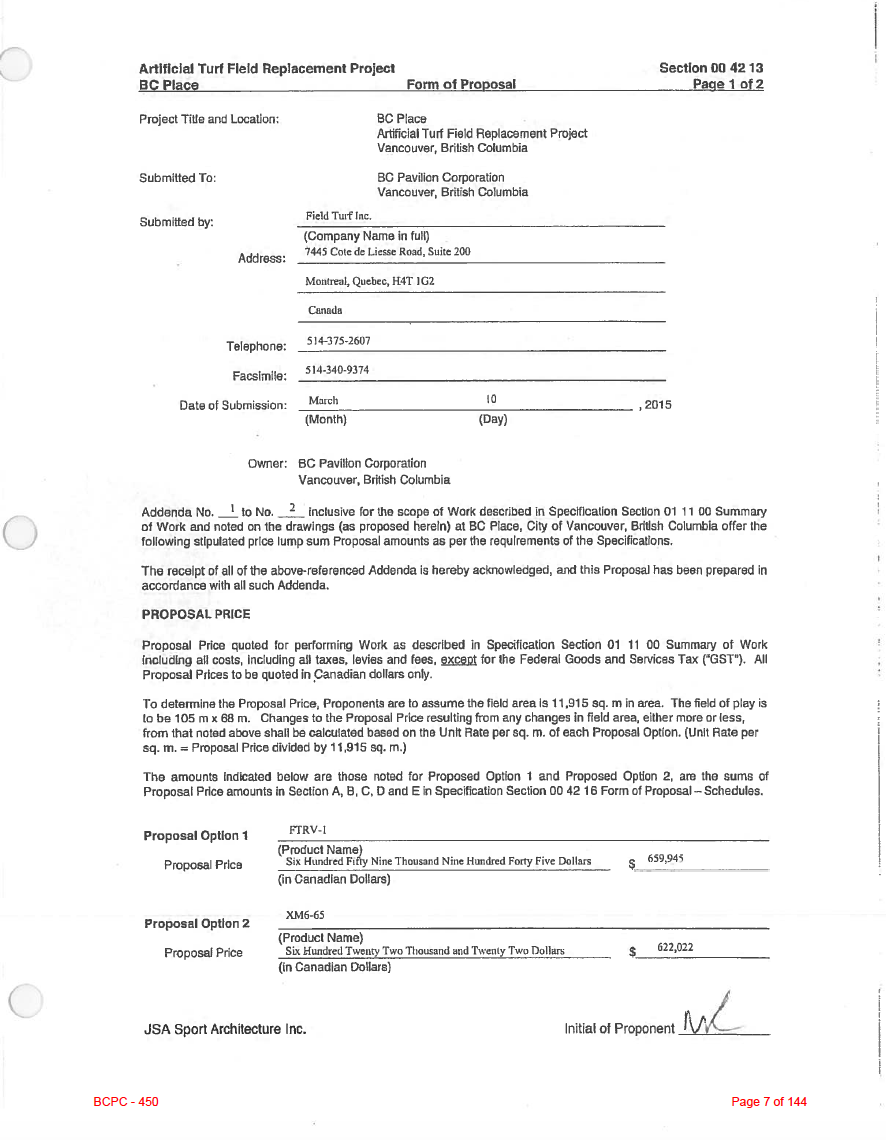 Bid committee documents released last summer through a separate FOI request showed Centaur had the worst price score, while FieldTurf had the best. Price, however, was worth 12.5% of the overall evaluation by a committee that included stadium operations director Brian Griffin, PavCo finance director Kim Campbell and sports architecture consultant Robert Johnston, who had written the tendering documents.

The bid evaluation documents declared all four compatible with BC Place’s elastic layer shock absorbing pad. The Canadian Soccer Association (which contributed $400,000), the Vancouver Whitecaps and BC Lions all preferred Polytan over FieldTurf.

The documents indicated that Rugby Canada had no input, despite contributing $100,000.

Crews struggled to install the Polytan carpet in time for the Women’s World Cup last June and resorted to steamrolling the plastic field and watering it during the summer drought so that balls would properly bounce.

Neither PavCo nor FIFA published the Sports Labs report that was cited for the pre-tournament certification.