By Nelson Bennett | April 15, 2016, 4:46pm
First Nations built this house on Lelu Island as part of a protest camp set up to protect the Pacific NorthWest LNG project. | Photo by Tamo Campos

A report from the BC Environmental Assessment Office (EAO) to cabinet ministers on the Pacific Northwest LNG project inadvertently missed a 270-page report from the Kitsumkalum First Nation on its asserted claims to the Prince Rupert area, according to ministerial briefings released under a freedom of information request.

What is most interesting about the FOI documents released to Business in Vancouver is that the government censored parts of a ministerial briefing, despite the fact the full text is available online through a simple Google search.

That means the government’s freedom of information officials are either frivolously redacting information in response to FOI requests, or it’s not doing a very good job of keeping confidential information confidential.

Here is the redacted version of the ministerial briefing. 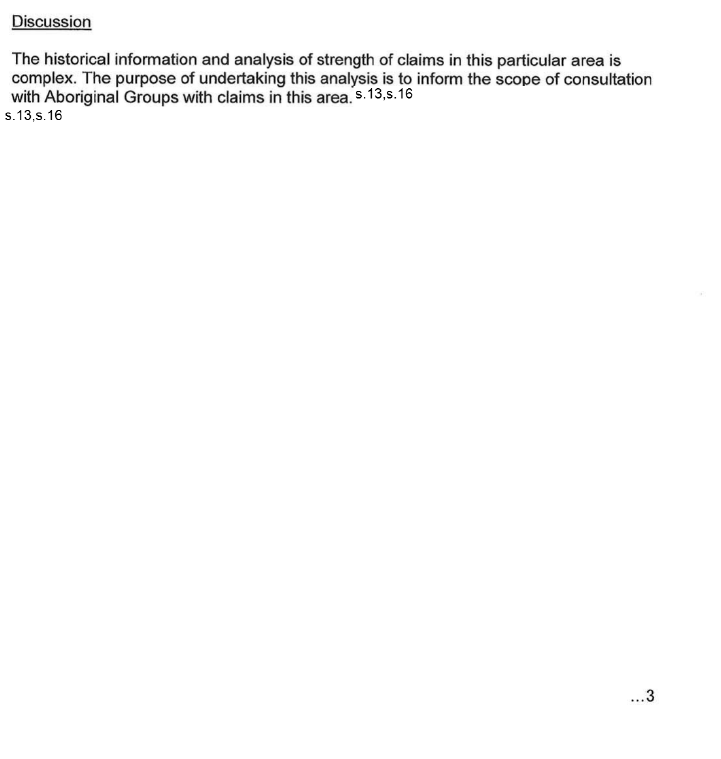 And here is the unredacted version found online through a simple Google search. 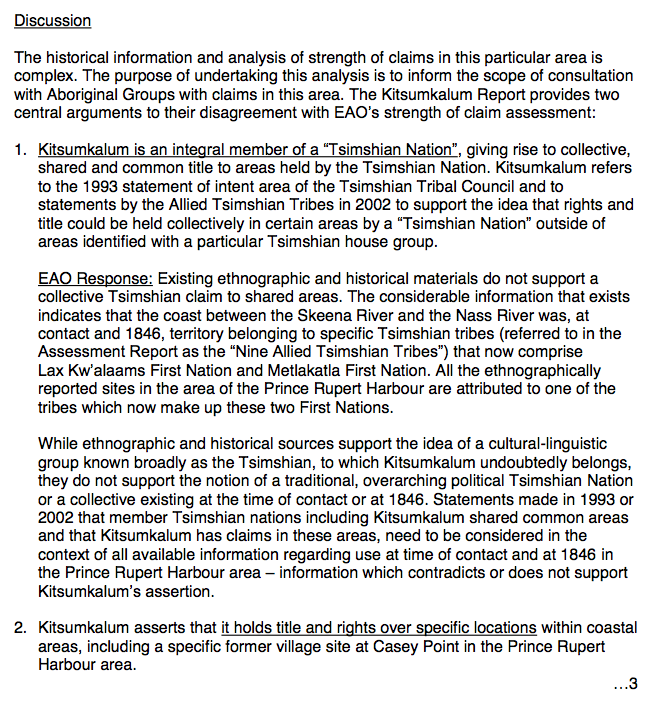 In January, Business in Vancouver filed a freedom of information request asking for ministerial briefing notes related to the Petronas PNW LNG project and any concerns First Nations may have raised over the proposed LNG site on Lelu Island.

Lelu Island is currently being occupied by First Nations opposed to the project.

Among other things, the documents that were released confirm that the B.C. government has had meetings with the new mayor and council from the Lax Kw’ alaams First Nation, which recently came under fire from some hereditary chiefs for what they view as a reversal of its official stance against the project.

They also confirm that the B.C. EAO received a report from the Kitsumkalum that was intended to establish that it has some historical claim to that area and, therefore, should have a greater say as part of an environmental assessment.

But the EAO somehow missed the report, so the information from it was not included when the EAO made its referral on the PNW LNG project to cabinet ministers on November 5, 2014.

The EAO referred the project for approval on November 5, 2014. But that referral missed a 270-page report, which had been sent by email to the EAO on October 24, 2015 by the Kitsumkalum.

“EAO inadvertently missed seeing this email until November 5, 2014, after the Assessment Report had been referred to ministers earlier that day, and therefore did not consider the Kitsumkalum report in the PNW LNG assessment report,” a brief to Environment Minister Mary Polak and Natural Gas Minister Rich Coleman states.

A November 19, 2014 brief to Polak and Coleman essentially downplays the report’s importance.

“The result of the review of the Kitsumkalum report is that it does not provide information that changes the EAO’s conclusion already captured in the PNW LNG," the brief states.

It includes a backgrounder about the Kitsumkalum’s claim to the area. Several paragraphs are redacted. But a simple Google search turned up the full, uncensored brief.

The uncensored version dismisses the Kitsumkalum’s claim to having aboriginal rights and title claims to Prince Rupert Harbour as being “weak to moderate.”

The Kitsumkalum are part of the Tsimshian Nation. But the B.C. government concludes that, of the various tribal groups within the Tsimshian Nation, only two – the Lax Kw’alaams and the Metlakatla – have strong claims to the Prince Rupert Harbour area.

“Existing ethnographic and historical materials do not support a collective Tsimshian claim to shared areas,” the redacted portion of the EAO’s opinion states.

“The considerable information that exists indicates that the coast between the Skeena River and the Nass River was, at contact and 1846, territory belonging to specific Tsimshian tribes…that now comprise the Lax Kw’alaams First Nation and Metlakatla.”

But the Lax Kw’alaams' position may have changed, thanks to a change in the elected council.

Ministerial briefing notes released to BIV confirm that government officials met with Helin and councilors in December. Details about what might have been discussed have been censored.

But it appears that the new council is more receptive to the PNW LNG project than the one that was voted out.

In a letter sent to the Canadian Environmental Assessment Agency (CEAA) in mid-March, Helin wrote that, should the CEAA approve the project, the Lax Kw’alaams would support it, with conditions.