2016 Newsmaker of the Year: The Foreign Buyer

The foreign buyer in B.C. was largely an unknown entity for most of 2016.

Not many people were clear on where he was from, where he was headed, what he was after or what his end game was.

One thing was clear, however: he had a lot of money and was not afraid to spend it.

Much of the above was blamed on that shadowy foreign buyer, whether it was warranted or not.

Enter the politicians and the 15% tax on foreign buyers of Metro Vancouver residential real estate.

The provincial government initiative, which came into effect August 2, has had a deeper and faster negative impact on property sales and prices than the B.C. finance minister forecast this spring.

In June, when the B.C. government was opposed to a tax on foreign homebuyers, it released a forecast of what could happen if only 3% of foreigners stopped buying. The pessimistic outlook turned out to be even worse than imagined once the tax was introduced.

In a 10-page report, the finance ministry estimated that, within a year of the tax being implemented, $1 billion would vanish with a loss of 1,400 home sales in Metro Vancouver.

“If home prices fell by 10% due to policy measures, then roughly $60 billion in home equity would be lost, averaging about $85,000 per homeowner,” the analysis said. 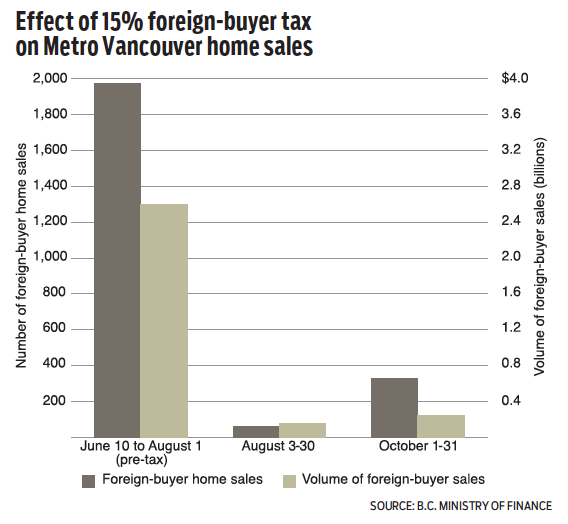 Yet by October 31 – three months after the tax came in – Metro Vancouver housing sales through the Real Estate Board of Greater Vancouver had plunged by 2,200 units compared with pre-tax July, a loss of more than $2 billion in total volume, or twice as high as the government had forecast. As of November, the typical home value in Metro Vancouver was down $181,700 compared with a year earlier. The benchmark price of a detached house – the favoured target of the foreign buyer – had dropped 23%, or $347,500, to $1.15 million. High-end markets are the most affected.

“We have a completely collapsed activity level,” real estate agent Brent Eilers of Re/Max Masters Realty in West Vancouver told Business in Vancouver in November. “What the market’s done since August 1 is dramatic.”

West Vancouver sales of detached houses between August 1 and October 31 were down 72% over the same time period in 2015, from 266 to 75 – the biggest sales drop in the Lower Mainland.

As of November, detached-house sales were down 70% on both Vancouver’s west side and in Richmond compared with a year earlier. According to the Finance Ministry, the two markets had the highest proportion of foreign buyers in B.C. before the tax was instituted. The impact of the foreign-buyer tax also caught other analysts by surprise.

“I was so wrong,” said Christine Duhaime of Duhaime Law in Vancouver, who is considered an expert on Asian real estate investment.

Prior to the tax being implemented, Duhaime had said, “ I do not believe it will have an impact on deterring foreign investment in the residential real estate sector” of Metro Vancouver.

Still, Duhaime believes the number of foreign buyers will continue to ramp up, noting they made up 3% of Metro home sales in October after falling below 1% in the month following the tax.

“There aren’t many jurisdictions where foreign nationals, especially with money, can move to with relative ease and speed with the combined ability to have financial services without impediment,” Duhaime said.

She added that a foreign buyer is tightly defined under the tax.

“The tax does not apply to PRs [permanent residents] or any foreign national who sets up a company in B.C. as long as no more than 25% of the shares are owned/held offshore. It also does not apply to a trust,” she said. “What is happening is an increase in the use of corporate vehicles and trust arrangements (where the entire structure is obfuscated) for expensive home purchases.”

“Do I believe the 15% tax will stop Asians, and particularly Chinese, from investing in Metro Vancouver? Absolutely not,” said Tina Mak, a realtor and founder and president of the Vancouver chapter of the Asian Real Estate Association of America. “It’s been tried in places such as Hong Kong and Australia, and it has not slowed the inbound investment from [mainland] China. Vancouver will be a preferred destination for foreign investors for many, many years to come.”

So Metro Vancouver and the rest of B.C. are going to get to know that formerly faceless foreign buyer a lot better next year. And the year after that •