By Emma Crawford Hampel | March 15, 2017, 2:05pm
Apartments in downtown Vancouver. The average rent for both one- and two-bedroom apartments remained unchanged in March | Shutterstock

It will still cost more to rent an apartment in Vancouver than in any other major Canadian centre, but it appears the gap may be closing, according to PadMapper’s latest rent report.

This is particularly true for two-bedroom apartments. The average Vancouver rent for this home type remained unchanged in March at $3,130 – the highest in the country. In second place was Toronto at $2,160, making the average two-bedroom rent 45% higher in Vancouver than in Canada’s largest city.

For one-bedroom units, the average Vancouver rent also remained stable in March, sitting at $1,900. This was just under 12% higher than the average of $1,700 in Toronto.

Although rent was stable in Vancouver in March, prices in this city will remain on an overall upward path, said Chrystal Chen, data analyst at PadMapper, because of high demand coupled with low supply.

“Many millennials are attracted to what Vancouver has to offer—job opportunities and great amenities from being such a modern city—but they cannot afford to own a home yet, so they turn to renting, which drives up demand,” Chen said. “The lack of available multifamily housing right now also feeds into the growing prices, since detached single-family homes can only house so many people.

“Until new supply—that can house more than just one family—is created, prices in this market will continue to rise.” 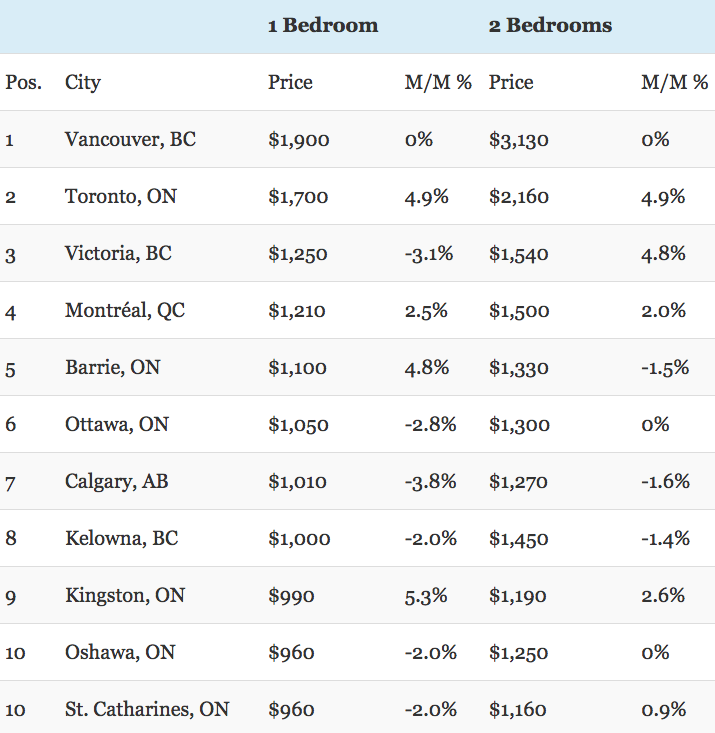