The supremacy of B.C.’s Big Four accounting firms is being challenged by smaller competitors such as MNP LLP and BDO Canada LLP, which are outpacing their larger counterparts in revenue growth and number of partners working in the province.

The Big Four, whose revenue and employment numbers have traditionally dominated the industry in B.C. and across North America, are Deloitte LLP, KPMG LLP, PwC and EY. When it comes to growth, however, MNP is on top. MNP was part of Laird, Sprague & Co., but in 1945 it split from the company that would eventually become PwC. 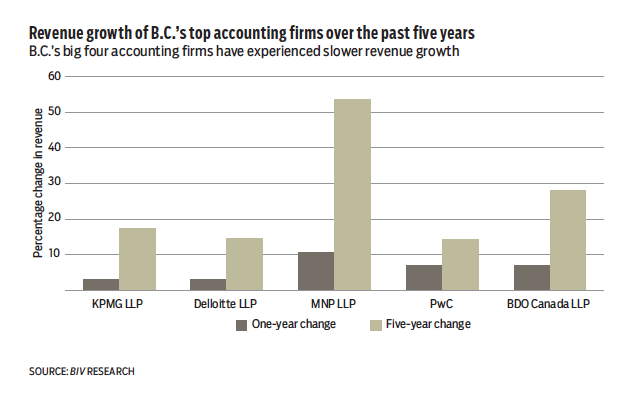 Revenue growth is not the only area in which smaller firms are challenging the industry’s leaders. In 2016, MNP surpassed each of the top four firms in the number of partners working in the province. MNP raised its tally of partners by 40%: to 132 in 2016 from 94 in 2014. According to information collected by Business in Vancouver, EY no longer holds a spot among the top five largest accounting firms in the province, after the number of provincial employees at MNP and BDO surpassed EY’s total. MNP has almost twice as many B.C. employees as EY has, and BDO’s total of local employees is 28% greater than EY’s. In 2017 MNP also surpassed PwC in its number of local employees for the first time. •