Skidmore Group president Garry Skidmore cautiously opens a door to the Presidents Room at the Terminal City Club and peeks into a temporarily unoccupied space at the private members’ club.

Piles of chairs are stacked in a higgledy-piggledy fashion and tables are mostly cleared.

Skidmore admires the room for a moment and then tells his visitor that his family has made a donation to the club, and that the room will soon be renamed the Skidmore Presidents Room.

“Soon, we will be able to hold meetings here and just say, ‘Meet us in the Skidmore room,’” he said. “That’s kind of cool.”

Earlier, while he was chatting with a guest in the club’s billiards room, a staff member greeted Skidmore by name.

“They get to know you here,” he said.

Although Skidmore’s office is in Burnaby and his company is readying to move its head office to Coquitlam, near the Ikea store, he has taken to hanging out at the Terminal City Club at least a few times a week. He jokes that this is because it is hard to find investment bankers who work in Burnaby.

“My new role is basically meeting people, networking with people – because, right now, for us, it’s about trying to find some acquisitions,” he said.

“We’re trying to find that good company that we can dig into. So I’m meeting investment bankers, lawyers. It’s a whole new world for me.”

Kicking tires on an assortment of potential takeover targets may be new for Skidmore, but he has a lifetime of business experience going back to when he started working at the family business as a teenager.

That family business was founded in 1946, when his grandfather, Art Skidmore, and Art’s brother, Herb Skidmore, launched an automotive-glass repair shop in New Westminster.

When car phones emerged as a status symbol in the 1980s, the Skidmores’ auto-glass stores started to install them. Their cellular business evolved into a public company – Glentel Inc., which operated about 1,400 cellular phone stores, under names such as Wireless Wave and Tbooth Wireless.

BCE Inc. bought Glentel in 2015 for $594 million and sold a chunk of the company for $392 million to rival Rogers Communications Inc.

“We’re not fully out of the glass business,” Garry Skidmore said. “What we’ve done is switch feet. I used to be the franchisor and now I’m a franchisee.”

Skidmore operates four Novus Glass locations in British Columbia and he has master-franchise rights for Novus Glass in the province.

His family also has a stake in cabinet manufacturer Kitchen Art Design, and a company that specializes in creating retail-store interiors, Apollo Sign & Millwork.

It’s clear that Skidmore is eager to diversify his family’s business.

“We’ve got a few [letters of intent to buy companies] out there,” he said. “You don’t know if they’ll ever come to fruition.”

The sectors that he is eyeing most closely for potential acquisitions are technology, retail and health care. His preference is to buy a controlling stake in companies for $20 million to $25 million.

“Let me be the majority owner but I say to people, ‘I want you guys to have skin in the game.’”

Born in Vancouver, Skidmore grew up on the North Shore and attended Langara College after graduating from West Vancouver’s Sentinel Secondary School in 1989.

“He sat me down and said, ‘Just so you recognize, Garry, if you want to continue to work in stores, keep doing what you’re doing. If you ever want to get into my corporate environment and learn that side of the business, that’s going to require a university degree. The choice is yours.’” 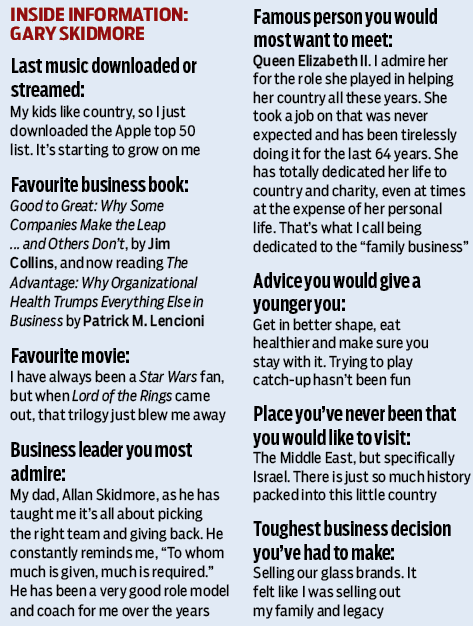 “Trinity Western University accepted me even though I didn’t have the highest of grades, and allowed me to register with them,” he said.

After he finished his business degree, he worked briefly in the family company’s credit and purchasing divisions.

Preferring to meet suppliers and discover interesting new products, he chose the purchasing division to make his mark.

“Even though his dad and his grandparents owned the company, when he worked with me, he worked just like any other employee,” said Zool Meraly, who was Skidmore’s supervisor and mentor in the late 1990s.

“He never gave the impression that he was son of the boss.”

In 2000, Meraly and Skidmore switched roles, with Skidmore becoming vice-president of the purchasing division.

Others commend Skidmore for being engaged with details of the business and for his generosity as a philanthropist.

“Garry is extremely disciplined,” said Mogan Daniels Slager LLP partner Ben Slager, who has acted as a lawyer for Skidmore and has also made some small investments with him.

“He and his group are quite well resourced, yet he gives the smallest deals the same amount of attention and focus – granular attention – as he does the million-dollar deals. I really appreciate that because I work with a lot of high-net-worth people who don’t take that approach, and they pay for it.”

When not working, Skidmore likes to travel and go fishing.

He recently returned home from a four-day excursion to a fishing lodge in the Queen Charlotte Islands with his three sons, Cameron, 20, Alex, 18, and Erik, 16.

The trip, one of his favourite getaways, is one he has made more than 20 times.

“This isn’t your economical fishing trip. It’s an experience trip is what it is.”

One example of some of the family’s philanthropy was a recent large donation to BC Children’s Hospital. The reconstructed hospital will acknowledge the gift in the name of the Alex Skidmore Renal Dialysis Unit, Skidmore said.

The donation was aimed at dialysis because Alex Skidmore has had two kidney transplants at the hospital.

Looking ahead, Skidmore can’t imagine retirement. Nor can his father, Allan, who, at 70 years old, is the company’s CEO.

Skidmore said he can’t recall anyone in his family ever retiring.

“We love the business,” he said.