Municipal budgets have become increasingly reliant on property taxes and development charges since the federal government began downloading costs onto provinces and municipalities in the 1990s.

But government taxes are not the only factor contributing to the rising cost of real estate ownership. Higher interest rates, permit wait times and stricter financial requirements for mortgages have also played a part.

The rationale behind speculation taxes and other levies on homebuyers is that they curb demand and runaway real estate prices.

“I think that the desired effect by the government, the Canada Mortgage and Housing Corp. [CMHC] and the Ministry of Finance is to let the air out of the balloon slowly,” said Chris Catliff, president and CEO of BlueShore Financial. “The art will be how successfully they do that; they certainly don’t want to pop the balloon. The worry is you may see a drop in price that could be quite precipitous, and if that happens too quickly it could really hurt the market and people’s livelihood.”

Government costs, including property tax and development charges, account for 26.2% of the cost of a new residential condo in Metro Vancouver, according to calculations by Paul Sullivan, senior partner at Burgess Cawley Sullivan and Associates Ltd.Community amenity contribution fees make up roughly one-third of the government levy costs and represent an estimated 7.3% of the final purchase price. Federal sales taxes account for the second-largest portion at a little less than 5% of the cost of a new home while the property transfer tax (PTT) paid on the purchase of an assembled site accounts for 2.4% of the purchase price. This is in addition to the PTT paid by the final buyer (1.8% of the final cost). 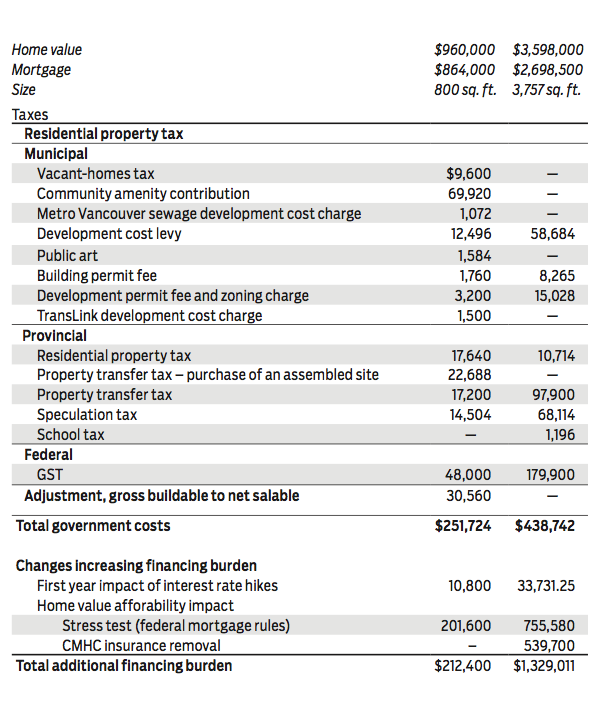 The government cost increase equates to approximately $94 per square foot for a $1,200-per-square-foot unit.

However, geographical barriers mean that the real estate market can’t respond to demand and make supply adjustments in the same way that other markets or industries can.

As a result, selling prices may not necessarily react as expected when costs increase.

Sullivan said the taxes will suppress demand for only a limited time.

Ultimately, he said, pent-up demand will make its way back into the market and drive housing prices up.

But not everyone agrees with this hypothesis.

Tom Davidoff, associate professor at the University of British Columbia’s Sauder School of Business, agreed that real estate prices typically return to levels they had reached before additional taxes were instituted.

However, he said, the subsequent price increases are caused by growing demand and not pent-up demand. The additional taxes help to curtail this growth, he said, adding that without the additional levy, housing prices tend to rise even higher.

But prices are set by what the market can bear; therefore, developers will likely push back on landowners to reduce the price of the land being developed rather than increase the selling price.

“Why would we tax people when they … show up to work or when they buy or sell something, instead of taxing the real estate that doesn’t go anywhere?” said Davidoff.

The first lesson of government revenue is, he said, “you tax the stuff that can’t run away.”

Property taxes, government levies and development charges are not the only costs contributing to the cost of housing. Early this year, the federal government made changes to mortgage rules, adding a stress test for all mortgages.

The mortgage stress test is used to ensure that a debtor would still be able to make mortgage if interest rates were to rise as they have been in recent years. The test was implemented to try and avoid the home mortgage crisis of 2007 from reoccurring. Practically, it results in people having roughly 21% less buying power according to Catliff. This means that new homebuyers will have to buy a less expensive house and those renewing a mortgage may be forced to stay with their current provider. This move came a little over a year after the Canada Mortgage and Housing Corporation stopped insuring high ratio loans on homes over $1 million. This means that the required down payment on these houses increased by 15 percentage points and buyers will ultimately have to put 150% more down.

“What that means is you can’t get a high ratio loan with a CMHC guarantee on property over a million dollars, which basically wipes out Vancouver,” said Catliff.

The views on what type of government intervention would be most effective in controlling rising housing prices is quite varied. Sullivan says that government intervention can be a contributor to rising housing prices in the region. While Davidoff is concerned that the uncertainty around charges like CAC fees is what is causing problems in the real estate market. Instead he suggests that there be a transparent auction process in awarding development projects allowing the government to charge the maximum the market can bare while not having the negative effects of uncertainty surrounding cost.

Catliff sees both rising taxes and uncertainty around taxes as ultimately contributing to rising housing prices. While it may be hard to sympatize with higher taxes on multimillion-dollar homebuyers, Catliff says that this ultimately affects the market down stream. Where families who own these homes and sell them, tend to buy multiple condos or town houses for them and their children rather than purchasing another large house and paying the additional tax. This reduces the supply and raises the prices of lower value homes.

There has been a major drop in price and activity in the single-family market that is now starting to be seen in some areas of the condo and town house market according to Catliff. However, he says that that the lack of supply should see a levelling out because of dampened demand by things like tougher qualifications standards and taxes.