With Canadian consumers expected to spend more this holiday season than last year and with Christmas four days away, retailers and those in the hospitality industry are grappling with some of the busiest days of the year.

Travel comprises the largest chunk of Canadian holiday spending (46%), followed by gifts (41%) and entertainment (13%), according to PWC. The global consultancy’s recent poll of more than 1,000 Canadians found that consumers plan to spend about 3.7% more than they did last year, with an average of $1,563 each. For men, the average amount spent is $1,752, whereas for women it is $1,385.

Among the flurry of surveys and end-of-year reports on holiday shopping is one from LowestRates.ca, which examined credit card use.

While many people use debit cards, cash, gift cards or new financial technology such as Apple Pay or Google Pay, the predominant form of payment for most remains credit cards.

“That sounds low to me,” said Retail Insider Media owner and consultant Craig Patterson. “We’ve got a record level debt in Canada right now. A lot of people are using credit cards.” 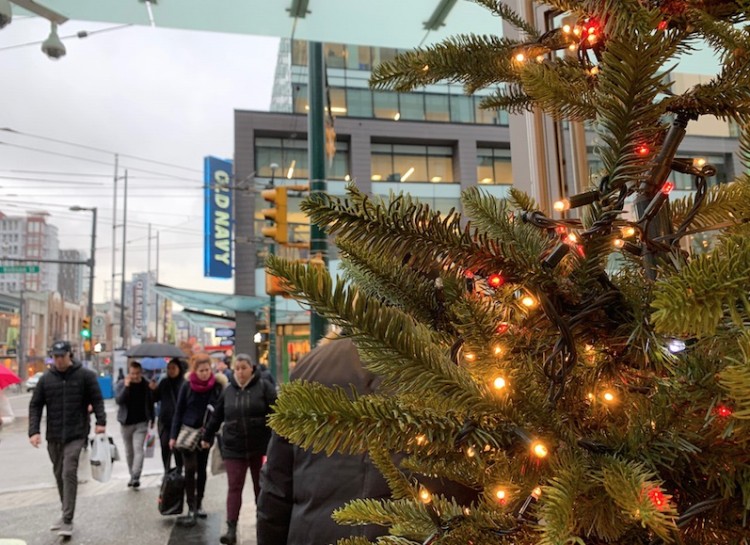 Perks and rewards were the main reason that 51% of Canadians used credit cards, according to a LowestRates.ca’s survey of 1,378 people. The credit card’s interest rate on debt was important for 42% of those who responded.

“Some people may be using debit cards if they are not able to use credit cards. There are a few holdouts using cash only, but that is an older segment of the population who may still use cash. But for only 63% of people to be using credit cards, that seems quite low.”

Another survey released this month was from Ebates.ca. It, like the PWC survey, showed that gifts were only a fraction of what Canadians spend money on during the holidays.

The Ebates.ca survey broke down the different percentages of Canadians who spend money on different spending categories.

For example, 92% said that they would spend money on entertaining friends and family.

Other breakdowns in the survey included that:

•71% said that they would spend on holiday décor;

•69% would spend on new clothes and accessories for holiday events; and,

•58% would spend on travel to see family and friends.

These secondary holiday expenses were expected to add an additional $528 on average to the $602 that the Ebates.ca survey found that Canadians are already spending on holiday gifts this season. Ebates.ca’s survey, therefore, pegged Canadians’ spending at a total of $1,130 each – or more than 27% less than the $1,563 that PWC expects Canadians to spend.

With so many surveys using different methodologies, it is no surprise that there are discrepancies.

The one thing that the studies agree on is that December is the biggest month by far for retail and that the holiday season is also peak season for those in the travel and hospitality sectors.