A stretch of buildings west of Clark Drive along East Hastings could be coming down to make way for a three-building development.

Developer Onni Group’s rezoning applicationf or the project, which is being considered under the Downtown Eastside Area Plan, proposes two 11-storey market condo buildings that feature 152 units in total, along with one eight-storey social housing building with 55 units. There would also be ground-level commercial space below all the buildings.

The development, designed by Yamamoto Architecture, would see several buildings from 1220 to 1298 East Hastings St. knocked down. 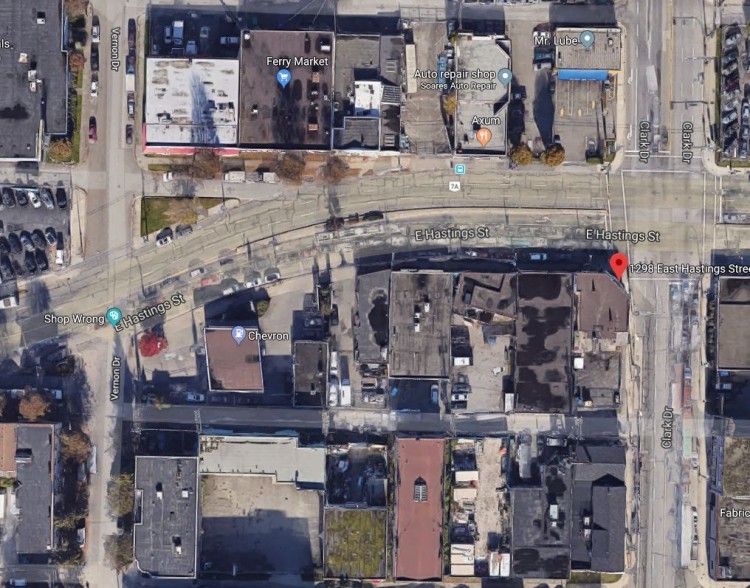 One at 1298 East Hastings, at the corner of Clark Drive, was built in 1928. It’s housed restaurants over the years, including Yolks, which relocated a couple of years ago, and Brave Bull’s House of Steaks, which operated for decades. That property was valued at $4.4 million on BC Assessment’s 2019 roll. 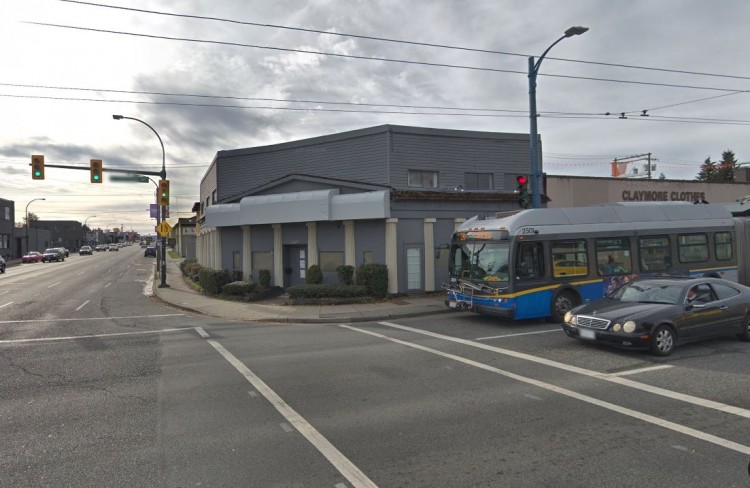 The building at 1298 East Hastings is vacant. Google streetview

At the opposite end of the development site, just before a Chevron station, is a building at 1220 East Hastings, which BC Assessment valued at $5.3 million in 2019.

One of properties in between those two buildings was valued even higher — $12.8 million for a two-lot parcel at 1268 East Hastings St. Another property, at 1252 Hastings St., was valued at $5.6 million.

The rezoning application is being submitted concurrently with another one for 560 Raymur Ave. because the Downtown Eastside Plan requires rezonings for the two sites to produce at least 20 per cent of all residential units as social housing. The applicant is proposing to consolidate their 20 per cent requirement into the eight-storey social housing building proposed for the 1200 to 1228 Hastings St. site. 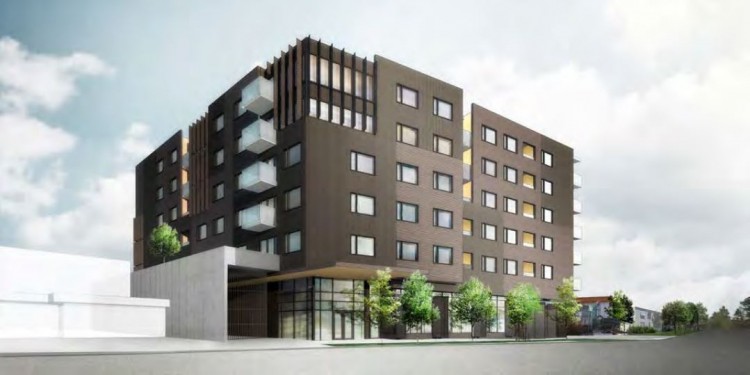 Over at the East Hastings development site, the social housing building would be sandwiched between the two market condo buildings.

Each of the three buildings would have its own residential lobby and function independently with the exception of the shared parkade.

“Breaking up the development into smaller buildings also helps achieve the urban design intent of the plan by enlivening East Hastings Street with a small grain of retail frontages that step in response to the sloping grade,” the application’s design rationale states.

Most of the existing buildings in the area are low to medium-rise. 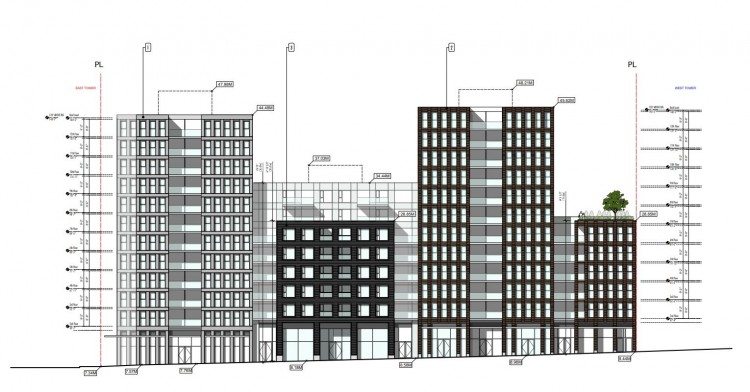 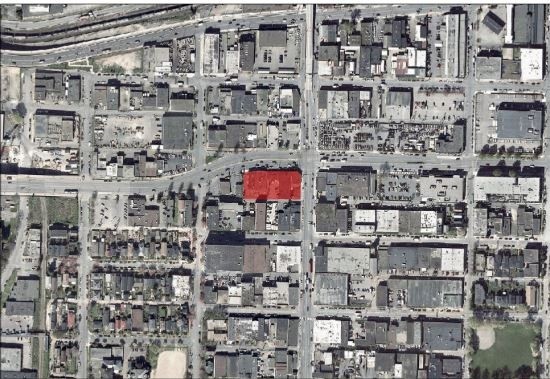 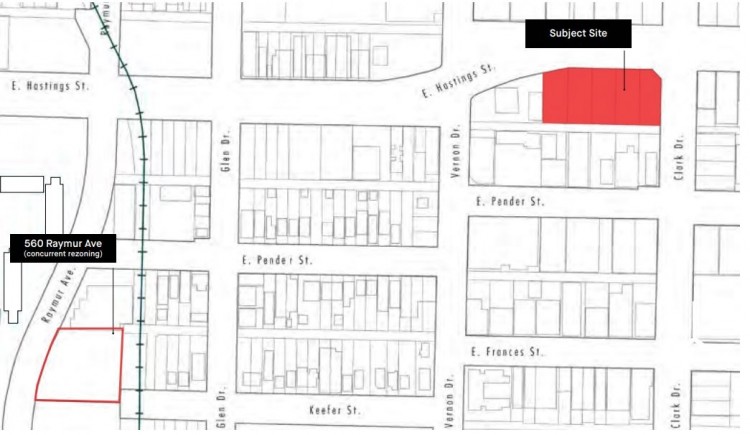 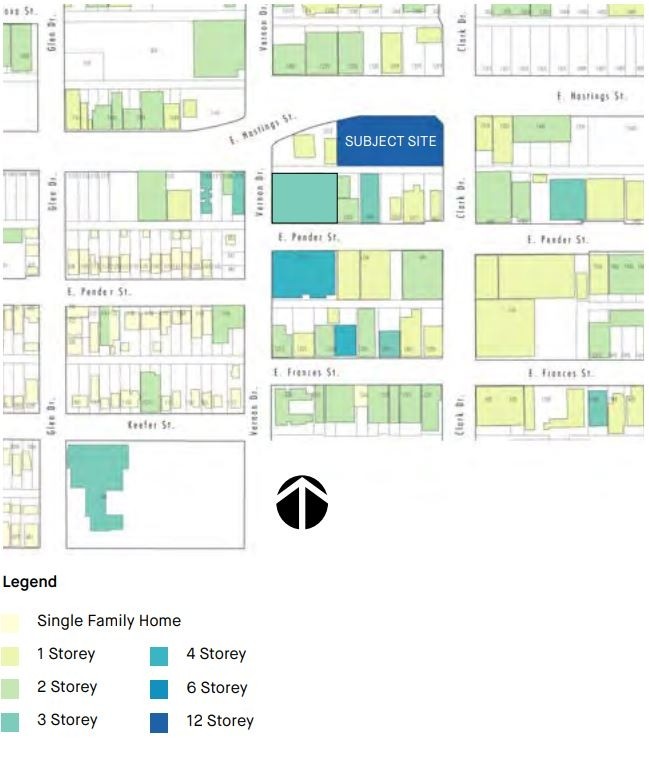 Heights of existing buildings in the surrounding area 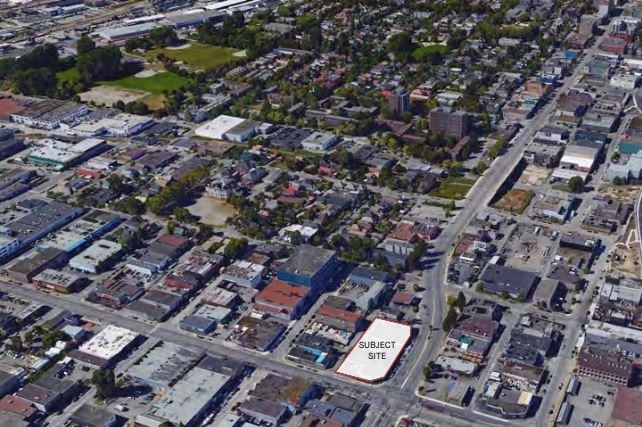 Context for the development proposed for the East Hastings site. 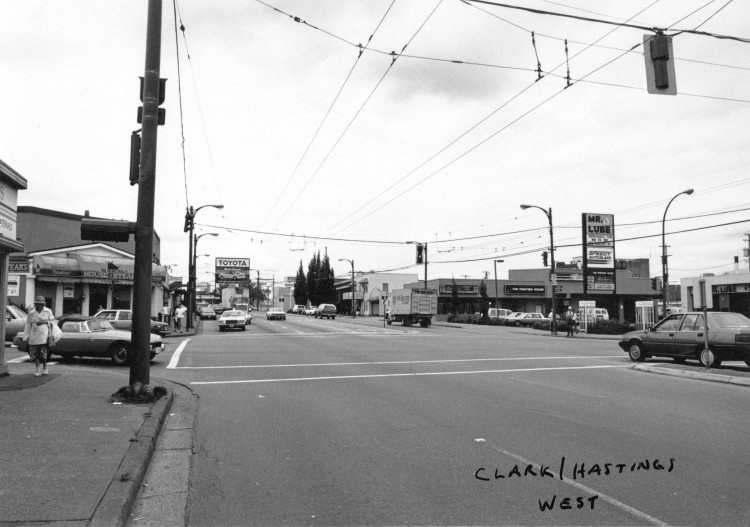 Clark Drive and East Hastings Street, looking west, sometime between 1980 and 1997 when the Brave Bull's House of Steaks sign was still up. City of Vancouver Archives CVA 772-1612