By Elisia Seeber, Vancouver Is Awesome | October 22, 2019
An owl pumpkin carving by Bruce Waugh at this year’s VanDusen Glow in the Garden | Photo: Lindsay William-Ross

As guests walk through VanDusen Glow in the Garden this year, there’s one word Vancouver sculptor Bruce Waugh is hoping to hear; ‘Wow’.

For Waugh, who has been carving Atlantic Giant pumpkins for about 30 years, the botanical garden’s magical Halloween themed light-show walk is considered a “special” time of the year.

He and fellow sculptors, including well-known artist Clive Cooper, have been helping bring the event to life with three-dimensional carved pumpkin characters since it began in 2016.

“In the first year at VanDusen we worked on 80 Atlantic Giant pumpkins,” Waugh recalled.

Every year the Glow event takes on a new theme, from last year’s whimsical enchantment with magical moments from Hänsel and Gretel to 2017’s spooky take on Alice in Wonderland.

This year, a new and improved light show and a B.C. wildlife theme has taken over the garden. 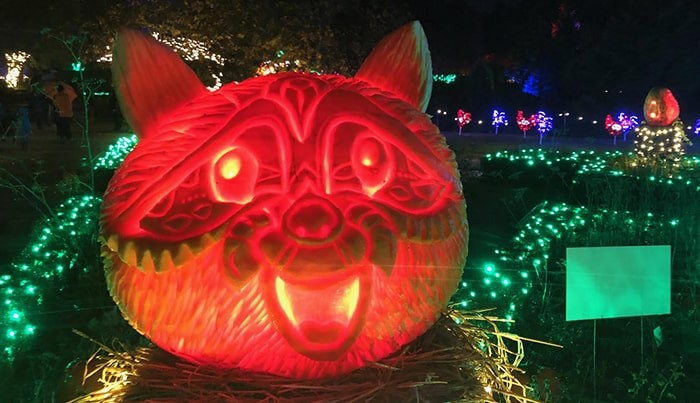 A raccoon pumpkin carving by Bruce Waugh at this year’s VanDusen Glow in the Garden. Photo: Lindsay William-Ross

Pumpkins too heavy to pick up — up to 100 pounds — have been carved into native critters to fit the theme. The thicker pumpkins offer more flesh for the artist to carve into.

“I’ve carved four Atlantic Giant Pumpkins as features and we’re doing about 50 other sculptures with pumpkins that look great lit up,” Waugh told Vancouver Is Awesome.

He has created two owls, a wolf and a raccoon so far.

“I can do really, really scary things but because VanDusen’s Glow is a family friendly event I wanted to keep it kid friendly and accessible, rather than have big scary monsters,” Waugh said.

Having said that, the wolf may give you a fright! 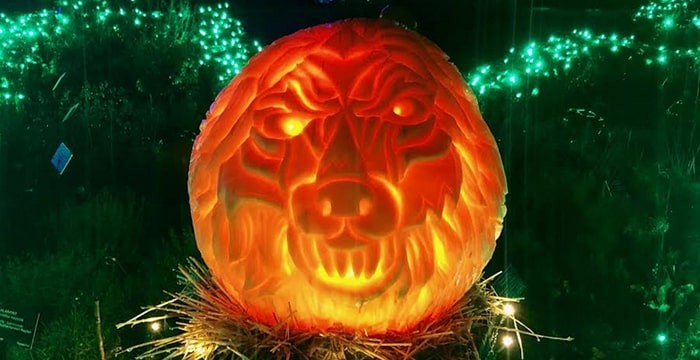 A wolf pumpkin carving by Bruce Waugh at this year’s VanDusen Glow in the Garden. Photo: Lindsay William-Ross

The giant pumpkins usually only last a week before they begin deteriorating and are then replenished with new carvings, so you’ll be in for a surprise if you head to the event this week.

Waugh can turn a giant pumpkin into an extraordinary sculpture in two to three hours using ribbon tools (often used in pottery) and a pairing knife, but that’s not all he can sculpt.

The 58-year-old’s talents stretch to other temporary mediums too. Waugh’s artistic career was sparked by an interest in sand sculpting in the late 1980s.

“There was a big sand sculpture contest in White Rock that I saw on TV that spurred me to look into it,” he explained.

“I did some research and then I thought; ‘I could do that.’ So I went down to the beach and did a practice sculpture and I got on the front page of the paper — it was my very, very first sand sculpture. It was very quick notoriety.”

From there, Waugh took his new found passion to a sand sculpture contest in Harrison Hot Springs in 1988 where he met his mentor, Alan Matsumoto. 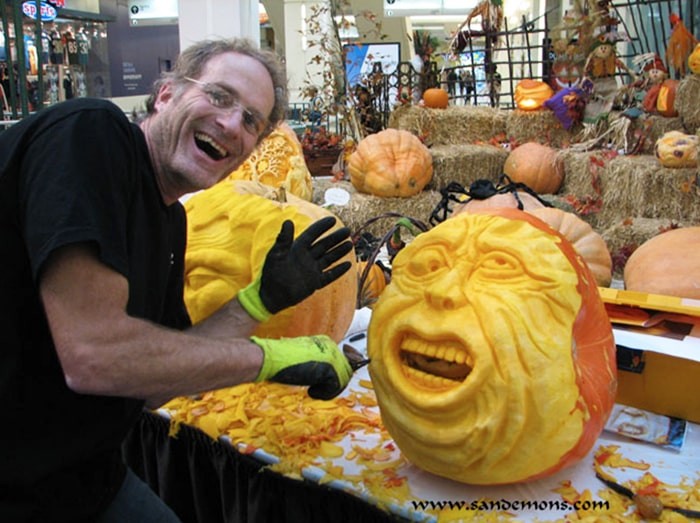 Vancouver man Bruce Waugh has been a sculptor for 30 years. Photo: sandemons.com

From creating sand structures, Matsumoto introduced Waugh to the world of pumpkin carving and ice sculpting all in a year.

“I haven’t stopped since,” Waugh said.

Waugh said he enjoyed working with all the temporary mediums because it allowed him to create big pieces of art in a short span of time.

“It looks good and it stays there for a while and then it goes back to the earth,” he said.

Even though he’s now paid to create magnificent works from pumpkins, ice and sand, Waugh maintains it was never “supposed to be a job.”

“For me this is a hobby blown out of proportion,” he said with a laugh.

Despite having sculpted hundreds and hundreds of pumpkins and at least 1000 different sculptures across all the mediums, Waugh doesn’t tire of the challenge to create new works of art and enjoys pushing his creative boundaries.

“It’s definitely a pleasure for me to sculpt, I’ve been doing this for so long and I still learn new techniques — you find a new tool, or a new method or somebody inspires you to do something different. I love that about it.

“You’re always, always learning when you’re sculpting like this.”

His sculpting has taken him on adventures all around the world for events and championships and he hopes it will continue in some capacity for the foreseeable future, even when he eventually retires.

“I have some peers that are 80 years old and still sculpting in sand. I’m hoping to be one of those travelling around and putting smiles on people’s faces,” he said. 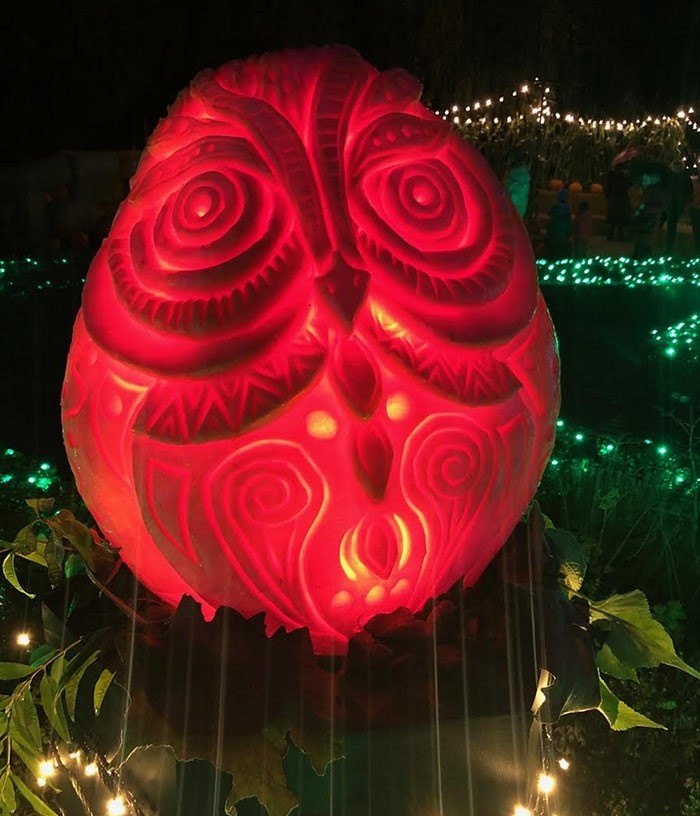 An owl carving by Bruce Waugh at this year’s VanDusen Glow in the Garden. Photo: Lindsay William-Ross

For now, he’s just hoping people will grab their raincoats or umbrella and enjoy a magical walk through VanDusen’s Glow In the Garden.

“I like to spend time, when no one knows I’ve made the sculpture, kind of spying on people to see their reactions,” he said.

“If I get a ‘wow’ in front of a pumpkin, then my job is done. That’s the satisfaction that I get.”

Many evenings sell out, so it is recommended visitors buy tickets in advance at VanDusen Glow.