By Sandor Gyarmati, Delta Optimist | February 10, 2020, 10:40am
An environmental assessment would still be required if the government chose the bridge option, even though an assessment was done for the bridge project by the previous government | Photo: Ministry of Transportation & Infrastructure

Will Delta get a new bridge after all?

That’s now a possibility as two options for a George Massey Tunnel crossing replacement were on display for residents at an open house Thursday, one being a new immersed eight-lane tunnel and the other being a long-span bridge with the same number of lanes.

The well-attended session at the Coast Tsawwassen Inn was a chance for residents to ask questions and provide their input as part of the transportation ministry’s consultation process.

The province is working toward developing a business case on a preferred option that will be completed later this year, said representatives at the open house, noting that while concept designs are being presented, more detailed technical work has to be completed.

Last year a task force of Metro Vancouver mayors endorsed an eight-lane immersed tunnel, but the provincial government has the final say.

The ministry notes the eight-lane immersed tube option would have a similar grade as bridge, while having low property impacts. It would also be taller inside than the current tunnel, requiring a deeper trench in the river.

The ministry notes that while there would be in-river impacts during construction, there’s also potential for in-river habitat enhancement.

The option would also be a shorter crossing, compared to a bridge, while having a comparable cost.

The tunnel project would have an estimated three-year environmental review and require five years of construction.

Also having dedicated transit lanes, a long-span bridge would have more height clearance compared to the Liberal government’s previous bridge plan, but the current tunnel would have work done on it to make it more “flood resilient” because the aging structure is prone to flooding.

According to the ministry, there would be no piers in the Fraser River for a bridge, however, they would be required in Deas Slough.

A bridge would also have long-term noise, light, visual and shading effects.

That project would have a one-to-two year environmental review and require five years for construction.

Asked by some attending the session why there would even be a need for an environmental assessment for a bridge, since that work had already been done with the previous bridge plan, ministry representatives said the two bridge projects are different, requiring a complex amendment to the previous completed assessment.

The environmental assessment office noted it would be up to two years for an assessment but it might also be completed in less time, they said.

They also stressed the long-span bridge option now presented isn’t as big a project as the previous bridge plan. 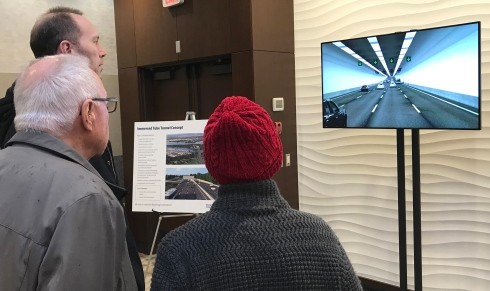 For the in-river sections, the new tunnel would be placed in a trench next to the existing immersed tunnel. The trench would be created by an open cut excavation

The go-ahead to initiate the environmental review for either option would happen in 2021, something that has Delta South Liberal MLA Ian Paton worried will result in a new crossing not available for a decade.

“This week we heard Transportation Minister Claire Trevena admit the Massey Tunnel replacement proposal will face even further delays and will still ultimately fail to take into account the future transportation needs of the region,” said Paton.

“Commuters needed relief years ago, but instead of action, the NDP continues to employ more sham consultations and stall tactics in what looks to be a determined attempt to delay this project for another 10 years. Not only did the NDP scrap a proposal by the previous government, which would have been $900 million below current construction estimates and would be 50 per cent complete by now, but Trevena has also now clearly stated that their consistently-delayed project will have no future capacity for rapid transit. Additionally, the Minister revealed the NDP has zero intention of ever bringing light rail south of the Fraser River, despite its steadily-increasing population and evolving transportation needs,” Paton added. 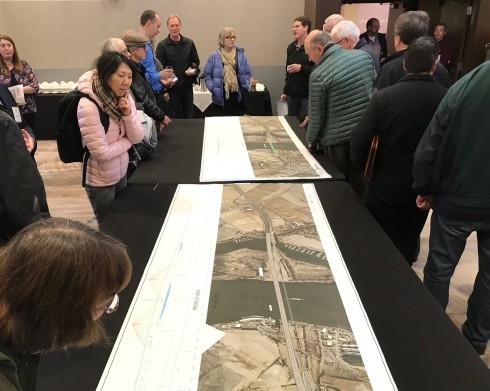 Also according to the ministry, an eight-lane crossing with transit priority incentivizes transit use, while eight lanes without transit priority generates overall network benefits but limits transit benefits.

The public is asked to submit feedback on the crossing project by Feb. 26.

It can be done online at masseytunnel.ca or e-mail GeorgeMasseyCrossingSCR@gov.bc.ca.

Meanwhile, work is also ongoing on traffic safety improvements at the current tunnel, a project estimated to cost $40 million.