By Mike Howell | July 2, 2020, 2:32pm
John Hendry Park is one of 10 parks in Vancouver proposed to allow the legal consumption of alcohol as part of a trial this summer. File photo Dan Toulgoet

Vancouver residents and visitors could be allowed to legally drink their own alcohol in parts of Stanley Park and at nine other parks by mid-July, according to a report that goes before park board commissioners Monday.

But for legal drinking to happen, commissioners will first have to approve the three-month trial at the 10 sites, which include sections of Vanier Park, Queen Elizabeth Park and John Hendry Park.

“I am going to vote for it, and I’m going to try to hopefully improve on what’s being proposed,” said Comm. Dave Demers Thursday, who didn’t want to elaborate on possible changes until Monday’s meeting.

If approved, then it’s up to the provincial government to amend the B.C. Liquor Control and Licensing Act, which currently doesn’t include the park board as an authority to create a bylaw for legal liquor consumption.

The report indicates the provincial government informed the park board that the intent of the Act was to allow the board the same authority as a local government to create a bylaw.

That clarification, however, wasn’t good enough for board staff, who were advised that such authority could be legally challenged unless the language in the Act is expanded to “explicitly include the park board.”

Attorney General David Eby’s office said in an email to Glacier Media Thursday that staff at the Liquor and Cannabis Regulation Branch continues to review the park board’s request for an amendment.

With the understanding that provincial legislation will soon be updated, park board staff drafted a proposed bylaw and selected sites for the trial. None of the sites call for liquor consumption across an entire park or allow drinking on a beach.

“Heat, alcohol and water is usually not a good mix, so we’re being conservative here, and going step by step, and not opening that door just yet [at beaches],” Demers said. 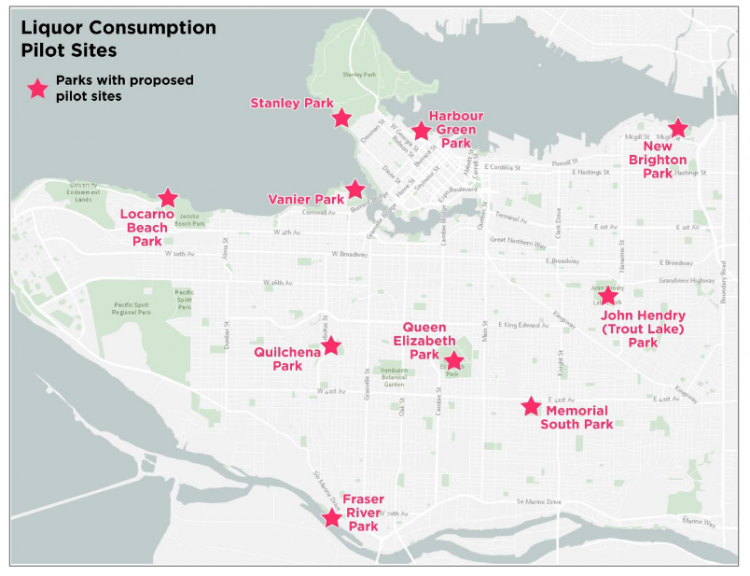 Vancouver Board of Parks and Recreation

Overhead maps attached to the staff report show sections of parks designated for legal drinking, including a large swath of more than 23,000 sq. metres of green space in Stanley Park near the tennis courts.

Park board staff used 13 criteria to determine the sites, including minimal impacts that legal alcohol consumption would have on area residents, proximity to food and beverage services, access to washrooms and to be far enough away from beaches where people swim.

Choosing sites that would reach residents across the city was also a factor in finalizing locations, with Locarno on the west side, Fraser River Park in the south and New Brighton Park near the Ironworkers Memorial Bridge.

The staff report proposes park users can legally drink between 11 a.m. and 9 p.m. daily, until the end of the trial on Thanksgiving Day weekend in October. Signs will be posted at each site with regulations.

Park ranger patrols will increase at the sites, with observations to be included in feedback of the trial. Any enforcement will be done by the Vancouver Police Department, which went on record at a city council meeting in May as supporting a trial.

“I support a measured approach in terms of a pilot study where we’re looking at the impacts before and after in the community, on those [drinkers] involved in the pilot, health authorities and on the police,” said Deputy Chief Howard Chow in a presentation to council. “If it’s something like that, with enough constraints and oversight on it, I think it’s very viable.”

Dr. Patricia Daly, the chief medical health officer for Vancouver Coastal Health, was less optimistic in her presentation to council. Daly said B.C. is the province with the highest per capita alcohol consumption rate in Canada and home to a “significant binge-drinking culture.”

She also pointed out the pandemic has had a great effect on the mental health of Canadians and that evidence showed 25 per cent of Canadians were drinking more alcohol.

Demers said the trial is aimed at adults who want to enjoy a glass of wine or a beer during a family gathering or a picnic. The focus is not on creating party zones for people to get drunk and rowdy, he said, pointing out illegal drinking already occurs in parks and at beaches.

“We’re not promoting alcohol consumption and putting posters everywhere and selling it at concessions — far from it,” he said. “I want to make sure we go after whoever abuses the situation, but I don’t want to punish good behaviour.”

The main driver in allowing the legal consumption of alcohol in parks is the recognition that not all residents have access to private outdoor space such as a backyard to have a drink.

That was the motivation for Demers when he first introduced a motion for a trial in December 2018. The park board amended that motion last month to better respond to needs of people shut in during the pandemic.

Though city council has no jurisdiction over the parks and beaches, it was unanimous last month in urging the park board to proceed with a trial. Some councillors also noted it was important to recognize that people of colour and others — as council heard in a presentation from a Black resident — fear being targeted for drinking in public more than a Caucasian person.

Last week, council approved a motion to allow legal drinking at select public spaces such as plazas. Staff is now drafting a bylaw and choosing locations, with the intent to launch a trial this summer.

A report is expected to go before council at the end of the month.

Such moves by the park board and city council put Vancouver closer to a group of cities around the world, including Germany, Japan and Montreal, that allow the legal consumption of alcohol in public.

Locally, the City of North Vancouver recently approved public drinking in select parks, making it the first jurisdiction outside of Quebec to do so.

Monday’s park board meeting to decide on a trial in parks begins at 6:30 p.m. It will be livestreamed on the park board’s website.