Three young Vancouver entrepreneurs aim to do what large clothing manufacturers have passed up the opportunity to do for decades – successfully produce and market winter jackets that contain battery-powered, interior heating panels.

Industry veteran Chip Wilson, who has investigated this clothing niche for decades, told BIV that he doubts there is money to be made by selling battery-heated jackets, but said successful entrepreneurs often face skeptics.

“I’ve been looking at that market for a long time and I can’t see the demand for it,” he said. “But when I got into surf, skate, snowboarding and yoga, people thought I was crazy, and it would never work, so I would hate to say that something is not going to work for somebody.”

Daniel McGill, Saam Rahim and Brandon Yu – all in their 20s – co-founded Sol Heatwear with the aim of capitalizing on the trend toward wearable technology. They have started to test demand for battery-heated jackets via the crowdsourcing platform Kickstarter.

Sales launched today (October 1), and Rahim told BIV that the trio have already sold more than the $15,000 worth of jackets that they needed in order to go ahead with a production order. Jackets today are on sale for 50% off, or $145 each. A reduced discount will continue for at least the next week, where the jackets will be priced at $170 each.

The puffy, down-filled jackets have flexible heat panels on the back and around the stomach area. Initial orders will be for black jackets, but Rahim said that if sales soar past the $50,000 threshold, other colours will be possible. 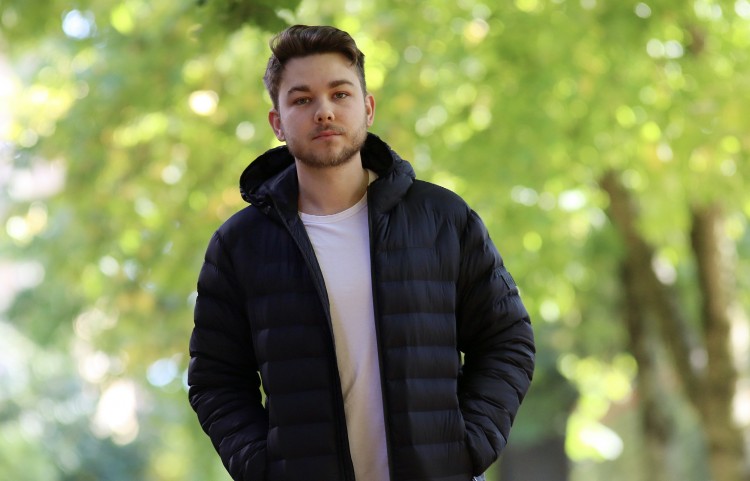 (Image: Sol Heatwear co-founder Daniel McGill models a specimen for the jacket that his team is launching | Rob Kruyt)

One added perk for buyers is that the iPhone-sized battery necessary to heat the panels, which fits in a pocket, can also charge devices, such as smartphones.

Each of the entrpreneurs is passionate about e-commerce, and combined, they have experience with various e-commerce startups, digital marketing and sales on Amazon.com Inc. (Nasdaq:AMZN). They plan to manufacture the jackets at a Chinese factory that they found through Alibaba (NYSE:BABA), and they have made a handful of specimens, after much back-and-forth with the factory about customized designs.

Customers will be able to buy men’s and women’s jackets in a range of sizes, Rahim said. The outerwear has a button to initiate the battery power, and an iPhone app can control temperature via Bluetooth technology to set specific desired temperatures. 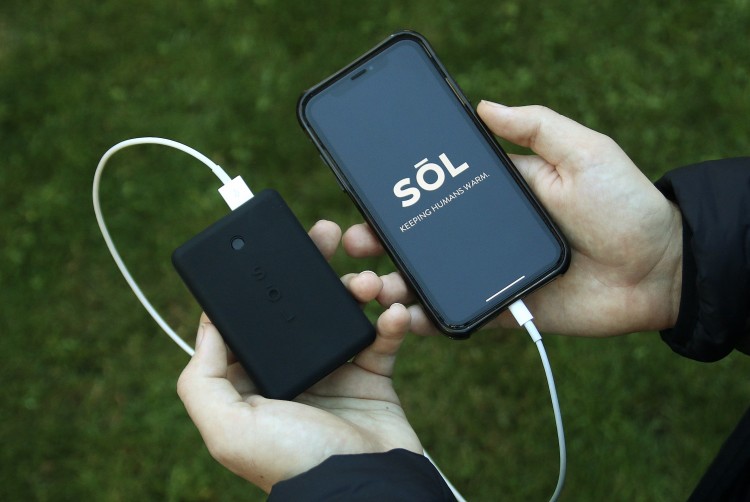 (Image: This is the battery pack that can be connected to the jacket to warm internal heating panels. It can also charge a smartphone | Rob Kruyt)

Clothing heated with electricity has been around for many decades but has not gained widespread adoption. U.S. inventor Samuel Irwin Russell is credited with inventing the electric blanket in 1912. Companies such as Gerbing produce battery-powered jackets for motorcycle riders, but the Sol Heatwear founders say their competition is likely Ororo or Ravean, which focus on the fashion market.

Retail analyst and Retail Insider Media owner Craig Patterson told BIV that one reason consumers may be wary about buying battery-heated jackets is a fear that they will catch fire.

Wilson, however, said another reason is that fabric and clothing production methods mean that jackets can be plenty warm without clunky gadgetry.

He pointed to some multi-layer jackets that Vancouver-based Arc’teryx produces that keep warmth inside, particularly when the jackets are put on inside. Wilson is a large investor in Finland’s Amer Sports Oyj, which owns Arc’Teryx.

Other large retailers of winter coats, such as Canada Goose have also neglected to make jackets with battery-powered warmth.

Wilson said that if there is a market for battery-warmed jackets, it would be for women because women often feel cooler, likely because they often have smaller bodies.

(Image: A button on the jacket activates the battery, while a smartphone app can help the wearer get a more specific desired temperature | Rob Kruyt)

During Wilson’s several decades in the fashion business, he has investigated various kinds of clothing that connect to gadgetry, he said.

Vancouver’s Lululemon Athletica Inc. (Nasdaq:LULU), which Wilson founded, in the early 2000s sold women’s bras that had electrical attachments that could determine heart rates and other health information, and be detached for laundering.

Demand for the bras was limited, Wilson said.

He said that the concept of launching a fashion product online, via a crowdsourcing platform, could be a smart strategy because it entails no lease costs for a bricks-and-mortar location, and it immediately identifies whether there is demand for items.

“I can’t imagine any factory doing less than 2,000 pieces to make money on something,” Wilson said. “So maybe what [Sol Heatwear] is doing is they are giving the 150 jackets away at their cost.”

The obvious risk for buyers in any project on Kickstarter is that the transaction may not go as planned. A study published on the Kickstarter webpage notes that 9% of Kickstarter projects failed to deliver rewards, 8% of dollars pledged went to failed projects and 7% of backers failed to receive their chosen reward.