Mine revenue pulls back after five-year high

Despite the recent downturn, however, average revenue at the largest mines remained ahead of 2015 by 24.3%. 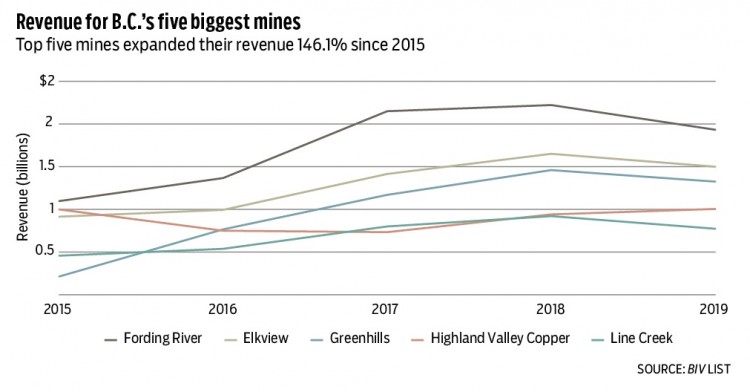 At the same time, the median revenue for B.C.’s biggest mines flatlined at roughly $400 million for the past three years after peaking at $496.5 million in 2016. This suggests that smaller mines lower on the list have not experienced growth over the period, while larger mines higher on the list have.

All but one of the top five mines in the province followed the trend of the average, experiencing varying levels of growth from 2015 to 2018 before falling in 2019. No. 4 Highland Valley Copper, near Logan Lake, had its revenue sink to a low of $733 million in 2017 from $999 million in 2015. But the mine, owned by Teck Resources (TSX:TECK.B), has since recovered and in 2019 it boasted a five-year revenue high of $1 billion. Highland Valley Copper was the largest mine to experience revenue growth over the past year and was one of only five companies on the list to do so.

No. 15 Silvertip, near the Yukon border, had the largest one-year revenue growth on the list, increasing 248% to $56.6 million in 2019 from $16.3 million in 2018. Silvertip’s results helped boost the average one-year growth on the list to 7.6% despite most companies experiencing revenue declines. When Silvertip is excluded, the average revenue fell at a rate of 8.4%. The median revenue declined by 9% and  was more reflective of the list’s performance