Vancouver’s South Granville neighbourhood has suffered a net loss of businesses during the COVID-19 pandemic.

“We had a 4% vacancy rate in February and now we have a 6.5% [vacancy rate],” said Ivy Haisell, executive director of the South Granville Business Improvement Association, adding a 6%-to-9% vacancy rate is still considered healthy.

The retail district is home to about 200 businesses, but over the course of the pandemic 12 have moved in while 19 have moved out.

Haisell said limited parking continues to hurt the district to the point that most business can only be done from 11 a.m. to 2:30 p.m. Restaurants are struggling the most, she added.

“They’re doing a really good job about maintaining their health. We haven’t really had any health scare in South Granville. Health, of course, is a very important priority but who can be sure who’s going be here at the end of all of this?” 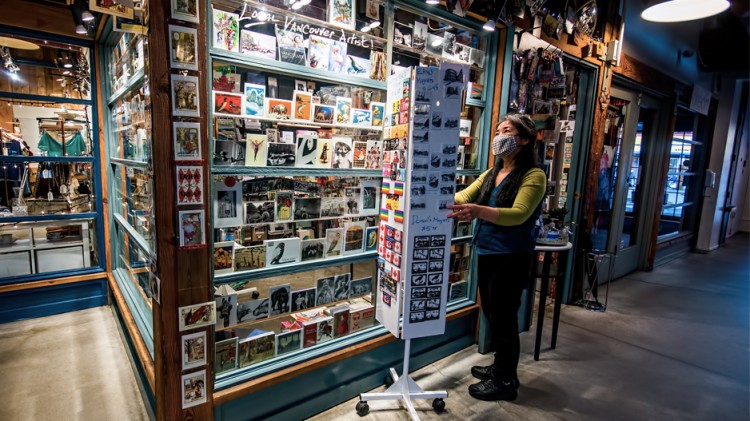 Owner Masami Hanashiro arranges a display at the Postcard Place, which has been in business on Granville Island for 32 years | Chung Chow

On Granville Island, meanwhile, “the overall feeling … among retailers is fairly optimistic under the circumstances,” said Lisa Ono, Granville Island’s manager of public affairs, adding that the tourist hotspot reported its busiest weekend of the year from October 30 to November 1.

She said many businesses are shifting to online sales and relying more on local patronage rather than tourists.

“What we’re hearing from some of our retailers is that people are telling them that they’re rediscovering Granville Island,” Ono said. “Very few permanent businesses have closed or somewhat reduced hours.”