Water levels in the North Shore’s drinking water reservoirs remain close to normal – so far – despite near-record levels of water consumption during the four days of the region’s unprecedented heat wave.

Daily water consumption in Metro Vancouver hit 1.79 billion litres on June 27, just shy of the all-time record for water use set in 2009, when the region sprinkled, splashed and soaked its way through almost two billion litres in a single day.

So far, the region’s water supply is holding up.

Levels in the region’s three water reservoirs – including Capilano and Seymour reservoirs in North Vancouver and Coquitlam Lake – were at about 253 billion litres of storage as of June 28 – just slightly below the levels recorded last year at this time. Those are well within what’s expected, and remain significantly higher than the 223 billion litres of storage recorded at that time in 2015 – an exceptionally dry year.

Despite that, politicians and water managers are urging conservation, pointing out that it’s unprecedented to see such high water usage this early in the summer. Usually the Vancouver region hits its hottest days and peak water use in July or August.

In West Vancouver, the Eagle Lake reservoir ­- which together with Montizambert Creek supplies between 40 and 45% of the district’s water supply – is actually sitting above average levels for this time of year, said District of West Vancouver spokeswoman Michaela Garstin. Data from West Vancouver’s water filtration plants showed consumption in the last 10 days of June have been up over last year’s.

Some of the biggest increases were logged during the recent heat wave.

In Metro Vancouver, water managers reported this spring that snow pack in the mountains feeding to local reservoirs was at about 120% of the historic average. But much of that melted sooner than expected with high temperatures in May and June.

Historically, winter water use of about one billion litres a day in Metro Vancouver can increase by 50% in summer – much of that used for outdoor watering.

Under the region-wide regulations in effect until Oct. 15, residential lawn watering is allowed twice a week, in the mornings only. 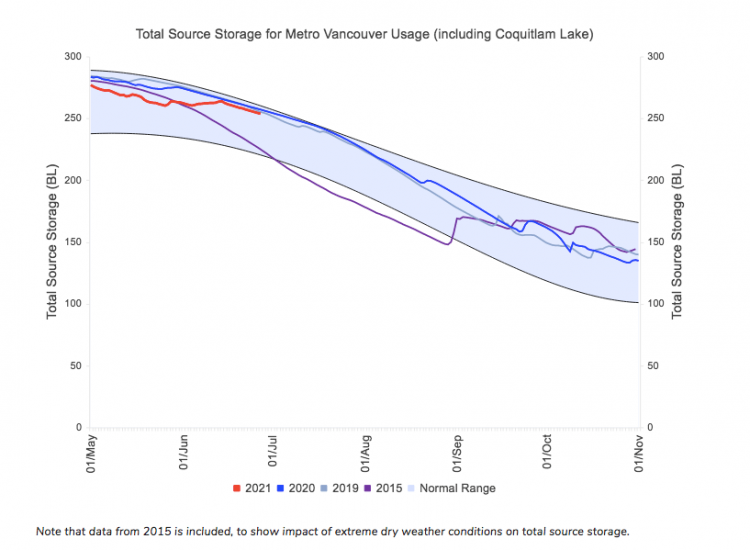 This graph shows storage levels in Metro reservoirs are currently in the normal range for this time of year | Image: Metro Vancouver

According to Metro Vancouver, per capita water use has declined in the past two decades – both through conservation efforts like sprinkling restrictions and low-flush toilets and through demographic changes, such as fewer people living in single-family homes with big lawns and gardens.

Long-range climate projections for Metro Vancouver show the region can expect more than double the number of summer days above 25 C in the future, however.

As the region’s population continues to grow, the overall water demand is also predicted to increase.