The past five years have been a roller-coaster ride for B.C.’s biggest corporate finance deals, with large fluctuations in the values of the largest stock and debt deals as well as the biggest non-mining mergers and acquisitions.

But despite the interim volatility, values have either remained the same or grown since 2017, according to data collected on Business in Vancouver’s Biggest Stock and Debt Deals of 2021 list and Biggest Non-Mining Mergers and Acquisitions of 2021 list (https://biv.com/lists).

The median stock and debt deals value peaked in 2018 and crashed the year after. While median deal value is 9.1 per cent higher than it was in 2017, it dipped 8.1 per cent over the past year, trending away from its 2018 high. This suggests that larger deals higher on the list have grown while smaller deals lower on the list have decreased in value. 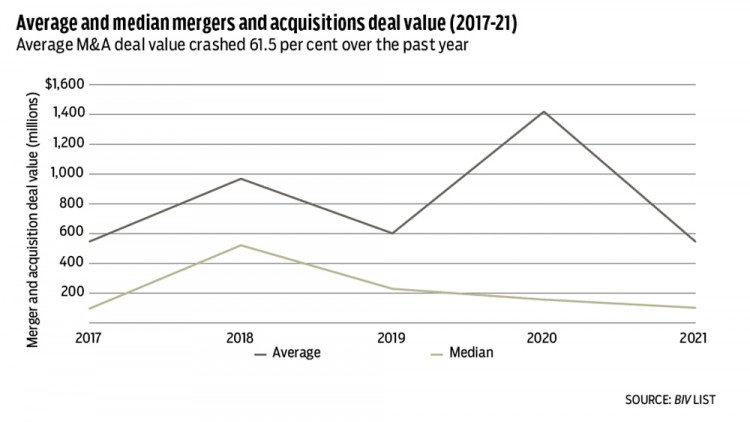 Average non-mining merger and acquisition values have had a more bumpy ride, and, despite hitting new highs in 2018 and 2020, average M&A deal value has slumped back to its 2017 level.

The median M&A value, on the other hand, has been consistently declining since its peak in 2018. This suggests that smaller M&As lower on the list have been decreasing in value over four years while larger M&As have experienced more volatility. •