In 48 interviews, Elders recounted decades of fishing experiences and how they fear factors out of their control — like climate change, fish farms and disease — put salmon most at risk.

By Stefan Labbé, Glacier Media | May 13, 2022, 11:19am
A Tŝilhqot’in Elder at Tl’etinqox Culture Camp was among 48 knowledge keepers interviewed to understand how they perceived the long-term health of Pacific salmon. | Andrea Reid

In B.C.’s biggest rivers, salmon stocks have dropped to one-sixth of levels seen 50 to 70 years ago, according to interviews with 26 First Nations knowledge Elders across the province.

The interviews were conducted as part of a sweeping research project with 48 knowledge keepers from 18 First Nations — stretching across the Fraser, Skeena and Nass rivers. Of those, more than half said salmon stocks had dropped an average 83 per cent below their historic abundance.

“The history of fisheries in B.C. is dark,” said Andrea Reid, a Nisg̱a'a citizen and principal investigator for the Centre for Indigenous Fisheries at the University of British Columbia.

“That history was about taking and not giving back.”

Since the European colonization of B.C. took off in the mid-1800s, settlers set up canneries and took the best fishing grounds using thousands of years of Indigenous experience on where and how to fish, said Reid.

At a time salmon fisheries face historic lows, the researcher added that the series of interviews offers a conduit to take that knowledge back and make it legible for the world.

“Fisheries don’t exist without people in the equation,” said Reid. 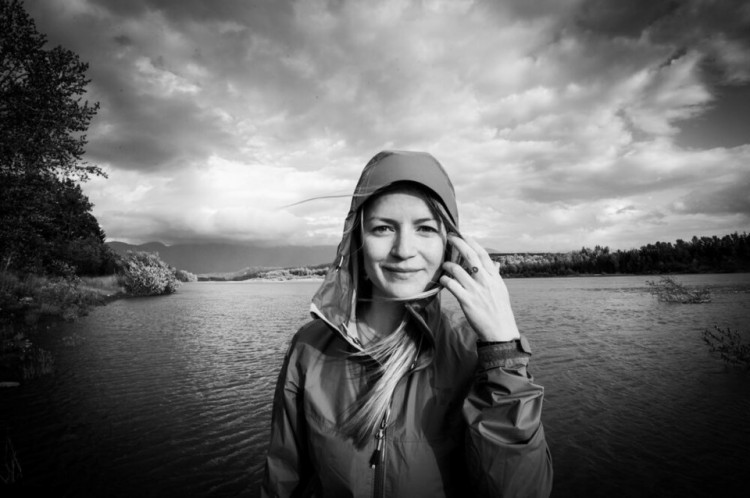 A way back to Nisg̱a'a

In the summer of 2018, Reid packed her car and set off on a work trip that would turn into something more.

A member of the Nisg̱a'a Nation, Reid’s family had faced a violent history — her grandmother is a survivor or the residential school system and her father was a victim of the Sixties Scoop, a roughly 20-year period when the Canadian government forced the mass removal of Indigenous children from their families into the child welfare system.

“I didn’t get to grow up with Nisg̱a'a culture, ceremony, practice — any of that,” she said.

What she did have growing up 4,500 kilometres away on Prince Edward Island was a life surrounded by water and fish.

As an adult, Reid would go on to spend time in fishing communities across the world, in places like Uganda, Indonesia and the Solomon Islands.

All of that work with Indigenous fisheries was heavily invested in Western science — as Reid puts it, “I came at it from a fishy perspective.”

But as her research led her to explore B.C., things changed.

Four months of road trips, flying in small aircraft to remote towns and spending long weeks with communities helped her regrow the roots she never had as a child.

“I was driving around camping everywhere,” Reid said. 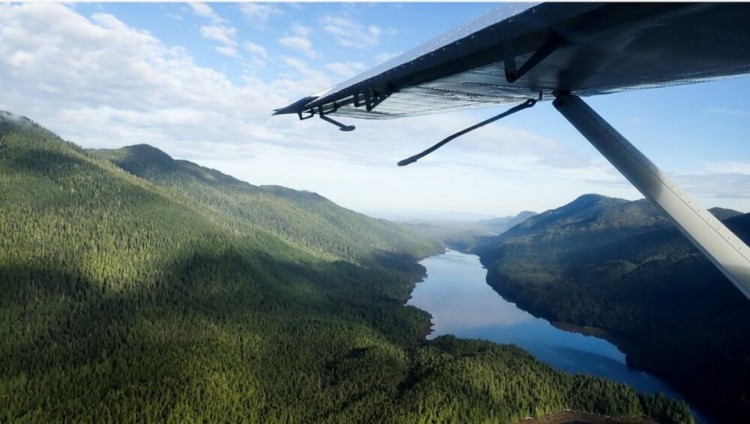 
Some communities, like the Musqueam in Vancouver, were easy to access. Others required Reid to drive down the back end of forest service roads near Fort Babine or visit the remote village of Ging̱olx, opposite the southern end of the Alaska Panhandle.

One Elder she met in Burns Lake was set on taking her to traditional fishing grounds. The interview took place as they bounced down a road in his truck, down winding paths and in a canoe.

Others were carried out on the back of a four-wheeler, in a smokehouse or along the river's edge.

All of the interviewees were chosen through a tortuous process, where Reid would attend a community meeting, feast or culture camp to get consent from Elders or council and ask who was best placed to answer her questions.

“What became very clear — the same names kept getting repeated back,” said Reid.

All of the 48 people Reid settled on were Elders or Elder-in-training between age 56 and 93. The mix of chiefs, matriarchs, ceremonial leaders, medicine people, and former or active fishers came from the Katzie, Nat’oot’ten, Nisg̱a'a, Stó:lō, Secwépemc and Tŝilhqot’in, among others.

“For so many of the people I spoke with, they began fishing from the time they could walk,” she said.

They would tell her, “‘Salmon is part of who we are.’” 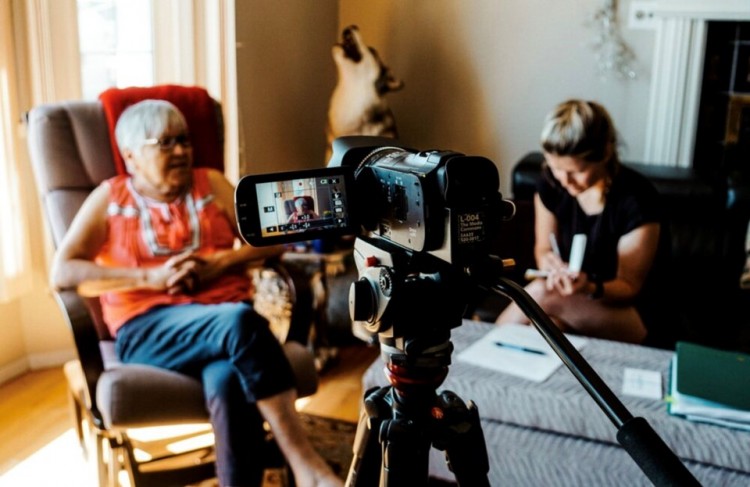 
To quantify how much salmon had disappeared from the communities’ local fishing grounds, Reid’s interviews began by asking questions about how much they could catch today at a specific location.

She then worked back in time, asking “How many salmon did you catch then?”

Some might say they caught 10 per day or 100 per week. Other Elders would count the fish netted or hooked by the hour.

Of the 48 interviewees, 26 said they had enough knowledge to answer those questions.

The 83 per cent average drop in salmon abundance tracks well with other trends in access to salmon for First Nations, as well as past research which paints a broader decline in freshwater life across the world over similar time frames.

The number also masks some regional differences. Along the Fraser River, declines were even lower, something that tracks with government statistics in recent decades.

Fish farms, climate change and commercial fishing were identified as the biggest dangers to Pacific salmon, according to the Elders.

The Indigenous knowledge keepers also raised concerns over industrial development as well as a combination of contaminants, hydro developments, poaching and infectious disease.

As one Nisg̱a'a Elder who has since passed away put it to Reid, “Who are we as Nisg̱a'a without salmon?”

For a long time, if Indigenous knowledge was used at all, it was used to fill in the gaps of Western science, says Reid. Rarely did it drive home the reality that Elders can offer a radically local perspective that respects a single tributary’s ecosystem and the tailored recovery plan it requires.

“We have to engage people if we want to take care of fish,” said Reid. “They want this kind of information known.” 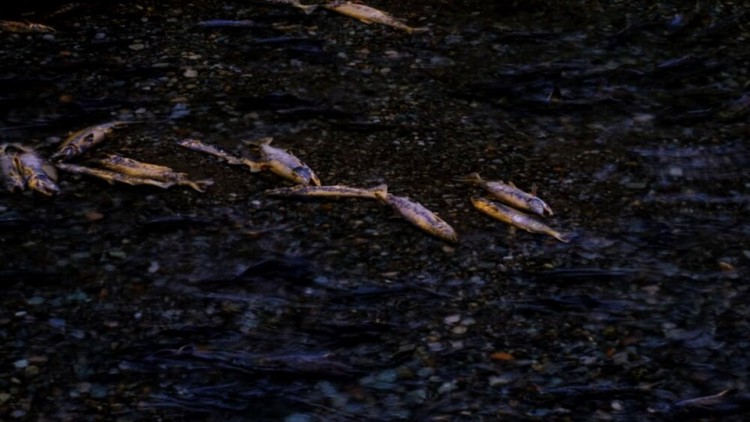 Chum salmon at the end of their life cycle at Fish Creek. Andrea Reid


But in her interviews, many of the threats to salmon identified by the Elders were beyond Indigenous control.

In one surprising turn, Reid said that a third of Elders spontaneously spoke of the dwindling quality of their waterways.

Marked by loss, the long interviews were emotionally gruelling, said Reid. But at the same time, the experience offered a path forward — by putting the destiny of fish back into the hands of people who know and rely on them most, they may have a chance at survival.

“I’m often reminded by my Elders of the very real responsibilities we carry as Indigenous people in this country,” said Reid.

“We have a unique role to take on this government… to take it to court to advocate on behalf of the fish and the water.”