In the early 1990s, Vancouver’s income and housing balance was slightly better than Seattle’s. It’s a much different story today

By Jen St. Denis | October 27, 2014, 11:00pm
Major corporations have helped turn the Emerald City into an economic titan, while Vancouver incomes are among Canada's lowest.&nbsp;Credit: Shutterstock

Before Trevor Barnes began a research project comparing the economies of Seattle and Vancouver, he was “a bit snooty” about the city he’s called home since 1983.

“I thought Vancouver was by far the superior city, and it may well be in terms of environment, but not in terms of economy,” said Barnes, a professor at the University of British Columbia who studies economic geography.

“We are just pathetic in relation to Seattle.”

To observers of Vancouver’s economy, the city’s economic engine increasingly appears to be stuck in neutral. Despite a growing tech sector, renewed activity in film and TV production and stalwart sectors like financial services, incomes continue to lag behind those in other Canadian cities and have even fallen in the past few years compared with other metropolitan areas.

“It’s not a new problem, but perhaps it’s gotten more salient because of the rise in housing prices,” said Jock Finlayson, an economist and chief policy officer at the Business Council of British Columbia.

He noted B.C.’s economy hasn’t done that badly in recovering from the recession, “but people in the Lower Mainland really feel they’re falling behind with the cost of living and housing with the incomes they can earn.” In 2008, Metro Vancouver’s median income ranked 20th out of 28 census metropolitan areas, above Toronto and Montreal. By 2012, those cities had surpassed Vancouver, which had fallen to 24th place. 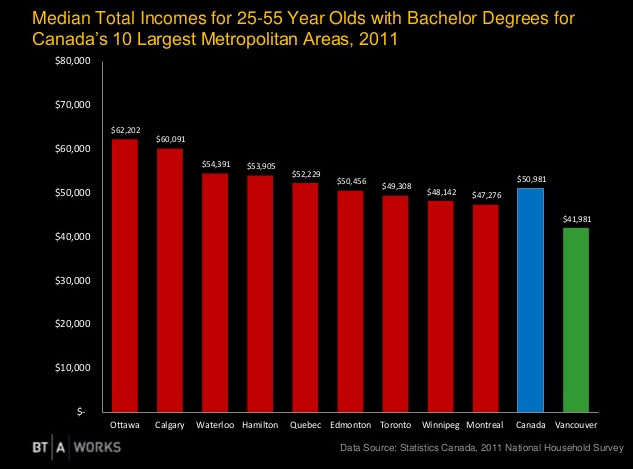 But it’s not just residential real estate that’s sky-high: office and commercial property values have also raised the cost of doing business in the city.

“What happens when we’re such an expensive region to be in, not only in the United States but across Canada?” Yan asked.

Yan observed that in the early 1990s, Vancouver’s income and housing balance was slightly better than Seattle’s. It’s a much different story today.

Both cities started out as West Coast resource towns dominated by forestry. Barnes said the size and importance of that sector began to shrink dramatically through the 1980s and 1990s. At the same time, cities were becoming increasingly important as globalization took hold.

“The new economy that emerges [in Vancouver] is based on relatively small firms, but it’s never enough to sustain what’s going on,” Barnes said. “The Vancouver economy is buoyed up by its real estate market. Vancouver becomes increasingly a resort city within this larger global urban structure.”

Seattle had something Vancouver didn’t: Boeing (Nasdaq:BA). The aviation and aerospace company, founded in Seattle in 1916 by a man who got his start in the forestry business, would provide a “propulsive” force for engineering and computers. Today, Seattle is home to several of the world’s largest corporations, including Microsoft (Nasdaq:MSFT), Starbucks (Nasdaq:SBUX), Amazon (Nasdaq:AMZN) and Costco (Nasdaq:COST).

When it comes to creating its “new economy,” Barnes said Vancouver has had a few moments, such as the growth of the video game and film industry in the 1990s. But those sectors later shrank as other regions attracted business through competitive tax credits.

Despite Vancouver’s high cost of living, young people and immigrants keep coming here. That’s both good and bad for the city, Finlayson said.

“Living here is the primary goal rather than finding employment. You have a situation where tech companies and law firms … can often pay people less to do similar work.” 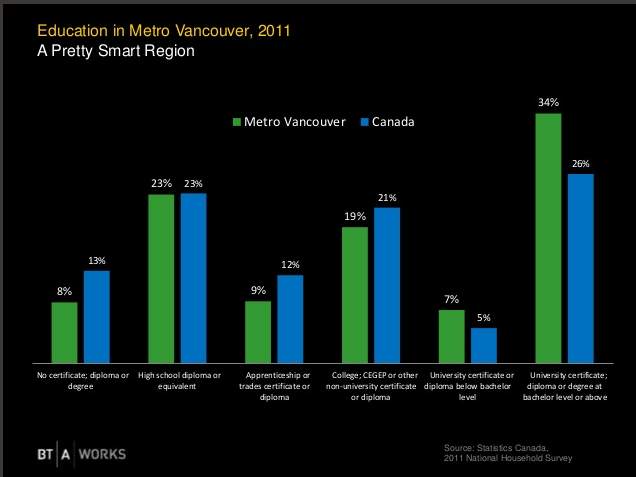 Metro Vancouver residents have a relatively high level of education compared to the rest of the country. Andy Yan/Bing Thom Architects.

That doesn’t mean companies are profiting from paying people less, because just like residents, businesses pay a high cost to operate in Vancouver, Finlayson said. Land costs are around the same level as in New York or Hong Kong – but unlike those cities, Vancouver doesn’t come close to being a first-tier business city.

“It’s the main commercial centre for B.C. and home to Canada’s largest port and that’s about it,” Finlayson said.

While Metro Vancouver has benefited from people coming from abroad and other parts of Canada, Finlayson warned that the income and cost of living disparity could deter people from moving here. He noted that while B.C. has historically attracted more immigrants than Alberta, that trend has recently begun to reverse.

Yan thinks the rising cost of land and low incomes are a potent combination that could cause problems down the road.

“It becomes about the cost of starting up a company or the cost of really trying to develop the next big idea, compared to other jurisdictions, whether they’re in other parts of Canada or the U.S.”

Finlayson would like politicians across the region to focus on what they can do to encourage more business activity, including being more open to industrial and resource sectors. Many of the largest companies headquartered in Vancouver are mining companies, he said.

For Yan, education is key. It’s important that B.C. continues to invest in the province’s public education system, he said, so that young people have the skills needed to take advantage of future economic opportunities.

While the city’s economy was once dominated by resource industries, growing and tending “human capital” might be Vancouver’s best bet for the future.

“The new economy industries, that’s what they want, their sole resource is the talent of their employees,” Barnes said. “If there’s a way of tapping into that talent, that would signal success.”