An inconspicuous 10,000-square-foot warehouse in lower Mount Pleasant might seem like an improbable start for a career in real estate, but when Tobi Reyes made the decision in 2003 – along with a group of friends – it set him on the path to becoming a rising star in the city’s development industry. 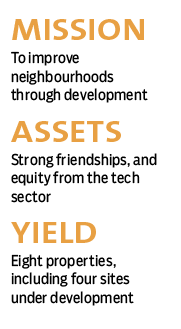 An inconspicuous 10,000-square-foot warehouse in lower Mount Pleasant might seem like an improbable start for a career in real estate, but when Tobi Reyes made the decision in 2003 – along with a group of friends – it set him on the path to becoming a rising star in the city’s development industry.

The decision wasn’t made lightly, or easily.

Reyes had spent the previous year considering the opportunities before him. He had recouped some equity when investors from Singapore acquired control of Impact Internet, a dial-up Internet Service Provider in the Philippines (now Impact Digital Media Group) in late 2000. It was one of a handful of tech projects he’d set up under the aegis of Image Tank Designs Inc. following his graduation from Queen’s University in 1996, but the dot-com bust was forcing a rethink of his ambitions.

His father’s death in 2001 prompted him to examine his personal priorities.

Reyes was 27 at the time; when the opportunity came to buy the warehouse, the idea of regular cash flow was attractive. He also knew that there was plenty of growth ahead for Vancouver.

A fraction of the size of Manila and concentrated on a downtown peninsula beginning to burst at the seams, Vancouver – as city planner Larry Beasley and condo marketer Bob Rennie told development industry audiences in 2003 as plans for Reyes’ purchase were finalized – had nowhere to grow but east.

Today, that vision is being played out, and Reyes finds himself playing a role in its fulfilment.

Port Capital Development Inc., which Reyes owns and leads as CEO, will soon complete South Creek Landing, a mixed-use development at the south foot of the Cambie Street Bridge overlooking False Creek. It is also about to start construction on residential projects at 150 East Cordova Street and on Broadway at Carolina Street. Presales are about to start for a third project at 225 Kingsway. An additional four properties with development potential are being held for cash flow.

Sitting at a table in the front window of the former retail showroom on West 2nd Avenue that serves as Port’s headquarters, Reyes explains that his company’s projects reflect a personal grasp of the city’s potential.

South Creek Landing, for example, was an opportunity to step beyond the warehouses on the east side of Cambie that Port had developed as the anchor of its portfolio. Steering the development through city processes, Port brought an office-residential tower to market that made efficient use of an irregularly shaped site.

Meanwhile, at 150 East Cordova, Port donated a gate that formerly secured its own parking area to the adjacent Salvation Army property.

“We’ve found different ways to work with our communities, and our neighbours,” he said.

The approach is sincere, yet how did Reyes make the transition from tech to real estate, becoming a rising player in one of the country’s most competitive markets?

Certainly, the tech sector was trial by fire for Reyes, who admits that he wasn’t sure whether to start another company or work for someone else in the aftermath.

“I thought of real estate as a defensive action, not for a career, not for a business. It was something to place the money in and see what happens,” he said.

And what happened is something he can only attribute to luck.

“We’ve been lucky in getting amazingly well-located properties, but each acquisition has been a fight,” he said. “It takes access to land, access to financing and then access to the right people to turn that opportunity into something that is viable.”

Born in Manila in the spring of 1974, Reyes moved to Vancouver with his parents in 1979. The family lived downtown, but Reyes was sent to St. Augustine’s School in Kitsilano, then St. George’s School, meeting friends who remain close. Summer visits to the Philippines and at Christmas gave Reyes an international perspective on Vancouver, which he considers home.

Although he studied psychology at Queen’s, Reyes also developed an appreciation for art and design that reflects a multidisciplinary attitude. The work of Impressionist painter Claude Monet, pop artist Andy Warhol and architect Norman Foster command his respect.

Sustainability also attracted him, and he joined with University of British Columbia professor Bill Rees to establish the One Earth Initiative, a sustainability advocacy group. With other members of Vancouver’s Filipino community he supported the formation of the not-for-profit Lifeline Society, with the goal of increasing the number of Asian donors in Canada’s Unrelated Bone Marrow Donor Registry.

“Tobi’s very good at networking and has a good eye for locations, which is very important in real estate,” said George Hungerford, a partner in Vancouver-based Hungerford Properties who met Reyes through his sons when they were students at St. George’s. “He’s very good at staying in touch with a broad spectrum of people that he looks to for input and support.”

Reyes himself credits counsel from Hungerford, as well as the support of Westbridge Capital Group and Fasken Martineau DuMoulin LLP partner Robert Quon, with enabling his achievements.

“I’ve worked with some great partners, and … a real estate industry that’s quite advanced in Vancouver, that allows people to grow,” he said.

But long-time friends are also among Reyes’ top professional connections. Of the seven staff at Port, about half have known each other for 20 to 30 years; similarly, investors include people from Queen’s and St. George’s.

The depth of those ties reflects advice Reyes carries from his grandfather, himself an entrepreneur.

“My grandfather has been strong about keeping a good name. That’s something he continually talks to us about. One way or another, that’s something I’ve wanted to be consistent with as well,” he said. “It’s not about money, it’s about respect and contribution – those social aspects.” •