Seventy-nine of Canada’s top 500 companies are headquartered in Vancouver, and the city has led Canada in increasing its head-office count over the past decade.

Yet Canada’s Asian Gateway continues to play third fiddle in the head office chorus behind the financial and resource hubs of Toronto and Calgary.

Vancouver has 95 corporate headquarters – the offices where strategic decision makers and company records are held – compared with 132 in Calgary and 254 in Toronto, according to the Financial Post’s FP500 2014, which lists the top 500 Canadian companies and where they’re located. 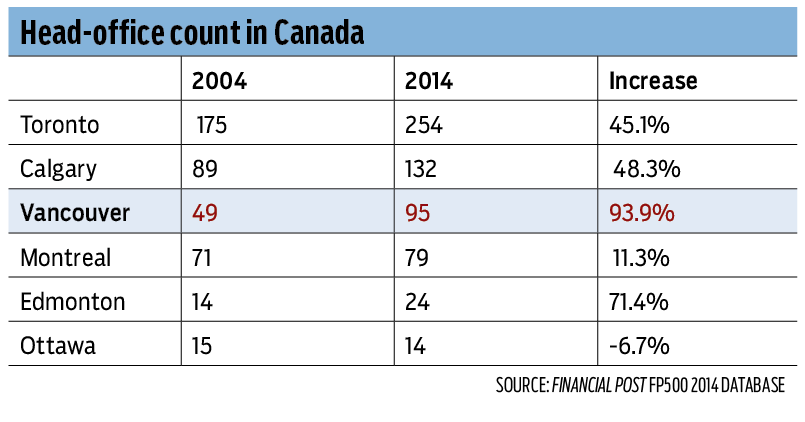 The annual ranking found that Toronto had posted a 45.1% increase in head offices in the past 10 years and Calgary saw a 48.3% increase, but Vancouver experienced a 93.9% rise in the number of corporate headquarters.

But Vancouver’s rising head-office count illustrates that quantity is not the same as size.

As a comparison, three of the top 10 companies by revenue are headquartered in Calgary, led by No. 1-ranked Suncor Energy Inc. with $39.7 billion.

Toronto also has three of the top 10 company head offices, with Royal Bank of Canada, ranked No. 2 in the FP 500, followed by Toronto Dominion Bank and George Weston Ltd., which posted 2013 revenue of $33.5 billion.

But Vancouver’s impressive trajectory in attracting head offices could be a trend, according to Jerry Sheppard, associate professor of strategic management at Simon Fraser University’s Beedie School of Business.

“Companies go where the resources are,” Sheppard said.

In Vancouver, he said that relates to intellectual capital, technological knowhow and access to the expanding Asian economy.

The relocation of the head office of Sony Pictures Imageworks from California to Vancouver is an example of the former. The movie special effects company will be headquartered next year in a 74,000-square-foot space in Pacific Centre, employing 700 people.

HSBC Canada, the country’s seventh largest bank, is headquartered in Vancouver, largely because of its access to China, where HSBC was born.

Sheppard believes that Vancouver’s location, climate and beauty can’t be discounted when it comes to attracting corporate headquarters.

“If you are working to attract an educated workforce, and doing business in the Pacific Rim,” Sheppard said, “Vancouver has some pretty good selling points.” •