By Gordon Hamilton | November 18, 2014
Lumber stacked and ready for manufacturing use. The U.S. has been complaining since 1982 that Canadian lumber is subsidized through government forest policies | Photo: Mironov, Shutterstock

With less than a year to go until the Canada-U.S. Softwood Lumber Agreement expires, lines are being drawn on both sides of the border over the future of lumber trade between the two countries.

Canadian producers say they want to extend the agreement, which has brought an uneasy peace to the decades-long lumber war since it was signed in 2006, but their U.S. counterparts say they won’t sign on again.

The U.S. Lumber Coalition, a lobby group representing American lumber companies and timber owners, said last week it’s not going to renew the agreement when it expires next October. It has expressed its anti-deal position to the U.S. government but it has yet to say publicly what it intends to do.

“What should be changed in the agreement? We are not in a position to talk about it at this point,” said Zoltan van Heyningen, executive director of the U.S. Lumber Coalition. “We are not in favour of extending the current agreement because as it is currently structured, we see problems moving forward.”

One of the principal beefs of U.S. producers is that they claim costs – particularly timber costs – have shifted since the agreement was signed yet they haven’t seen that show up in B.C. lumber costs. The U.S. has been complaining since 1982 that Canadian lumber is subsidized through government forest policies. It has filed four trade actions against Canada since then.

Canadian companies say they want to live with the agreement, as flawed as it is, because it has brought peace to an otherwise explosive trade relationship. 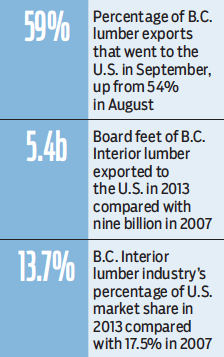 “The B.C. forest industry fully supports Canada’s position that the Softwood Lumber Agreement should be renewed ‘as is,’” said James Gorman, president of the BC Lumber Trade Council. “The fact is that the agreement has worked: managed trade has benefited both countries and has provided mechanisms whereby disputes can be resolved.”

He said it’s still too early to gauge the strength of support the American industry has in the new U.S. Congress, but that Canadian producers – particularly those in B.C. – who expect the agreement to be renewed, should not be complacent.

Feldman noted that with less than a year to go before the agreement expires, the Canadian and U.S. governments will not have enough time to draw up a new one, and the legality of a one-year standstill on trade litigation in the existing agreement could easily be challenged.

The 2006 agreement ended a bitter trade dispute where the U.S. collected $5 billion in duties but returned only $4 billion, despite rulings that favoured Canada. It expires on October 15, 2015. The dispute provided a major impetus for developing the Chinese market for B.C. lumber, but after eight years of growth, B.C.’s dominance in China is being threatened by Russian imports. Volumes are declining.

Meanwhile reliance on the U.S. market is increasing. About 59% of B.C. lumber exports went to the U.S. in September, up from 54% the month before, according to a report by RBC Capital Markets analyst Paul Quinn.

Despite paying an export tax on lumber shipments when prices are low, Canadian producers have benefited from the agreement through the stability it brought to the trade issue. They knew what the tax was and could plan shipments accordingly.