Down Under firms dig for B.C. coal opportunities

By Nelson Bennett | November 25, 2014
Australian junior mining companies are betting that long-term demand for coal used in steelmaking will make their investment in B.C. projects pay off | kilukilu/Shutterstock

Despite a global glut of metallurgical or “met” coal that has shuttered mines in B.C., Australian junior mining and exploration companies have been moving into the province with plans for new mines – underscoring the view of industry analysts that the long-term demand for steelmaking coal is strong, particularly for B.C.’s high-grade coal.

Jameson Resources Ltd. (ASX:JAL) is among the handful of Australian junior miners that have recently been buying up claims in B.C.’s coal-rich Peace River and Crowsnest regions.

With a capital expenditure that Cannacord Genuity estimates at US$123 million to US$339 million, Jameson Resources’ Crown Mountain coal mine would produce an estimated 3.7 million tonnes per year over 16 years.

Although Jameson is headquartered in Perth, its chairman is David Fawcett, a B.C. mining engineer with an extensive history in B.C.

Meanwhile, Atrum Coal NL (ASX:ATU) is planning a new anthracite mine northeast of Stewart, and Riversdale Resources last year acquired the Crowsnest Pass Complex just across the border in Alberta.

Riversdale is best known in the industry for developing a coal play in Mozambique that Rio Tinto PLC (NYSE:RIO) acquired, only to take a US$3 billion bath when it walked away from the project due to problems with rail and port transportation.

Although Mozambique has high-quality coal, the country suffers from a lack of infrastructure, said Joe Aldina, an analyst for Wood Mackenzie. And that may explain why western Canadian met coal plays are viewed as more promising.

“Canada looks like a safe bet compared to other places,” Aldina said. “There are only a handful of places around the world that have good quality met coals, and one of them is Canada.

“Even as mining companies pull back their capex budgets, given the weak met coal markets, there continues to be interest in Canada. It has low country risk, from a regulatory perspective, it has good quality coking coals, it has reliable rail and port infrastructure and it offers some diversity for global met coal buyers. Particularly for Asia-Pacific buyers, it offers them an alternative to Australian coals.” 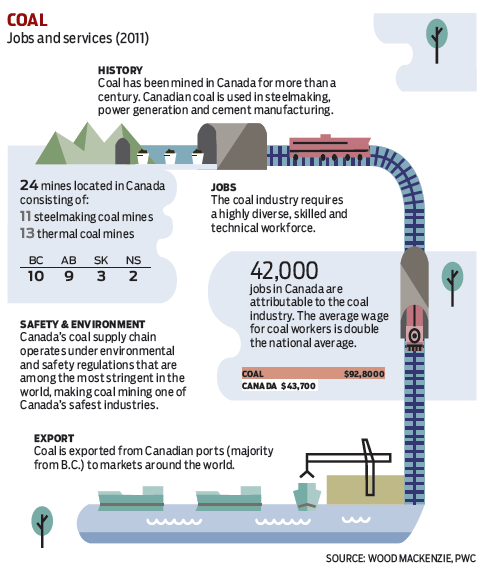 The current coal glut and low prices have a lot to do with Australia. In 2011, severe weather forced Australia’s metallurgical coal mines to shut down. When they came back into production, a low Australian dollar aided in flooding the market with cheap coal.

Prices have fallen from US$300 per tonne to US$120 per tonne and remain flat, despite curtailments, including the closure of four coal mines in B.C.

The long-term demand for metallurgical coal, used to make steel, remains strong, although analysts like Aldina believe a price recovery is still three years away.

By 2018, prices are expected to have inched back up to $160 per tonne. Mines like Jameson Resources’ Crown Mountain could be in production by then.

“There will be a lot of competition from other Canadian coking coal project developers and idled mines, however, who are also waiting for an uptick in prices,” Aldina added.

Even Teck, which has copper and zinc assets, has been hit hard by the low coal prices and general mining stock downdraft, losing almost 40% of its stock value since January.