Managing hyper-growth in a company is about more than money

Teamwork, timing and temperance are among the keys to building success

If Italy's wine and pasta don’t make you salivate, then its pizza probably will. It did for Justin Lussier, CEO and co-founder of Famoso Neapolitan Pizzeria. In fact, he got so excited about it during a 2005 tour of Naples that he decided on the spot he needed to bring the Italian thin-crust taste home to Canada.

the pizzas in 90 seconds in this oven,” he recalled. “It just seemed like a great idea to have the best pizza I’d ever tasted cooked in a minute and a half.”

He called his friends from a pay phone outside the restaurant and told them they were going to start a pizza company. Within a year and a half, Lussier and his partners, Christian Bullock and Jason Allard, opened their first restaurant in Edmonton.

A year and a half later, they opened their first franchise, and then, in the following three years, five more. By the fifth year, they had 16 locations in Alberta, B.C. and Ontario. Today they run 25 restaurants.

“The challenge is being excellent in all your restaurants, and being able to grow at the same time,” said Lussier. “Growth takes a ton of time and resources.”

Having three founder employees allowed them to simultaneously focus on different areas. For the first few restaurants, Lussier and Allard concentrated on operations, while Bullock was free to do marketing and franchising.

For Bill Moffatt, president and COO of Peoples Trust Co., a federally regulated trust company with offices across the country and assets of $6.4 billion, timing is also critical. 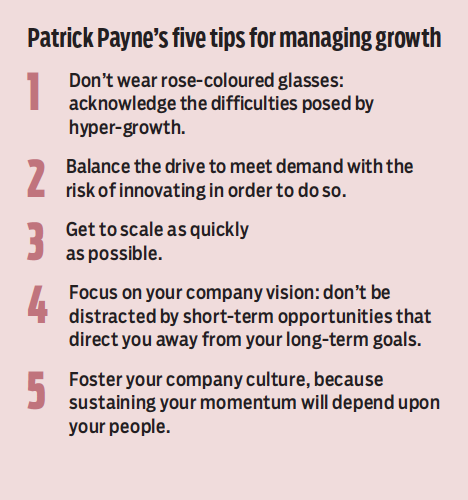 “The low interest rate environment has proven very opportunistic for our clients,” he said. “Not only are they looking at acquiring other properties, they are also refinancing and taking equity out of property they already own in order to facilitate those acquisitions.”

Moffatt said that’s all because of timing. The company was financially well positioned coming out of the 2008-09 housing slump. That enabled it to start lending at a time when other banks were not.

“A lot of those products were five-year terms, which meant that they were coming up for renewal in 2014.”

That has translated into a large volume of renewal business this past year, in addition to what was generated by the attractive interest rates.

“It’s led to record levels of lending for us.”

Because Peoples is a small company, it can also move quickly for its clients.

“Our size gives us some advantages,” Moffatt said. “We don’t have a lot of bureaucracy, so we’re not sending loan files to Toronto for approval, and we’re able to respond to client needs very quickly.”

Patrick Payne, CEO of QuickMobile and the creator of five startups, also knows about growth. His most recent company was No. 1 on Deloitte’s Canadian Fast 50 list, and No. 1 on the Profit 500 list. QuickMobile also works with more than 40 of the country’s Fortune 100.

“Growth can be very challenging,” said Payne. “It is critical to remain motivated and positive in order to stay on top of it. Push the envelope of what’s possible and don’t get mired down in the struggles.”

He believes the key to successfully managing growth is balance – balance between meeting demand and retaining quality, between innovating and mitigating risk. That all depends, he said, on understanding your market and remaining sensitive to it.

“Don’t get too far ahead of yourself,” he warned. “Anticipate the problems you will encounter, and create a solution before you get there.” ß