Growing up in Belleville, Ontario, Carla Guerrera spent her first nine years living in a farmhouse on the outskirts of town, far from friends, parks and stores...

Growing up in Belleville, Ontario, Carla Guerrera spent her first nine years living in a farmhouse on the outskirts of town, far from friends, parks and stores – the antithesis of a pedestrian-friendly community.

But then she moved into town with her family, and her eyes were opened to what a community could be.

“When we moved into the city, I really noticed, ‘Wow, this is great, I can ride my bike to the park, I have friends, we can walk to the store,’” she said. “I really noticed a shift in how happy I was, and in my quality of life, by living in a walkable neighbourhood versus an unwalkable one.” 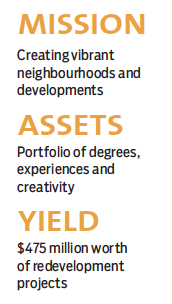 “Development, as you know, is full of tangles and knots that need to be untangled,” she said. “What I’ve learned in all of my work to date is that when you run across those complexities or those constraints, you can actually find the project’s most creative opportunity.”

The attitude – and the success it’s wrought – played no small part in her recent recognition by the Urban Land Institute as one of the world’s top 40 under-40 land use professionals.

Today, Guerrera is putting her expertise and vision to work cultivating an interdisciplinary team in the Vancouver office of Edmonton-based engineering firm Stantec Inc. that’s capable of bringing an integrated approach to the planning and execution of projects across B.C.

The team marks a shift in a sector where specific teams of professionals typically handle each aspect of a project. While integrated development processes such as design-build exist, achieving a collaborative approach remains a challenging endeavour.

Stantec has gradually been transforming its corporate structure in this direction, hiring Guerrera in 2012 with a specific mandate to shape a new interdisciplinary team that aims to have 50 members by 2020.

There are 11 members today, including planners, landscape architects, architects, engineers, environmental specialists and development professionals such as Guerrera.

Clients are landowners, ranging from developers to municipalities and institutions, such as Thompson Rivers University.

“The plan that we’ve done for them has allowed them to have a plan that helps with their future growth and expansion needs,” Guerrera explained, likening the plan to what UBC Properties Trust and SFU Community Trust have developed.

“[We’ve] done a development strategy so that they can leverage their land assets to create revenues from market, commercial and residential development that can then get reinvested back into the university.”

Guerrera’s aptitude for such projects stems from watching her father, a hairdresser, wrestle with similar challenges on two properties he owned in Belleville.

“From a very young age, I saw him go through the struggles and teach himself how to develop land and hire professionals and go through the approvals process, and I saw how complex and difficult that was. And I think I was really inspired by his tenacity,” she recalled. “Now that’s my favourite part of what I do; I love untangling the complexities of land development and bringing creativity to those struggles.”

The challenges also feed her desire to be creative.

But she quit after a year, repelled by the analytical approach that initially drew her to the profession.

“I really missed being able to use my creativity,” she said. “It was during my time in law school that I discovered the field of urban planning and decided that it was the perfect fit for me, because it … [brings] this multidisciplinary lens to real, concrete urban problems.”

Between law school and a master’s degree in urban planning at Queen’s University, Guerrera lived in Siena and Bologna, Italy, and Grenoble, France. She would study or work four days a week and travel three days, absorbing the milieu of each locale. During her graduate studies, she served internships with the Southeastern Ontario District Health Council and the Cataraqui Region Conservation Authority.

Graduating in 2003, she joined Canada Mortgage and Housing Corp. as a senior research analyst before joining Waterfront Toronto in 2007.

Respected urban planner Ken Greenberg was advising on the Lower Don Lands while Guerrera tackled the West Don Lands. He said “the enthusiasm, the drive, the inventiveness” she displayed shone.

“I was very impressed with her work, and the entire team,” he said.

Guerrera counts Greenberg among the significant influences on her career, alongside UBC professor Larry Frank and landscape architect Greg Smallenberg.

Prior to joining Stantec, Guerrera oversaw a portfolio of decommissioned service stations for Wesgroup Properties LP, seeing one in North Vancouver through to redevelopment as the Prescott – a mixed-use project with 84 condos and the headquarters of BlueShore Financial.

Guerrera’s breadth of experience and social aptitude – when not working, she loves being social and cooking for friends – have served her well.

“The more diverse experiences and skills that you have to untangle these problems and complexities really allow creativity and the best solutions and outcomes,” she said.

And, just as she loves vibrancy in her social circle, she seeks to develop it in projects.

“Creating walkable places, bringing density and vibrancy into underutilized sites that exist in neighbourhoods, and adding those quality-of-life factors … that all contributes to our health and well-being,” she said. “I really solidly believe that. And that influences my work, 100%.” •