Vancouver has about one-tenth the traffic fatalities as an automobile-dependent city like Houston, Texas

By Jen St. Denis | December 19, 2014, 11:33am
Vancouver has about one-tenth the traffic fatalities as an automobile-dependent city like Houston, Texas

If you want to reduce your risk of dying in a car accident, then you should live in a city with lots of public transit and high transit ridership.

That’s the conclusion of Todd Litman, an urban planner who specializes in transit and is the executive director of the Victoria Transport Policy Institute. He recently published his findings on transit and safety in the Journal of Public Transportation.

“Vancouver has a much lower fatality rate than most North American cities, and you could essentially say it’s because Vancouver has committed to multi-modal transportation and smart-growth development patterns,” Litman said, referring to planning decisions to boost the number of pedestrian, bike and transit trips and build higher-density residential buildings near transit.

“Vancouver has about a tenth of the traffic fatality rate as in automobile dependent cities.”

Litman argues that public transit has an undeserved reputation for being unsafe, caused in part by intense media coverage of bus or train crashes, which are relatively rare, and “conventional traffic safety messages that emphasize danger rather than safety.”

Various studies have shown that even a slight increase in public transit use results in fewer traffic fatalities, Litman said. Data also shows that, contrary to the perception that transit stations attract or encourage crime, crime rates actually fall in cities with increased transit and transit-oriented development. 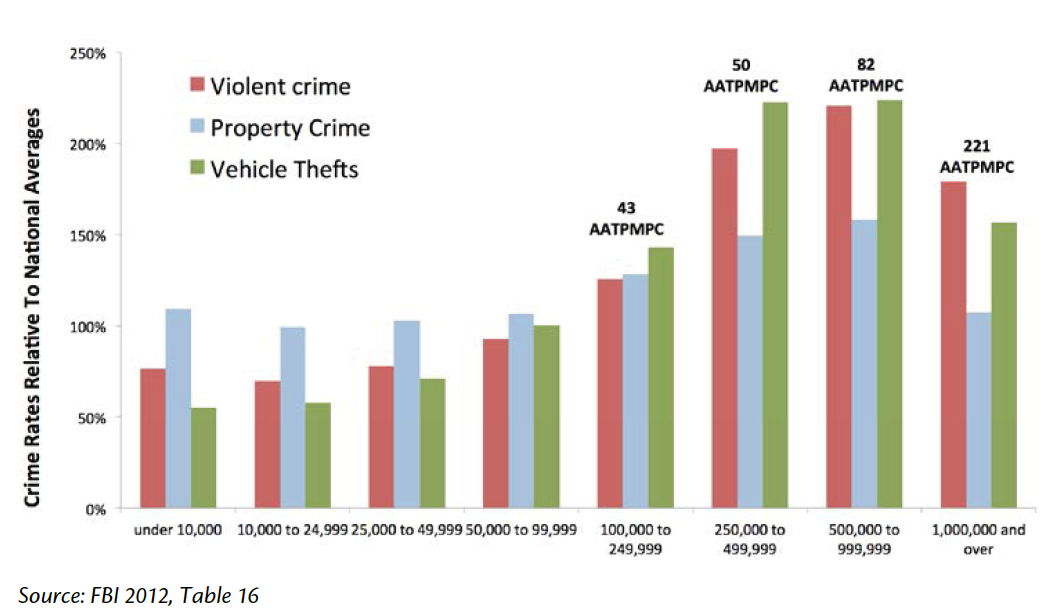 Crime tends to rise the larger a city is. But crime has fallen in the largest cities, which also have high transit ridership. Source: A New Transit Safety Narrative by Todd Litman. ( Transit Passenger, Miles Per Capita)

Based on those findings, Litman thinks that transit authorities should emphasize the safety benefits of choosing to take the bus or train as a way to increase ridership.

On December 18, TransLink reported that ridership dropped 1% in 2014 compared to 2013. TransLink’s theory that a fare hike in 2013 may have caused the drop is plausible, Litman said. The consequences of fare increases are often spread over a long period of time.

After several funding proposals did not go ahead in 2012, TransLink raised fares and reduced service. Greg Moore, mayor of Port Coquitlam, said he believes fewer buses are the cause of declining ridership.

“As a bus rider I can tell you that when service decreases in some areas to once an hour, I’m less likely to take it in the evenings,” he said. “When you get on SkyTrain or WestCoast Express and it’s standing room only, it’s not as convenient to take it.”

Starting in March, Metro Vancouver residents will vote in a referendum on whether the PST should be raised 0.5% to pay for transit improvements.