Daniel Fournier, tall and fit at 60, welcomes a reporter into his seventh floor suite at the Fairmont Hotel Vancouver and fields the first question with a characteristic smile.

Two days later it proves another accurate assessment for the chairman and CEO of Ivanhoé Cambridge, the real estate arm of Caisse de dépôt et placement du Québec and one of Canada’s largest property firms with more than $40 billion in worldwide assets – including Metro Vancouver’s biggest shopping centres, largest office complex and the Hotel Vancouver.

“Vancouver is our second-biggest investment city in the world,” Fournier said. “And it represents a template of our global strategy.” 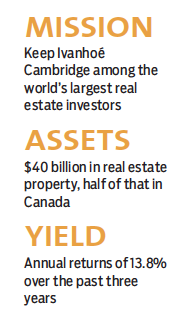 While completing his history degree at Princeton University, he won a Rhodes scholarship to Oxford University, which, he said, was a humbling experience.

Fournier was accepted to Oxford just as the Canadian Football League drafted him as a first-round pick. Perhaps a harbinger of the negotiation skills that would help Ivanhoé Cambridge expand its global reach, the former captain of the Princeton football team received permission to skip a term to play professionally.

“My law professor was spectacularly unimpressed,” Fournier said. “He asked me, ‘Exactly who or what are the Ottawa Roughriders?’”

After one football season in Ottawa, Fournier returned to Oxford.

But, he said, “I would have liked to have played two or three years to see how far I could have gone with football.”

Back in Montreal at age 25, Fournier instead began quarterbacking a spectacular real estate career. He helped form Equidev, which went on to acquire the Ogilvy department store and Montreal’s Ritz-Carlton hotel among an impressive string of acquisitions.

In 2008, he was recruited as CFO for Société immobilière Trans-Québec (SITQ), a Caisse real estate subsidiary, at the height of the financial crisis. After a short hiatus, Fournier returned to Caisse to head its entire real estate division.

One of his first actions was to merge SITQ and Ivanhoé Cambridge into a single unit and begin building it into a worldwide powerhouse. At that time, the companies had approximately $1 billion in assets. Today, Ivanhoé Cambridge is one of the world’s 10 largest real estate investors. Its Lower Mainland holdings alone include the Fairmont Hotel Vancouver, Metropolis at Metrotown in Burnaby, Guildford Town Centre in Surrey, Oakridge Centre in Vancouver and Delta’s Tsawwassen Mills retail complex, which will be B.C.’s second-largest shopping centre, behind Metrotown, when it opens in 2016.

The company has posted 13.5% returns annually for the past three years, and some of its shopping centres have doubled in value.

Fournier’s strategy for Ivanhoé Cambridge is to be the dominant player, create the critical mass, in each market it is involved with.

To that end, Ivanhoé Cambridge has jettisoned 27 smaller shopping malls and sold 90% of its hotel properties over the past few years to concentrate on big-asset retail, office and multi-residential properties in just 15 major cities around the world.

At a Vancouver Board of Trade speech later in the day, Fournier said the aim is to increase Ivanhoé Cambridge assets to $60 billion within the next four years. But he injected a cautionary note.

“Our yields have been spectacular in the past few years, but you cannot expect that level of return to continue forever.”

“We are dealing with people’s pensions. That is important. You have to stay paranoid. You can never be satisfied.”

He said the top future yields might not come from Canada. Fournier has led an aggressive expansion in the United States, where the company concentrates on New York, Chicago, San Francisco, Boston, Washington, Denver and Seattle, where it recently bought three large office buildings. It has also invested in 26 shopping centres in Brazil and is looking at Mexico, which Fournier calls “likely the next Brazil.”

A day after the BIV interview, he flew to Shanghai, China, where Ivanhoé Cambridge has already bought into joint-venture property portfolios and is looking for more.

Fournier credits his drive to his mother, Lorraine, who, at 88, remains active. His philosophy appears simple.

“Take advantage of the opportunities you are given and make a difference. Leave some tracks,” he said.

Once active in politics – in 2006 he ran unsuccessfully as a federal Progressive Conservative candidate in the Liberal stronghold of Outremont – he also remains involved in various charities, but Fournier believes he can give back the most from his current position supporting Canada’s second-largest pension fund.

“I want to make Ivanhoé Cambridge the best company it can be and help raise Caisse to where I believe it should be. And right now that is taking everything I’ve got.” •