Local governments in Metro Vancouver could find the money to fund transit and road improvements not through a 0.5% sales tax, but through “earmarking” future revenue growth and setting 0.5% of that revenue aside for transit.

That’s the Canadian Taxpayers Federation’s alternative plan to fund transit improvements in Metro Vancouver. The CTF is leading the no campaign for an upcoming referendum which will ask voters to vote yes or no to a 0.5% regional sales tax, or “congestion improvement tax.”

The CTF also unveiled a revamped website, notranslinktax.ca , which argues TransLink is a wasteful agency that pays its executives too much.

The proposed tax would partially fund a $7.5 billion transit plan that includes more bus service, a subway along part of Broadway in Vancouver and a three-line light rail system for Surrey.

Gordon Price, director of Simon Fraser University’s city program and a former Vancouver city councillor, warned the CTF’s plan would amount to either an increase in property taxes or cuts in public services.

“The key point, I would argue, is that is the (CTF’s) agenda. The intent of this rant is waste in TransLink … as part of an agenda to defund government,” Price said, referring to the no side’s new website (pictured above). “That is the purpose of these organizations. That is their Astroturf function.

“The most effective strategy that’s emerged from the 70s and 80s is that you must get the middle class to vote against its self-interest.”

Setting aside 0.5% of that expected growth would add up to enough money to fund the local government’s portion of the $7.5 billion transit plan, said Jordan Bateman, B.C. director for the CTF. (Regional mayors expect the provincial and federal government to also fund a share of the plan). 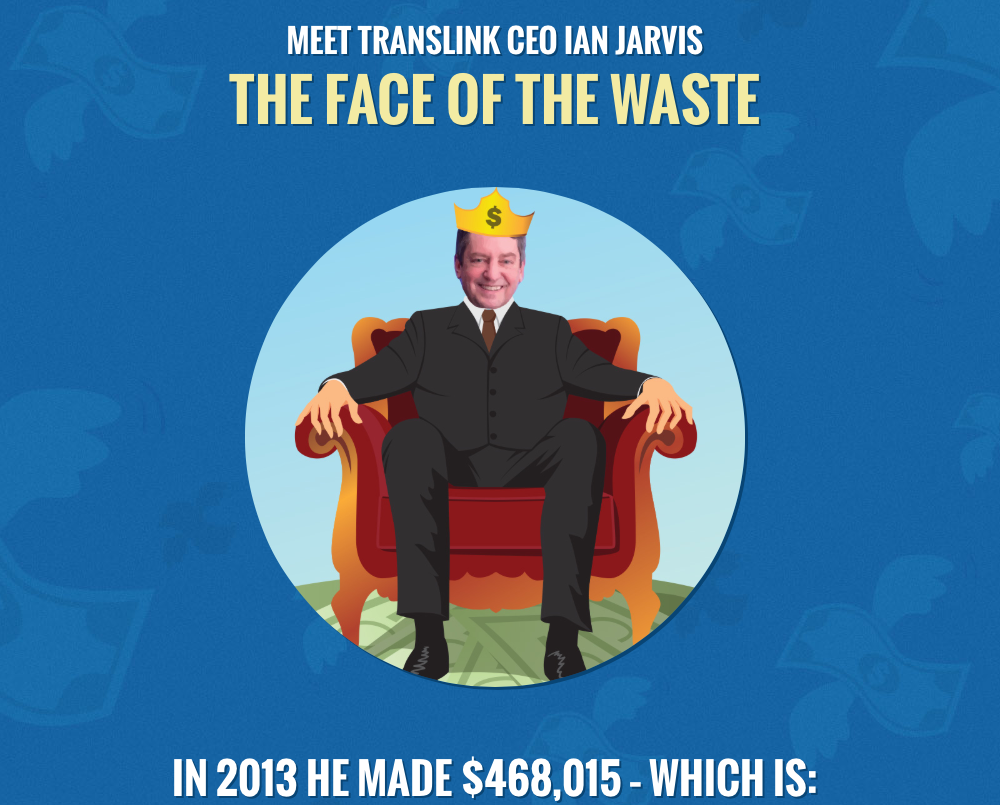 That revenue growth is expected to come from the one million new people expected to move to the region — and pay taxes here — by 2030, Bateman said. That expected population growth is why a solution needs to be found to fund transit, the yes side is arguing, especially since new sources of transit funding have been stalled for several years, leading to service cuts and fare hikes.

“This is future growth. This isn’t existing [money], this is growth that’s coming down over the next 10 years,” Bateman said. “Would they have to make priorities? Absolutely.”

As to whether those one million additional people would also need more municipal services, Bateman responded that the mayors would still have 4.3% annual growth to spend.

Bill Tieleman, an organizer for the yes side’s Better Transit and Transportation Coalition, said there was a major flaw in that argument.

“Every single municipal service has to expand when you expect a million more people by 2030,” Tieleman said.