The human brain is sometimes likened to a city – a similarly dynamic entity whose internal functions and interactions are immensely complex and whose outcomes are often staggeringly difficult to predict.

It seems only fitting then that renowned neuroscientist Ryan D’Arcy would be behind Surrey’s Innovation Boulevard, a kind of city of research inhabited by a population of gifted minds working toward a common goal at one of Canada’s most ambitious health-care technology projects.

The hub was founded in 2012 with the aim of bringing together schools, private business and government in close proximity between Simon Fraser University (SFU) and Surrey Memorial Hospital, to facilitate advances in health-care research.

Born in Williams Lake, the 42-year-old D’Arcy’s curiosity about the inner workings of things started from a young age. One of his earliest memories was taking his toys apart – “I was rarely successful in getting them back together,” he said – and, as a youngster, he preferred the outdoors and time in the mountains skiing to the classroom, although he did show signs of academic promise.

Heading into Grade 10, D’Arcy faced a decision. He’d been offered two choices: a chance to attend a school that trained competitive ski racers, or a prestigious university-preparatory school, Vancouver Island’s Brentwood College School. D’Arcy chose the latter, and called it a “big fork in the road.” But he hasn’t forgotten his roots.

“I’m very proud to be from Williams Lake. I grew up in a cowboy town, and that was a great experience.”

At Brentwood, he was greatly influenced by his biology and physics teachers, who nurtured his love for science. After he graduated from high school in 1990, D’Arcy headed off to the University of Victoria (UVic), earning his bachelor of science. It was at UVic where the brain became his area of expertise. He then headed east to Dalhousie University in Halifax to complete his master of science and PhD degrees in neuroscience, with a specific focus on clinical neuroimaging. 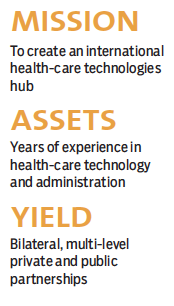 “Around the time I was finishing my PhD in Halifax, I was being actively recruited for a number of different options. But I had the opportunity to go to the National Research Council in Winnipeg at the Institute for Biodiagnostics.”

In Winnipeg he got the chance to work under Ian Smith, who founded the institute in 1992 and was its first director. “He was a major mover and shaker,” D’Arcy said. “And they were doing big science with real world impacts there, and they had one of Canada’s best models for innovation.”

Shortly after joining the National Research Council, D’Arcy went back to Halifax to lead the launch of the Institute for Biodiagnostics Atlantic arm, an initiative to build a biomedical innovation cluster from scratch in 2002.

“I was less than 30 when I took that role,” D’Arcy said. “We had an idea and turned it into a world-leading best-practice model for neurotechnology innovation in 10 years.”

D’Arcy, who considers himself a “builder,” saw that Halifax was set up and growing, and decided he “wanted to come home and do it on home soil.”

In 2012, through partnership with the provincial B.C. Leadership Chair initiative and the Surrey Memorial Hospital Foundation, D’Arcy accepted a position as professor at Simon Fraser University’s School of Engineering Science and Computing Science as well as the head of health sciences and innovation at Surrey Memorial Hospital. Arriving in Surrey in June of that year, he wasted no time meeting with Joanne Curry, then executive director of SFU Surrey, and Donna Jones, the City of Surrey’s manager of economic development. 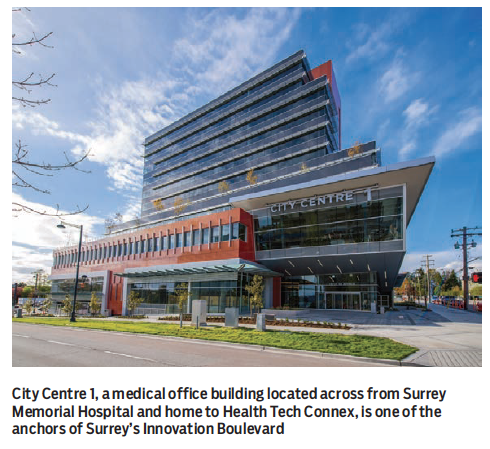 Jones was on board instantly with the idea of an innovation initiative in Surrey. Shortly after, D’Arcy met with Rowena Rizzotti, then executive director of Fraser Health’s Surrey Memorial Hospital, and the two found they were “thinking the same thing at the same time.”

The idea was to create a groundbreaking health-care technology hub growing from Surrey, a network of government, economic and educational connections all firing together to create one functioning unit.

“In a way I think cities like Metro Vancouver could be like the brain, or at least they have the capacity to function powerfully like the brain,” D’Arcy said. “The question becomes how do you make sure they do.”

A year after Jones and D’Arcy met, then-mayor Dianne Watts officially launched the initiative in her 2013 state of the city address. Now that Watts’ hand-picked successor, Linda Hepner, has assumed the mayor’s chair, it’s clear Innovation Boulevard has been given another green light and is going full steam ahead.

Though the hub is, at least geographically, a Surrey initiative, D’Arcy stresses that it needs to be seen as part of a broader effort.

“When you look at Surrey or Vancouver those are really only complex parts of a bigger structure. They’re fully interactive, and one thing that happens in one absolutely affects the other.”

Innovation Boulevard has already pulled in key Metro Vancouver players plus built international relationships with countries including Israel and India.

“We have to bring together world-class B.C. strengths and assets to keep up with the global pace of advances and growing needs for technology-based solutions in health care,” D’Arcy said.

“By partnering together and focusing it on practical wins, the Innovation Boulevard team is seeing major successes quickly.” •