B.C. economy to see Canada’s strongest growth in 2015: Conference Board

By Emma Crawford Hampel | February 23, 2015, 9:10am
Shutterstock. Graphs below: Conference Board of Canada

Uncertainty over LNG is not expected to slow down British Columbia’s economy in 2015, according to the Conference Board of Canada’s economic outlook released February 23.

Instead, expect the province to lead the country in growth for the year with a 3% economic increase this year after growing 2.8% in 2014, the board said. B.C. is also expected to see further growth of 2.7% in 2016.

“British Columbia will be among the economic growth leaders, with Manitoba and Ontario [both expected to see growth of 2.9%], over the next two years,” said Conference Board associate director, provincial outlook Marie-Christine Bernard.

“The lower Canadian dollar, the acceleration in U.S. economic growth and stronger consumer confidence will provide the foundation for these provinces to easily outpace the Canadian economic growth of less than 2% this year.”

The board said it does not expect B.C.’s housing market to slow down in 2015. As well, household after-tax incomes will see positive movement for the year due to low inflation and lower fuel tax, according to the report. Job prospects in the province will also see improvement through the year. 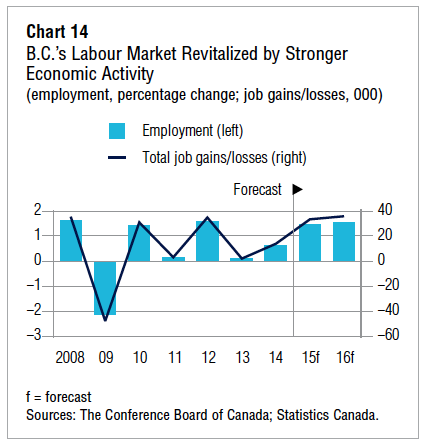 The Conference Board forecasts the price of West Texas Intermediate (WTI) crude to average around US$56 per barrel this year. This is 40% lower than the 2014 average of US$93.20, which takes into account the crash in the later part of the year.

While this will have many advantages for B.C., Alberta is expected to suffer in 2015 due to the price slump. The oil-dependent province is expected to see GDP shrinkage of 1.5% for the year after growing between 3-4% annually for several years.

“The party appears to be over in Alberta, at least over the medium term, as low oil prices send chills through the economy,” Bernard said. “Several oil-industry firms have already announced sharp reductions to their capital plans and to employment.

“In the next couple of years, a return to 4% growth is not in the cards, since oil prices will not hit triple digits any time soon under current market conditions.”

The only other province expected to see economic declines is Newfoundland. 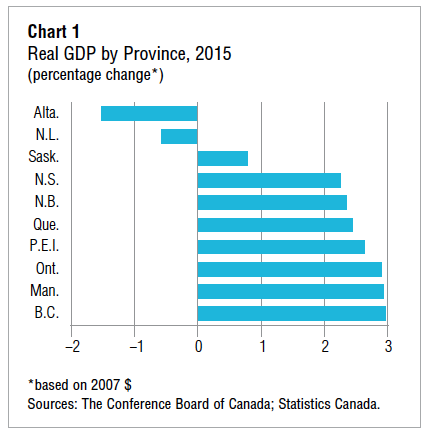 Overall, however, the board said Alberta’s economy should improve by 2016 as the oil industry recovers some momentum.

Although it is not expected to slow B.C.’s growth for the year, uncertainty about LNG in the province still remains, due in most part to lower LNG prices in Asia.

“A long-awaited decision by Petronas and its partners to move forward a $36 billion project is expected this year,” said the Conference Board in a release.

“If it proceeds, it would be a game changer for British Columbias energy sector.”