By Jen St. Denis | March 6, 2015, 3:09pm
Brewmaster Graham With at Parallel 49 brewery: making beer uses a lot of water, but brewers are working with the City of Vancouver on its water conservation initiative | Rob Kruyt

A good year for tourism coupled with Vancouver’s craft brewery boom added up to a 10% increase in the amount of water Vancouver businesses glugged in 2014.

Meanwhile, residential water use stayed flat between 2013 and 2014.

The City of Vancouver now wants businesses to slow the flow.

“A lot of the water conservation focus over the years has been on residents, and now we’re broadening our reach,” said Brian Crowe, the city’s director of water, sewers and district energy.

As part of its Greenest City plan, the city wants to reduce overall water consumption by 33% of 2006 levels. That will save taxpayer money in the long run, Crowe said.

In 20 to 30 years, population growth is expected to put pressure on the region’s reservoirs. Expanding them will be costly.

“That could be raising the dam and flooding the watershed or developing another lake and damming another river,” said city waterworks engineer Danny Wong.

“That’s at a huge cost to the taxpayer. It’s well into the hundreds of millions if not a billion dollars, depending on what option you look at.”

Brewers say they’re on board to work with the city, but they also hope city staff are aligned with Metro Vancouver as the regional district introduces new rules for brewery waste water.

Metro Vancouver is expected to introduce a brewery and distiller-specific bylaw in 2016 to require brewers to monitor waste water and remove solids before they go down the drain.

Metro Vancouver is proposing charging breweries an administration fee of $200 plus an additional levy based on the amount of solids in waste water: the more solids, the higher the fee.

But Ken Beattie, executive director of the BC Craft Brewers Guild, said the two policies could be at cross-purposes if the city and regional district aren’t working together.

“One of the ways you make sure things don’t get flushed down into the sewer system is to use more water, but the city is saying, ‘Wait, don’t use more water,’” Beattie said. “So we’ve said, ‘You guys have to get together and tell us what you want.’”

The City of Vancouver and Metro Vancouver will be working together on the issue, Crowe said.

Brewers use water in just about every step of the beer-making process, including cleaning equipment and bottles.

The amount of water used can be as much as 20 litres to one litre of beer, but Crowe said some brewers have been able to reduce that ratio to 6-1.

Graham With, brewmaster at Parallel 49 in East Vancouver, estimated that most Vancouver breweries use about seven litres to produce one litre of beer. 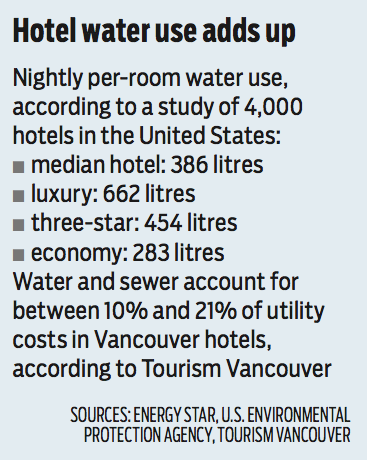 Craft brewers are often focused more on starting and growing their business than on saving water, so the city’s engineering department hopes to work with brewers to develop a set of best practices to help new brewers as they get set up.

Crowe pointed to current initiatives with hotels and restaurants, such as a program to provide restaurants with a free dish-rinsing nozzle that uses less water.

Tourism Vancouver is gathering data on water use for 2013 and 2014, but Gwendal Castellan, an energy specialist with the tourism association, said it knows that occupancy, and therefore water use, was up in 2014.

“It’s good that [businesses are] thriving, but the water’s costing them money and costing the whole city money because of the cost of growing the water system to support that demand,” he said. “We want to help them grow economically and use water more efficiently.”