By Edmond Lu | March 31, 2015
The BCTIA Innovation Hub, unveiled last December, has already brought eight startups into its accelerator program and hopes to fill the space by this fall | Photo: Tyler Orton

Three months after the launch of the BC Technology Industry Association (BCTIA) Innovation Hub, eight startup companies have already taken space in the 26,000-square-foot facility, and the organization hopes to fill it by the fall.

Last November, the federal government named four B.C. organizations as recipients of $31.4 million in funding from the Canada Accelerator and Incubator Program. Almost a third of the program’s total had gone to B.C., said Industry Minister James Moore, who made the announcement.

The BCTIA received $10.4 million of the funds, which, along with matching financial support from its industry partners, allowed the association to open its innovation hub.

The hub, which is at 887 Great Northern Way, is an extension of BCTIA’s Centre4Growth, an accelerator program in which the association helps connect developing tech companies with mentors, resources and networking opportunities. Because the BCTIA did not have a physical space, the program initially was virtual.

Bill Tam, president and CEO of the BCTIA, calls the hub “Centre4Growth on steroids.”

He said he hopes the facility, which has room for about 20 small teams, will be filled this fall. But Tam added that because the selection progress is meant to find only the “crème de la  crème” of startup companies, that timetable might change.

Similar to the Centre4Growth program, the hub is designed for B.C.’s anchor companies to connect with and help develop homegrown talent.

ACL Services, a Vancouver-based enterprise audit and risk management software company, was one of the hub’s founding partners and promises to deliver both financial support as well as the experience of its top talent for the teams at the hub to draw on. 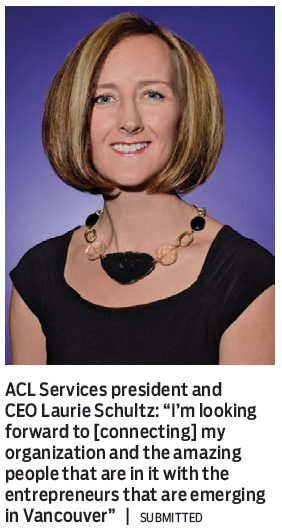 According to Laurie Schultz, ACL’s president and CEO, it was time for the 27-year-old company to start giving back and help develop more mid-sized companies in B.C.’s tech sector.

“Most of [B.C.’s industry] is in small companies. At the other extreme, there’s a couple of very large technology companies, but, frankly, there’s not enough of us who are in the middle.”

Schultz added that ACL is not participating in the program to take equity in the startups.

She said the company is still “incubating” ideas about its involvement but hopes to send someone, possibly even an executive team member, to set up office in the hub.

“Honestly, I’m looking forward to the ability to connect my organization and the amazing people that are in it with the entrepreneurs that are emerging in Vancouver.”

Tam said the BCTIA will organize with its other founding partners on their involvement with the hub in the coming weeks. •

– With files from Tyler Orton