Innovations aimed at putting oil on the waters – safely

British Columbia's pristine environment is a natural source of pride for its residents, one that’s won the province top rankings in quality-of-life surveys.

Small wonder, then, that the prospect of increased shipments of oil and gas through the province fill many with dread. Many still remember the Exxon Valdez disaster of 1989, and the fireball that engulfed the community of Lac-Mégantic, Quebec, when a runaway tanker train plowed into the town centre, killing 47 people in 2013.

Yet transportation, and specifically the transportation of oil and gas, is far less prone to accidents than it was even a few years ago.

Transportation Safety Board of Canada statistics record 250 marine shipping accidents in 2013, down 18% from the previous five-year average of 305.

Similarly, total rail accidents dropped 9.8% over the course of the previous decade – even for the Montreal, Maine & Atlantic Railway, which operated the train involved at Lac-Mégantic.

Some of the most significant improvements have been in the pipeline sector, thanks to new regulations and technology adopted in response to public concerns.

“If you simply look at history, we’ve seen a tremendous improvement in performance since the wake-up call that was the Exxon Valdez,” said Kenneth Green, a senior director with the Fraser Institute covering the energy and natural resources sectors. “We see this dramatic fall-off in oil being spilled or otherwise leaked at the same time oil transport by tanker has doubled.”

Public concern following the spill in Alaska prompted the United States to pass the Oil Pollution Act of 1990, which in turn spurred the industry to develop new technologies and equipment.

Enbridge Inc.’s proposed Northern Gateway pipeline, designed to carry bitumen from Bruderheim, Alberta, to ocean-going tankers in Kitimat, has unique considerations, but will incorporate and adapt existing equipment and technologies to ensure safety.

Safety measures developed by Enbridge Inc. include pipeline steel that is 20% thicker than required and round-the-clock leak monitoring from both remote and on-the-ground personnel for the proposed Northern Gateway pipeline project | Image: Enbridge Inc.

BC Coast Pilots (BCCP), the private company employing 105 licensed marine pilots serving the Pacific Pilotage Authority (the federal Crown corporation mandated with ensuring a safe and efficient pilotage system on the B.C. coast), was consulted regarding the project (as well as liquefied natural gas plants proposed for the coast) and sees nothing unusual.

“There is nothing new or novel about this project,” Paul Devries, general manager of BCCP, said.

“The same tug procedures that would be used up north are already used down in Vancouver harbour when we bring tankers through the Second Narrows.”

The tugs the pilots captain are not just any tugs, thanks to novel designs by Vancouver naval architect and marine engineering firm Robert Allan Ltd.

“What an escort has to be able to do is take control of a disabled tanker in an extreme situation and exercise both steering and braking controls over that tanker so, ideally, it doesn’t go aground,” explained Robert Allan, principal of the firm founded by his grandfather in 1930.

Allan’s firm set about testing various hull models at the University of British Columbia – at a lab since shuttered – and devised various forms that met the technical specifications and economic demands of tug operators. The result was RAstar, an agile tug with a form that could generate the significant forces needed to take control of distressed tankers.

“It’s got a strong outward slope on the upper portion of the hull, so when the tug leans over to exert these big corrective forces, the stability of the tug actually increases. It’s been hugely successful,” Allan said.

Since 1996, the firm has built approximately 100 of the tugs – approximately three-quarters of the global market – serving oil and LNG terminals around the world.

“His tugs are obviously part of our plans and will be some of the largest and most technologically advanced tugs operating in Canada,” said Ivan Giesbrecht, communications manager for Northern Gateway.

Meanwhile, Enbridge has committed to building pipelines to the tankers with steel that’s 20% thicker than required and advanced safety monitoring.

While the use of unmanned drones has been discussed for pipeline monitoring in the U.S., Enbridge has rejected the idea in favour of 24-hour staffing at remote pumping stations.

“Our safety plans submitted to the regulators don’t include drones,” Giesbrecht said. • 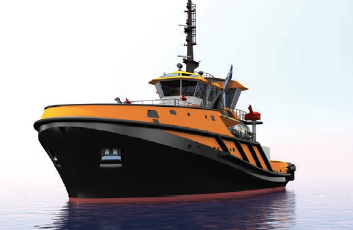 The Raincoast Guardians are designed at 50 metres long with more than 10,000 horsepower, nearly three times as powerful as conventional coastal tugs. Two such tugs would escort every laden tanker en route from terminals on the northeast B.C. coast, and empty tankers will also be escorted.

Each Raincoast Guardian tug is estimated to cost about $30 million, or nearly three times the price of a normal tugboat. The boats are also designed to perform rescue towing, should an unescorted tanker be disabled anywhere within the 320-kilometre limit of Canadian waters.