It would be easy to mistake Janice Abbott for a real estate developer. Having overseen the building of one residential complex in Strathcona in 2013, she’s finalizing financing for another project nearby, which she hopes will begin construction within weeks. Meanwhile, public consultation has just begun as part of a rezoning application for another project that she hopes to secure approval for within the next 12 to 18 months.

But unlike the typical developer, Abbott sees completion of a building not as an end but as a means to an end. A social worker who discovered a talent for real estate development late in her career, Abbott is driven by a commitment to see an end to violence against women.

Abbott’s office sits atop the New Marr, a nondescript low-rise near the infamous crossroads of East Hastings and Main Street in one of the poorest regions in Canada. The New Marr is one of 16 residences operated by Atira Women’s Resource Society catering primarily to victims of violence. The CEO’s office is bright and airy, the ash-blond flooring swept clean, the light pouring in from floor-to-ceiling windows. Stacks of paper aligned in neat piles on Abbott’s desk attest to her week’s agenda: she has a full lineup of meetings with bankers, architects and city hall planners.

Abbott, now 52, grew up in Powell River. In deference to the privacy of others, she declined to specify the motivation for her life’s work, saying only, “I came to this work through lived experience.” She attended Simon Fraser University before completing a journalism diploma at Langara College. After four years as a journalist in the Fraser Valley, she was working in public relations and serving on the board of what was then Atira Transition House Society when it advertised for an executive director. At the urging of other board members, Abbott stepped down from the board in 1992 to accept the position.

At the time, Atira operated a safe house for women and children fleeing violence; it had seven part-time staff and an annual budget of $180,000. Although she had no aspirations for anything beyond running the single residence, almost immediately upon taking the leadership role, Abbott instituted a change that would set Atira on a growth trajectory that continues to the present day.

Standard practice in women’s shelters at the time was to screen applicants for mental health and substance abuse. But Abbott felt a profound hypocrisy in passing judgment on women who needed help, and under her direction Atira became one of the first to institute a no-barriers admission policy. It remains one of the few with such a policy. Other shelters began referring women to Atira, and demand for its services grew.

At that time, the recently elected Mike Harcourt government created a Ministry of Women’s Equality, and Abbott took advantage of plentiful funding for women’s groups over the ensuing 10 years of NDP government, opening another two residences by 1997.

The pivot that would open Abbott’s eyes to the value of her experience came in 2000, when Bridge Housing Society for Women asked Atira to manage a brand-new residence it had built in the Downtown Eastside.

“A group of amazing women had spent 20 years trying to raise the money to build this first women-only housing building in the Downtown Eastside, but they had no experience operating housing,” Abbott said. 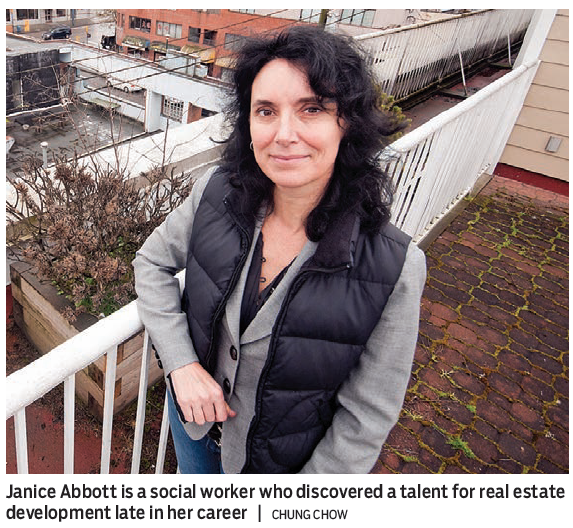 In 2001, Atira began managing the building as a subcontractor to he Bridge group. “That’s when our real growth started,” Abbott said.

At the same time, Abbott had begun attending small-business seminars and workshops, with the goal of starting a for-profit business that would expand Atira’s funding beyond fundraisers and government grants. The message she took away from the seminars – stick with what you know – was at first discouraging. “I wasn’t sure how you could make money off women living with violence,” Abbott said with a laugh.

But then it clicked: although she considers herself a social worker first, Abbott had acquired considerable expertise in building management, through operating Atira’s many residences. In 2002, Atira Property Management was born, and Abbott added another CEO title to her business card. Today, in addition to overseeing the non-profit’s women’s programs, Abbott is the public face of the property management company, spending several evenings a week pitching its services to condominium strata councils. The for-profit company manages 90 buildings and employs 280 people, many through the Open Door Group, an employment agency that provides job training for people with disabilities. •

Finding escape from the day-to-day stresses of her career would be hard enough, but Janice Abbott is married to the business in more than the usual figurative sense. Her husband, Shayne Ramsay, is CEO of BC Housing Management Commission, the Crown agency responsible for administering the province’s subsidized housing programs – and for providing the majority of Atira’s funding. The couple has taken some heat in the media for the appearance of a conflict of interest, but Ramsay recuses himself from any discussions involving Atira, and Abbott is confident there’s no conflict of interest.

When they first met socially in 2009, a passion for housing the marginalized was an obvious shared interest, but shoptalk quickly wore thin.

They soon found other shared passions, chief among them hockey. “I grew up in a hockey family,” Abbott said. “As it turns out, he happens to be a big hockey fan – Canucks, yes, but mostly the Habs – so we talk a lot about hockey.” The couple also shares an interest in music and they attend a lot of concerts.

Between meetings with bankers, architects and city hall bureaucrats, Abbott no longer has much time to spend with the women Atira serves, but that’s why she insists on maintaining an office in the Downtown Eastside.

“It’s important to stay connected to the reason I’m here,” she said. “The reason I do this work is because I think it’s possible to end violence against women. It’s a massive job. But to do this work and stay focused you’ve got to believe; otherwise why would you bother?”