To an outsider, Yifan Jian’s passion project looks like a mechanical slab sprouting wires, lenses and lasers. A computer monitor hooked up to the apparatus hints there’s something more going on than a shot-in-the-dark lab experiment.

Jian, a research scientist with Simon Fraser University’s (SFU) Biomedical Optics Research Group (BORG), describes his device as an ultrasound for the eye that uses non-invasive techniques to tell doctors what’s going on behind a patient’s gaze.

“I developed this technology [during] my PhD and now it is, I think, a good opportunity to put it toward real-world use,” he said, standing next to a window directly facing Surrey Memorial Hospital (SMH).

To speed up the commercialization process, BORG moved from SFU’s Burnaby campus at the beginning of the month and has set up operations at Surrey’s new Health Tech Innovation Hub.

It’s a key piece of Surrey city council’s efforts to build up its Innovation Boulevard project that’s connecting digital health and medical device companies to the surrounding post-secondary schools and hospital in the city centre.

“We’re engineers. We’re good at building stuff, but we want to put [BORG devices] in good hands to use them to make a difference,” Jian said. “We’re going to collaborate [and share] opportunities with Surrey Memorial Hospital, and the ophthalmologists are just one floor up.”

She said building the innovation hub in a location with easy access to clinicians, university campuses, health authority officials and entrepreneurs was necessary if the companies occupying its offices are to have any commercial success.

“The technology out there in many hubs across the country is struggling to get their products to market,” she told Business in Vancouver.

“So for us, that is the one piece we focused on: to ensure companies could test their products, make sure they could go through all of the regulations to get to commercialization.”

Reva founder Eswar Eluri said he was drawn to the location knowing he’d be working with startups specializing in medical devices. Early-stage health-tech companies, he said, can often hit a wall when it comes to complying with regulatory requirements. 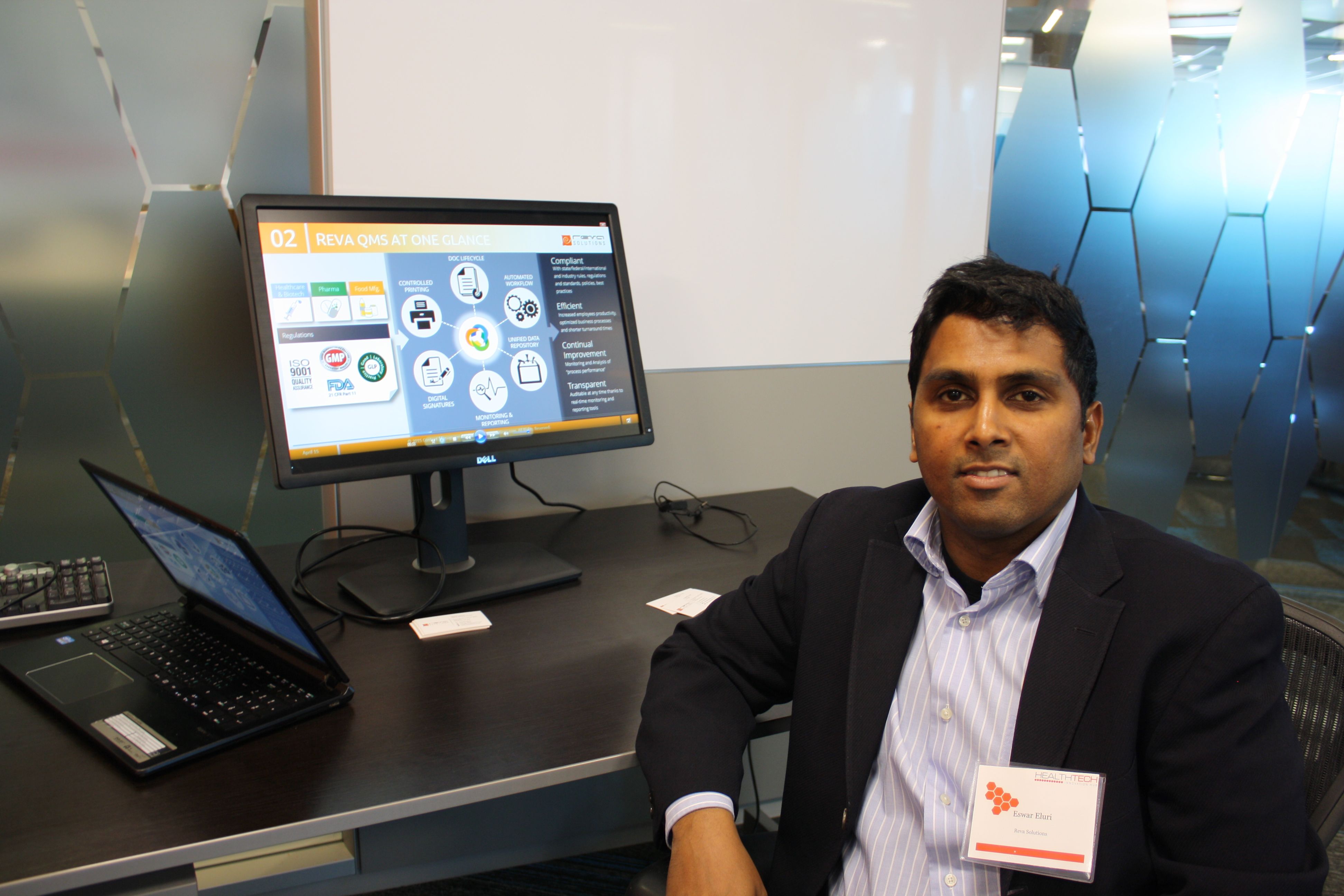 “One of the [issues] is that they are very busy making the products and a lot of the funding goes into the products,” said Eluri, who previously worked with Merck (NYSE:MRK) and Pfizer (NYSE:PFE) to ensure they complied with regulatory requirements in different global markets.

PHOTO: Reva Solutions founder Eswar Eluri moved his company from downtown Vancouver to Surrey to tap into the health tech startups in the suburbs

The cost of commercializing a product at Merck or Pfizer could run into the millions of dollars, which is why he said there’s a significant opportunity to assist startups with the regulatory and compliance processes at a fraction of the going rate.

In addition to helping startups commercialize, Eluri said moving to the innovation hub has opened the door to partnering up with the health-tech companies for joint ventures.

“I’m looking at the business problems that they are solving and … seeing maybe with our background and capability, we can augment those services,” he said.

That type of elbow-rubbing also suits Conquer Mobile CEO Angela Robert. During her first week in the hub, she ran into a potential customer for her company’s iPad training app for nurses while visiting the Starbucks in the foyer.

“It opened up a new user base that I didn’t really think of before, [which] is training physician assistants,” Robert said.

Conquer Mobile also moved from Vancouver to Surrey in April, and Robert said she’s counting on the proximity to SMH to get products out to market faster.

“When we’re doing filming in the operating room [at SMH] and you’re able to go back and forth really quickly – if we have any technology questions working with the different clinicians there, we don’t have to put any sort of pressure on our team.”