From Albertan black gold to globetrotting wealth to lucky heirs, big money is flocking to Vancouver real estate and fuelling huge price increases that show no sign of stopping, according to the CEO of Sotheby’s Canada.

The report characterizes baby boomers as sitting on a large amount of collective wealth because they have benefited from inheritances from their parents and, especially in Vancouver, have seen their homes greatly appreciate in value over the past 25 years.

Eighty per cent of high-net-worth Canadians are over 55, and that generation now represents 30% of Canada’s population, according to Statistics Canada figures quoted in Sotheby’s report.

In turn, boomers are now helping their Gen Y children — the report defines this group as 15-35 — buy real estate. A Genworth Canada survey of first time homebuyers released April 7 found that in Vancouver, 40% had help from their parents, compared to 22% throughout Canada.

Meanwhile, Generation X (34 to 54) has largely had to fend for itself. McCredie called this cohort “generation screwed.” The high-end buyers in this group tend to be double-income professional couples, but they have been priced out of Kitsilano, Dunbar or Point Grey. They’re increasingly looking at homes in East Vancouver, where detached homes are now commonly priced well over the $1 million mark. (Below, a "luxury" East Vancouver home pictured in the Sotheby's report.) 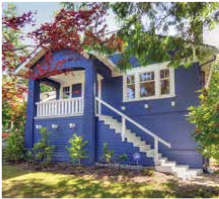 “In Vancouver a lot of families are taking up in East Vancouver, where 10 years ago that wouldn’t have been where they wanted to live,” McCredie said.

Wealth from outside the province’s borders continues to be attracted to Metro Vancouver, a trend McCredie said shows no sign of slowing.

That wealth is coming from other parts of Canada, in particular, from Alberta, as well as from abroad.

According to McCredie, wealthy Albertans have been attracted to Vancouver’s Coal Harbour neighbourhood, as well as Vancouver Island and Kelowna, and treat those properties as vacation homes. So it’s no surprise to him that Coal Harbour has a relatively high number of vacant condos (at 23.5%, the highest vacancy rate in the City of Vancouver, according to a 2013 analysis done by Bing Thom Architects planner Andy Yan).

“A lot of people bought in Coal Harbour because they only want to spend eight or 10 weeks of the year here and a lot of them are from Calgary or Edmonton and Toronto,” McCredie said.

“They’re not working or living here. They love Vancouver and they want to spend a good chunk of time here.”

How does a millennial afford a $1 million condo? With help from mom and dad | Sotheby's Canada

The high-end real estate markets in Vancouver, Toronto and Montreal are all “heavily influenced” by international buyers, according to the report. Buyers from China dominate in Vancouver, from China, Russia and the Middle East in Toronto, and from the Middle East, China, Europe (especially France) in Montreal.

A common pattern is for the students’ parents to buy a high-end condo or even a large detached house in a wealthy neighbourhood such as Shaughnessy, with plans for the entire family to move to Vancouver in the future.

McCredie said the discontinuation of Canada’s investor immigrant program has had little impact on foreign real estate purchases in Vancouver.

That program required individuals with a minimum net worth of $1.6 million to loan Canada $800,000; it attracted 36,973 immigrants to British Columbia, two-thirds of whom came from mainland China. The program has since been changed to allow only 50 applicants a year.

The change has not deterred the flow of foreign money into Vancouver real estate because many investors are not interested in immigrating to Canada, McCredie said.

“A lot of these guys are very wealthy and they don’t want to pay Canadian taxes,” McCredie said.

“The U.S. right now is a really difficult place to immigrate to or even buy a property in, whereas Canada has been much more welcoming,” McCredie said, adding that HSBC Canada, which is headquartered in Vancouver, is particularly well set-up to handle transactions from foreign buyers.

“Post 9-11, so much gets looked into in banking relationships [in the United States]. It takes a little longer to get your money from China into an Los Angeles bank.” 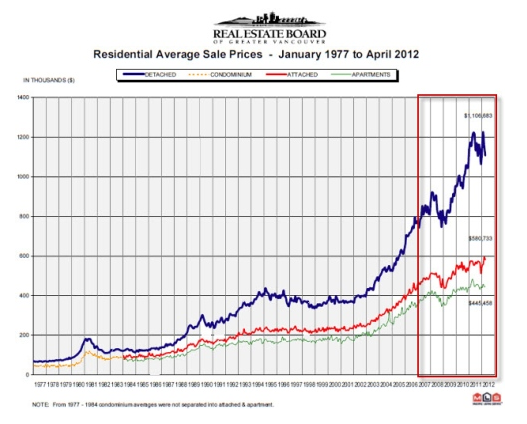 Over the past decade, prices for detached homes have become increasingly disconnected from condo and townhouse prices

That means prices, especially for detached homes, which are limited in supply, will continue to rise. A recent Vancouver Savings Credit Union report predicted that by 2030, the average home price in Metro Vancouver will exceed $2.1 million.

Meanwhile, average incomes in Metro Vancouver continue to lag behind those of other major Canadian cities. Over the next three years, the City of Vancouver plans to spend $125 million from its capital budget on efforts to house both low- and middle-income people, as rising rents and tight housing supply squeeze residents.

While some observers have called for policy makers to take a look at reigning in foreign investment through higher taxes or restrictions, McCredie balked at that suggestion.

“If the government came out and prevented foreign buyers from buying real estate, it would have a huge impact in our market,” he said.

“And you would see a correction.”

With files from Frank O'Brien