‘Living wage’ grows by 24% in Vancouver over past seven years: CCPA

The cost of raising a family with two children – with both parents working full time – has...

The cost of raising a family with two children – with both parents working full time – has jumped almost 24% since 2008 in Metro Vancouver.

Vancouver’s “living wage,” which is defined as the hourly pay each parent must make to meet a family's basic needs, jumped to $20.68 per hour in 2015, according to a Canadian Centre for Policy Alternatives report released April 29. This increase, up from $16.74 in 2008, was driven by increases in both shelter costs and child care expenses.

“[The living wage is] the amount needed for a family of four with two parents working full-time to pay for necessities, support the healthy development of their children, escape financial stress and participate in the social, civic and cultural lives of their communities,” the report states.

The wage of $20.68 per hour comes from a calculation that includes such expenses as food, clothing, shelter, transportation, child care and healthcare. It also takes into account subsidies that are available to families, such as rental assistance and the child care subsidy. 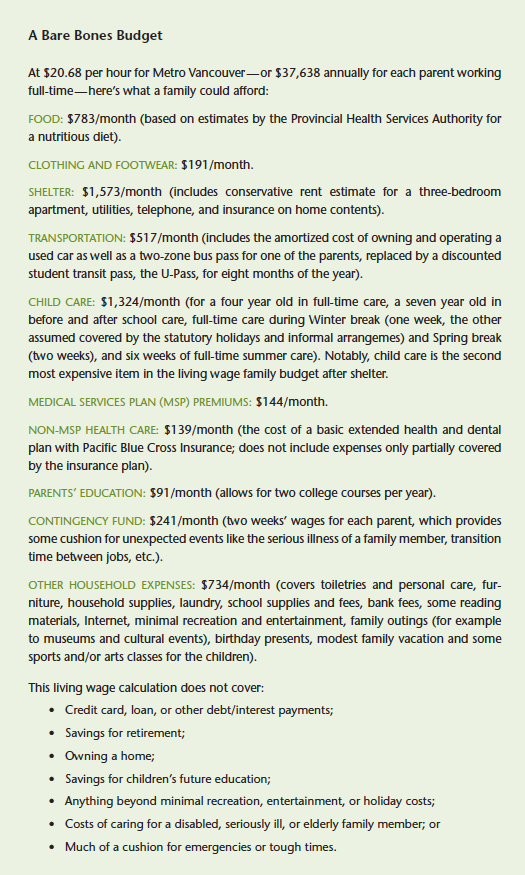 Assuming each parent works 35 hours per week, each must make $37,638 annually to meet the basics.

The CCPA points out that a living wage is not the same as a minimum wage.

“The living wage is a call to private and public sector employers to pay wages to both direct and contract employees sufficient to provide the basics to families with children.”

Over the past year alone, the living wage increased by 58 cents from $20.10. This means that since 2014, the cost of raising a family increased 2.9%. Meanwhile, inflation in the city was 1.1% over the same period, according to Statistics Canada.

The CCPA report focuses almost exclusively on the costs required for households comprised of two parents and two children.

“The living wage calculation is based on the needs of two-parent families with young children, but would also support a family throughout the life cycle so that young adults are not discouraged from having children and older workers have some extra income as they age,” the report says.

“In most communities the living wage is enough for a single parent with one child to get by as well, and this was the case in Metro Vancouver until the 2012 living wage update.”

There are 37 corporate and non-profit employers in the city with living wage policies. These companies, which include SAP-Vancouver, Vancity and the United Way, employ more than 6,000 staff and several thousand contract workers.

The CCPA also calculated the living wage for several other areas in British Columbia, including Greater Victoria ($18.93 per hour) and the Fraser Valley ($17.02 per hour).

“On average, what I see are job postings in the range of $12 to $18 an hour,” said Harrison, whose organization helps job seekers and employers from Langford to Port Renfrew.

“A lot of those are entry-level, but many also require a range of skills.”

Harrison said all of the WorkBC offices in the Greater Victoria region are busy with programs filled and job fairs packed.

“We’re seeing a lot of people coming who already have jobs but are looking for two or three [jobs] to make ends meet,” she said, noting an increase in youth and seniors seeking work.

“But on the other hand, a lot of employers are hiring. On [Victoria’s] West Shore, we have a lot of big-box stores with a range of positions.”

“The challenges I see for parents are around a few main areas and one of the biggest is the cost of child care,” said Linda Marcinkiewicz, program manager of the family self-sufficiency program.

“Food is also a major area. Many people talk about having to go to food banks regularly, even if they’re working, and the shame and guilt that comes with that.”

Marcinkiewicz said the majority of families she sees are led by single parents and do not have an earner making the living wage or more.

“When I compare that $20 to minimum wage, it’s terrible and painful to think about what families are doing to keep their heads above water,” she said.