Applause for the Indian prime minister’s positive effect on trade relations between India and Canada, protest over his human rights record

Indian Prime Minister Narendra Modi’s visit to Vancouver and Surrey April 16 showcased the polarizing effect he has on the local Indo-Canadian community.

The leader of the world’s second most populous nation was in Canada for three days looking to shore up business ties and increase economic activity between Canada and India. Both the provincial and federal governments have declared India a key country to target for increased international trade in the future.

Thus far more than $1.6 billion in commercial agreements between Canadian and Indian companies have been signed and announced during Modi’s visit.

Modi – well known as a Hindu nationalist back home – made his first stop at the Gurudawara Sahib, a Sikh temple run by the Khalsa Diwan Society in south Vancouver. Close to 100 protesters lined Ross Street, flanked by heavy police presence. Protesters blocked traffic multiple times, and a water bottle was hurled at a bus believed to be carrying the Indian prime minister. RCMP kept a close eye on protesters, at one time removing an elderly man who tried to sit down behind the barricade. 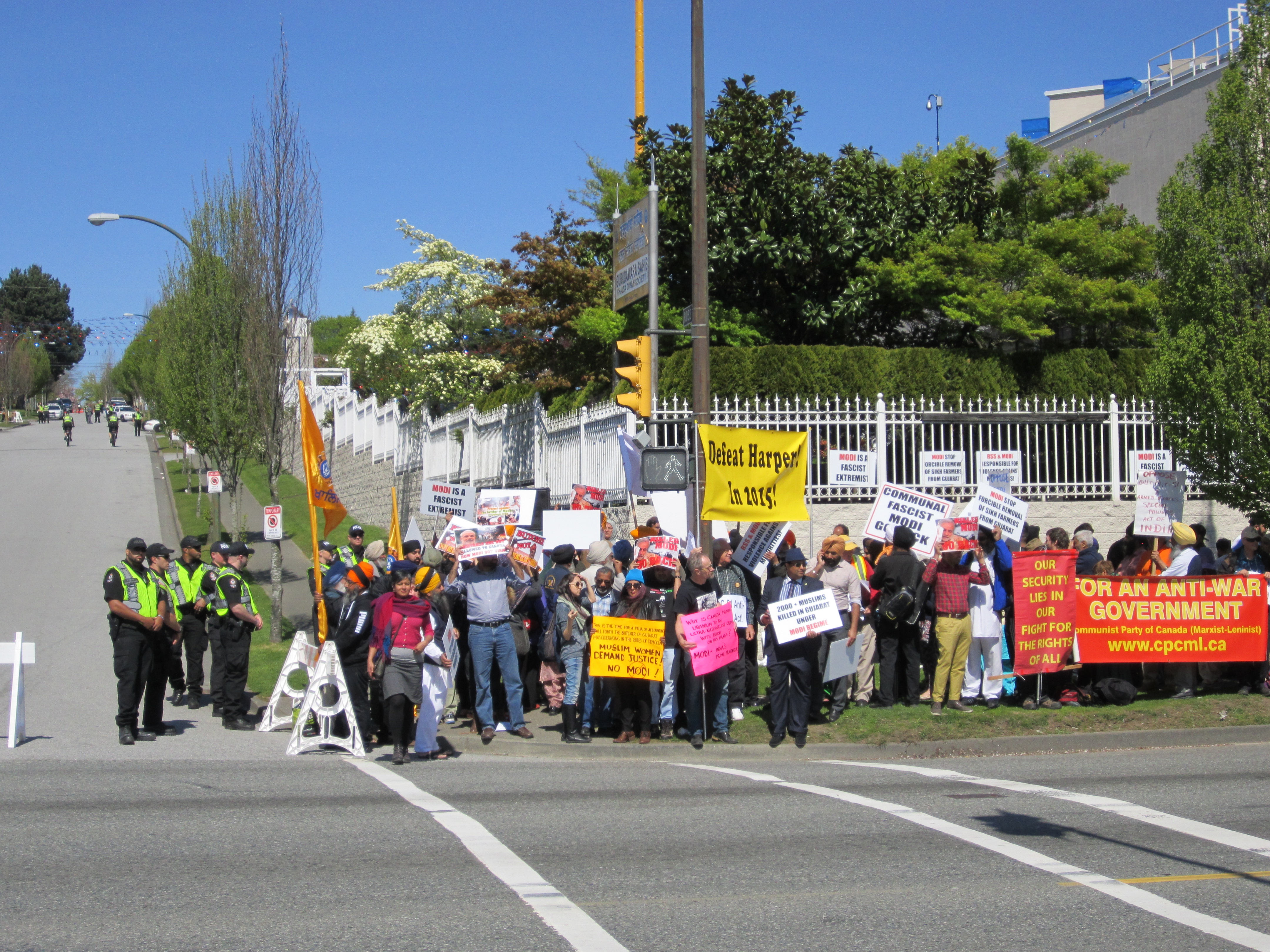 Protesters were hoping to raise awareness of a number of issues surrounding Modi – the most notable being his involvement in the 2002 Gujarat riots in India. Approximately 1,000 Muslims were killed in retaliation after a train carrying Hindu pilgrims was burned in the city of Godhra; however, the cause of the fire was never proven.

Modi, who was chief minister of the Indian state at the time, was alleged to have provoked some of the retaliation against the Gujarat Muslim community. In 2012, the Supreme Court of India cleared him of any wrongdoing regarding the riots.

Tracey Justinder Mann, a Punjab Indo-Canadian, said she came out to help bring awareness to this issue. 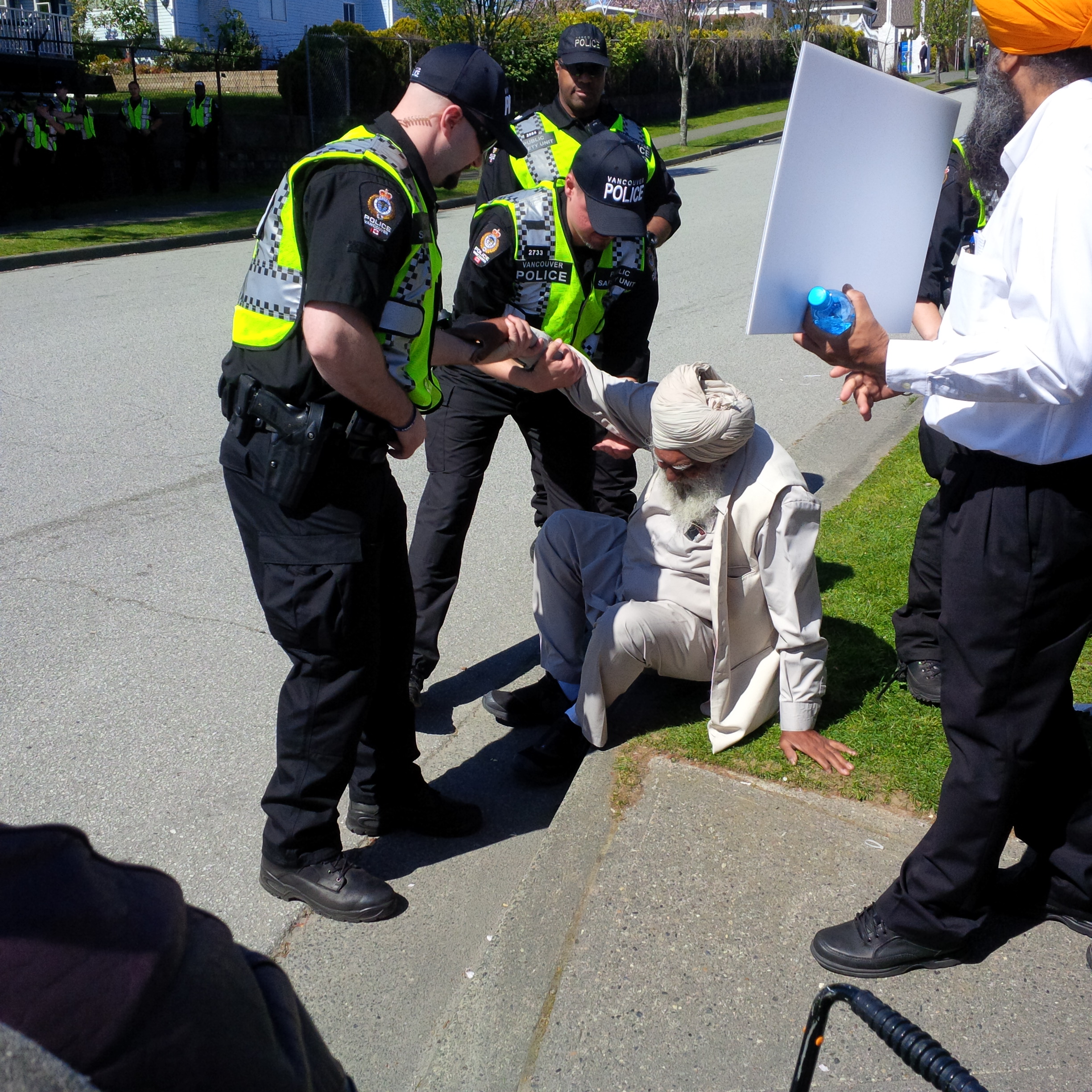 “My family is Sikh so I’m here in solidarity of the local Muslim community,” said Mann.

Indo-Canadian Sikh protesters were holding signs and chanting “Go home Modi” outside the Ross street temple. Relations in India between the Hindu majority, which makes up over 80% of the population, and the Punjab minority have long been strained since India gained independence from British Raj in 1947.

Partition, which split the former British colony into India and Pakistan, claimed the lives of half a million Sikhs, Hindus, Muslims and various ethnic minorities.

Many Sikh protesters outside the temple were calling for a sovereign Punjab nation separate from India, a longstanding issue for the Sikh community both in Canada and India.

Modi’s next stop was a late afternoon visit to the Laxmi Narayan Hindu temple in Surrey. RCMP presence again was heavy, as multiple streets were barricaded in various directions backing up traffic throughout the area. However, there were fewer protesters.

Sarita Singh and Ajit Singh recently moved to Surrey from Calgary and were near the police barricade hoping to catch a glimpse of the Indian prime minister before he entered the Hindu temple. The couple said they were out in support of his visit.

“We think Modi has proven himself since he’s been elected,” said Sarita Singh. “We were just in India about a month ago, and we see the contrast. He’s really pro-business and wants to help the country’s economy grow.”

Huberman said the mood was jovial and welcoming of the Indian leader.

“Modi was greeted with great admiration and hope that an eventual Canada-India Free Trade Agreement will take place,” she added. “At the Harper dinner in Vancouver Modi even noted that he was in full support of such an agreement. The crowd rejoiced at this.” 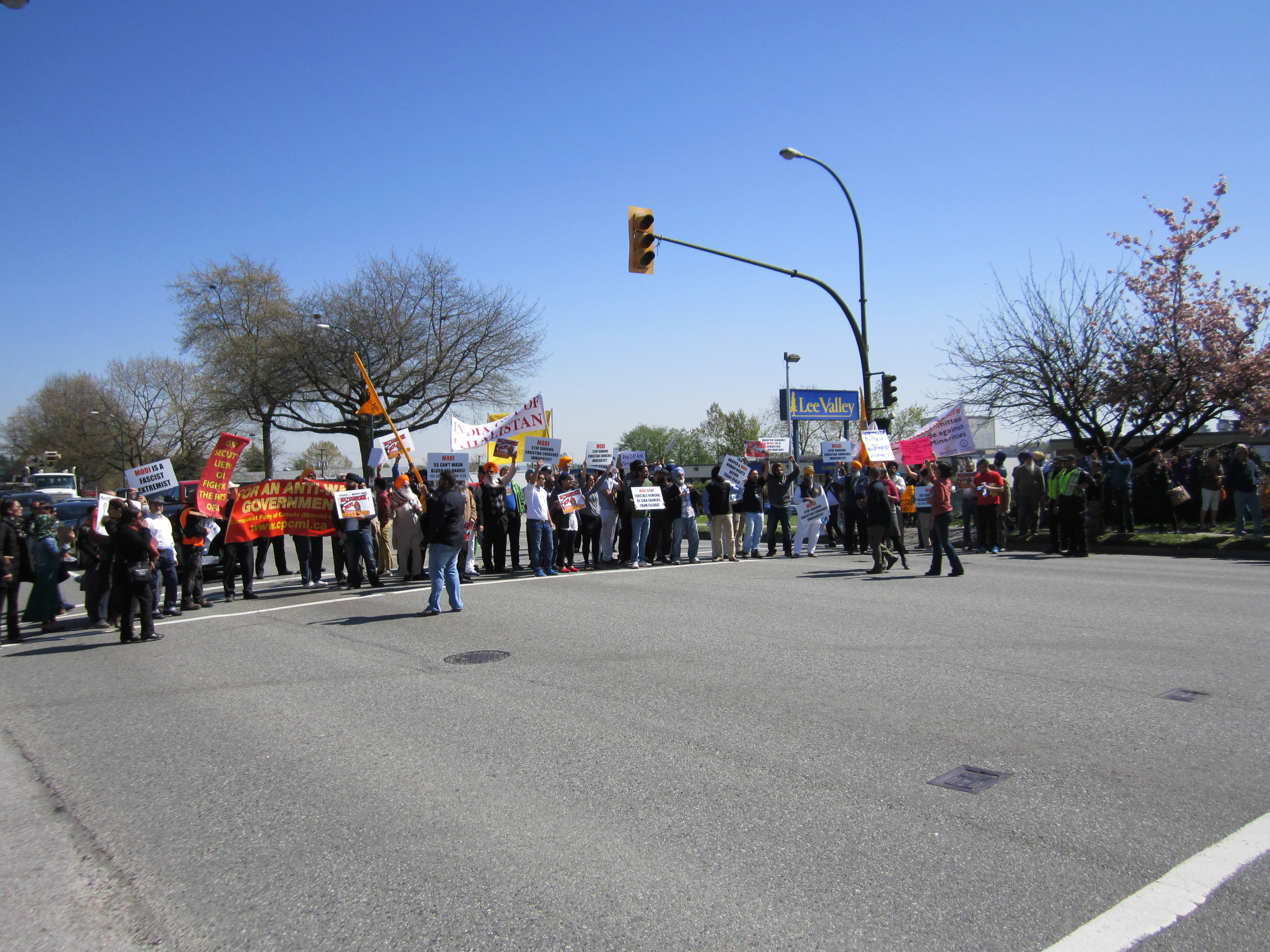