Company spent two years developing device but did a Toronto firm beat them to it?

Looking at the market potential for coffee pods, Darren Footz says he’s struck by the number of people who remain on the fence because of all the waste the single-serving cups produce.

“Even though single-serve has so many advantages with choice, and cost and freshness, because of K-Cup and this growing environmental catastrophe, they’re going back to other alternatives,” said the CEO of Vancouver-based G-Kup Coffee.

So while Keurig’s K-Cups may dominate the market, Footz’s company has spent the better part of two years developing a way to stop the popular pods from creating so much waste.

In February, G-Kup received a patent for what it claims is the world’s first 100% biodegradable and compostable single-serving coffee pod.

“We are a little surprised to get the patent granted as quickly as we did,” Footz said.

“It appears that the examiner and folks at the U.S. patent office really believe that this is a device that needs to be in the market.”

He added the pods should be ready to hit store shelves by the fall and the company already has a major international coffee roaster lined up to put its brand in the G-Kup.

Footz said he couldn’t name the roaster just yet but expects to make an announcement in the coming months.

In early April, Toronto’s Club Coffee claimed it was behind the world’s first 100% compostable single-serve coffee pod, the PurPod100.

Club Coffee did not say in a press release when or if the PurPod100 had been patented or whether it was also biodegradable.

Calls and emails to Club Coffee were not returned immediately.

While Club Coffee vice-president of innovations Claudio Gemmiti congratulated G-Kup for patenting a compostable product, he told Business in Vancouver his own company is likely further along getting pods to store shelves by the fall.

Club Coffee, which is also a service provider for Footz’s business, has spent months getting the green light for disposal from different municipalities across North America.

“I’m not convinced that all of that work has been done yet on (G-Kup’s) front because I know where they were with the patent and the product several months ago when Darren was talking to us about it,” Gemmiti said.

“The good news in all of this is the industry or people in the industry is recognizing compostability is something that merits working on.”

G-Kup estimated the 10 billion K-Cups tossed into North American landfills annually would fill 8,300 shipping containers that could be laid end-to-end from Vancouver to Whistler. 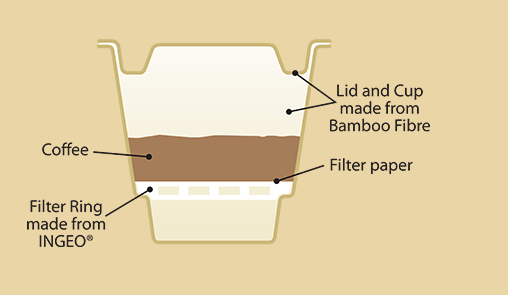 Footz said coming up with a solution to such a significant waste problem was more challenging than he ever imagined.

“The target that I shot for at the beginning was a device that was made from readily renewable materials,” he said.

“You’re dealing with water, heat and pressure…materials like bamboo or fibre, they just do not do well under those environments.”

But G-Kup worked with researchers at the University of B.C. to develop a device that could hold up in extreme environments. They eventually created a composite material made from fibre using sugar cane, bamboo filter paper and a biodegradable polymer called Ingeo.

Footz said the pod would be compatible with Keurig’s single-serve coffee makers, while the price tag would be within 5-10% of what cost competitors charge for regular pods.

G-Kup is also holding discussions with the City of Vancouver to get the one-time-use pods cleared for composting in green bins.