B.C. is poised to lead the provinces in economic growth for the first time in a decade, according to BMO’s Blue Book report.

B.C. is poised to lead the provinces in economic growth for the first time in a decade, according to BMO’s Blue Book report.

The projection echoes statements BMO economist Robert Kavcic made last week when he noted Alberta’s economic slowdown would knock the province out of the top spot, leaving B.C. as the No. 1 performer.

The BMO Blue Book, which uses the expertise of BMO economists and information given to commercial bankers from local businesspeople, projected B.C.’s real gross domestic product (GDP) would expand 2.6% this year before falling to 2.5% in 2016.

“While the housing market continues to strengthen, particularly in Vancouver, firm U.S. demand and a weak Canadian dollar should offset the slowdown in China and uncertainty in the mining sector,” Kavcic said in the May 4 report.

He noted the housing market has continued to strengthen as mortgage rates decline to new lows.

Housing starts are still “remarkably stable” in B.C. and prices are up 6.4% year-over-year in the Vancouver market, according to the report. 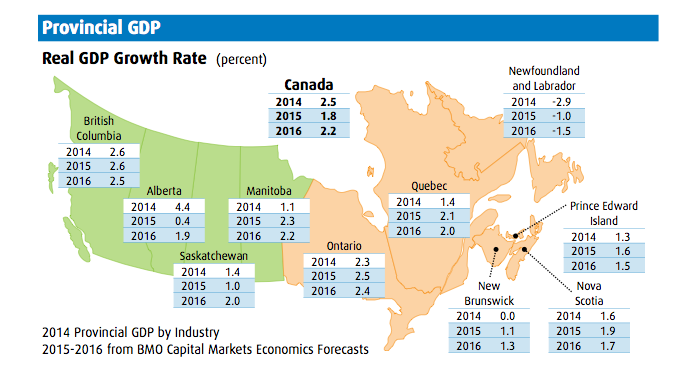 “That said, Vancouver still faces an elevated number of completed but unoccupied units on the market (mostly condos), but that continues to trend down. As a result, new residential construction activity will likely remain relatively stable as current supply is absorbed,” Kavcic wrote.

Other contributors to the report noted, anecdotally, B.C.’s tech sector continues to show strong growth, while the low dollar is expected to drive more tourism from Americans.