By Marke Andrews | May 19, 2015, 6:00am
A participant strikes a pose at the 2014 AniRevo at the Vancouver Convention Centre. Last year’s event celebrating Japanese anime and pop culture drew 12,000 people | Rui Photography/AniRevo

If anything has changed in the convention business, it’s that there is no prime-time season to hold an event. Summer is still busy, but events now are spaced throughout the year.

“Ten or 15 years ago it seemed all the conferences were held in late June, July and August,” said Annette McCunn, partner in Vancouver-based Simply Eventful Management, which organizes and staffs events such as conventions, symposiums and business meetings. “Associations have since realized that that is a peak season and you’re spending premium dollars, and that even getting the space is tough.”

For a full-service contract, Simply Eventful will find accommodation for delegates, take care of the budget, arrange liability insurance, handle registration, sponsorship and exhibitor space, market the event and arrange social functions such as galas, tours, parties and golf tournaments.

Next month, Simply Eventful will run the six-day World Congress of Dermatology (June 8 to 13), an event that includes 10,000 delegates and 300 exhibitors that will use both the east and west buildings of the Vancouver Convention Centre, as well as meeting rooms at three nearby hotels.

The congress is held every four years, and Simply Eventful had already put in three years of work trying to land it before Vancouver was named host city at the 2011 congress in Seoul, South Korea. The company had an edge on other bidders because it managed regional and national dermatology events, and both congress president Jerry Shapiro and secretary-general Harvey Lui live in Vancouver.

“This is one of the largest events we’ve done,” said Simply Eventful partner Bernice Chu, adding that 3,000 to 4,000 delegates is typical of a Vancouver convention.

Finding accommodation can be complex.

“Just because a hotel has 500 rooms, it is not going to give them all to you,” Chu said. “We have hotels as far away as the University of British Columbia and Richmond. People are coming from more than 50 countries, and some of these are low-income countries, so those people are going to need a hotel room for less that $200, less than $100.”

The company will often run shuttle buses from the hotels to convention events.

Simply Eventful Management has 16 employees and contractors but will hire more per event. For the congress, it will have 100 staff on site.

Some companies take care of their own annual events. Vancouver-based Anime Revolution, an organization that celebrates Japanese anime, has staged AniRevo (August 14 to 16) at the Vancouver Convention Centre for the last half-decade and recently experienced a huge spike in attendance. 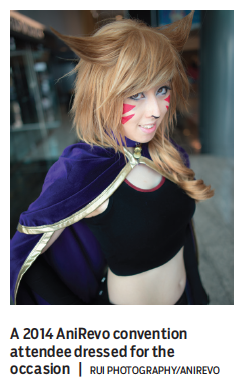 Anyone who thinks conventions cater solely to the three-piece-suit crowd has never attended AniRevo, where the young attendees often dress up as their favourite animate character.

“When a convention first starts, it’s very hard to get traction,” said Rahim Hasanali, AniRevo’s program creator and programming host. “With ours, people just jumped right into it, and once we tested the waters, the convention has been accepted.”

The growth has been largely through social media and word of mouth. Animate Revolution books guests and speakers both from Vancouver and from Japan, where it has staff. About 200 volunteers enable the organization to operate on a budget considerably lower than that of most conventions.

Claire Smith, vice-president of sales and marketing for the Vancouver Convention Centre, said the centre, in conjunction with Tourism Vancouver, will often fly in prospective clients to let them experience the city the way their delegates would.

“Retaining clients is critical for our success – making sure the experience here is exceptional, from the minute they come in through the door,” Smith said. “We want [delegates] to become an advocate for us. A good reputation is critical, and a bad reputation can really be a challenge.” •