By Tyler Orton | May 26, 2015, 12:00pm
Students learn how to make big data into something more digestible at a two-day visual analytics course hosted by VIVA | Photo: Submitted

It used to be thought of as “big data” – volumes of computer-gathered information so large that traditional analysis and software didn’t cut it when trying to make sense of it all.

“People in the industry don’t call it big data anymore,” said Ron McMillan, academic co-ordinator for business intelligence and analytics at the BC Institute of Technology (BCIT). “We just think of it as data.”

And just as industry perceptions about this type of data have changed over the past decade, McMillan said schools like BCIT are being pushed to adapt their curricula.

In November, BCIT’s school of business and school of computing collaborated to launch the Centre of Excellence in Analytics. The centre is developing certificates at the graduate and undergraduate levels in business analytics and data analytics.

McMillan said students will be trained in new techniques and software allowing them to tap into an organization’s data and turn it into something useful upon which businesses can base decisions.

For instance, BCIT’s smart-grid power system uses data analytics to improve electrical demand predictions at its Burnaby campus. Two decades ago, there wasn’t any real-time tracking of energy use at the school, but leaps in technology have now made that information available.

Businesses are also looking to use all the data they now have at their disposal.

“There will be a shortage of workers in these areas [big data and business analytics], especially in North America,” McMillan said, adding the apocryphal statistic is there are 80,000 unfilled positions requiring expertise in these fields throughout the continent.

Earlier this month, BCIT joined the University of British Columbia (UBC) and Simon Fraser University as partners at the Vancouver Institute for Visual Analytics (VIVA).

The non-profit organization trains students and researchers to take data sets that look like little more than impenetrable piles of numbers to the average person and reshape it into charts, graphs and maps people can make sense of.

In addition to co-founding VIVA, UBC has been picking up its own pace when it comes to meeting growing demands in the private sector for more workers who can make sense of big data. 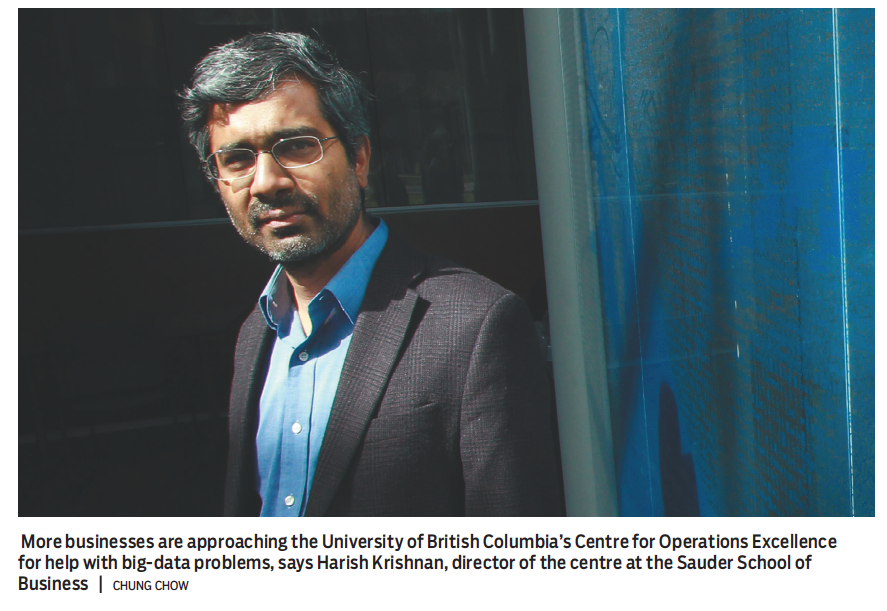 In April, the Centre for Operations Excellence (COE) at UBC’s Sauder School of Business became the first Canadian institution to be honoured with the prestigious UPS George D. Smith Prize. The Massachusetts Institute of Technology took home the same award in 2014.

The centre used to be focused solely on the “old field” of building models and using advanced mathematical techniques to analyze and improve business operations, according to COE director Harish Krishnan.

“And data hasn’t typically played a primary role in this, primarily because of lack of availability of data,” he told Business in Vancouver. “As more and more data is available, we’re finding that our partners are coming to us with projects that require us to do different things. Things we haven’t done before.”

In the past, organizations like the Fraser Health Authority have approached COE with problems such as accurately forecasting the number of residential care beds needed as the population ages.

But both Krishnan and McMillan said social media has played a big part in transforming what organizations want from big data.

Krishnan said businesses are now looking to find out whatever they can about potential consumers based on their Twitter feeds.

“The reason the centre is successful is because we’re not isolated from the business community,” Krishnan said. “Now they’re coming to us with more big-data problems, which is forcing us to say, ‘All right, what do we do differently?’”

While this might require some course rejigging, Krishnan said the centre is also introducing two-day boot camps aimed at drilling in new techniques for making big data useful.

“So basically we force ourselves to adapt to needs of the business world. And certainly as big data is coming on more frequently in the projects we deal with, we’re having to deal with that as well.”