The second-largest property owner in Gastown, with a portfolio of 50 properties worth in excess of $600 million, Reliance Properties Ltd. more recently gained notoriety for developing micro-lofts – average size, 270 square feet – in the historic Burns Block, a former single-room occupancy hotel in the 0-block of West Hastings.

The project was criticized for small spaces with rents comparable to top-tier office space that did little for affordability, but it won kudos for innovation and the mayor of New York called, seeking guidance for a similar initiative in Manhattan.

Reliance president Jon Stovell followed up with similar projects in Victoria and Surrey, believing them to be appropriate for the young people who want to be in the heart of cities rather than cooped up at home.

It’s an attitude he embraces himself, though he has chosen to express it on Vancouver’s west side.

“My management style is: lead by example,” said Stovell, who moved his wife and two children in 2011 – at the same time Reliance was renovating the Burns Block – from a 4,500-square-foot home in Shaughnessy to a narrow home in Point Grey overlooking the city.

“I’m really into micro-izing everything and simplifying life,” he said. “[It’s] on a 26-foot-wide lot. It’s the closest thing to being a condo that’s still a house, and it was all about simplifying and living in one room and modernity … having a view of the city and feeling connected to the city instead of just living surrounded by a hedge.”

The effort to develop properties that connect people with the urban streetscape stems from a deep concern over the city’s evolution. Born in 1959, Stovell grew up here and has seen Vancouver evolve into a cosmopolitan city ranked among the best in the world for its quality of life.

But the fact that it’s come at the price of affordable housing troubles him. 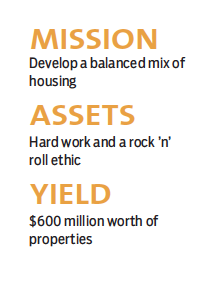 “I’m really keenly interested, as a citizen of Vancouver who grew up here, in offering the broadest array of housing options for people,” he said. “I find it quite sad, actually, that the city has become so expensive, and I don’t think the regulators in the city, and our industry, work hard enough to try to make sure people have a really good range of options.”

Reliance, for its part, has contributed an array of housing types to the city, from live-work spaces in Gastown to luxury units in Coal Harbour as well as micro-lofts and, now, in partnership with the Jim Pattison Group, 810 market rental and condo units in Skyfront, the first residential phase of Burrard Place, a million-square-foot development that also includes retail and commercial space.

The combination is one that not only fulfils the requirements of the business and the city, but also aligns with Stovell’s belief that greater density in the region’s core can help protect established neighbourhoods outside the core that feel threatened by city planners.

“Downtown, built up as it is, is not working hard enough for our population, given its proximity to transit, its walkability, bikeability, proximity to the beaches and parks,” he said. “A lot of development is being driven into areas that are causing a lot of anxiety for the citizens of the city. I think it’s counterproductive. Whole areas of the downtown could take all that density without the loss of single-family homes and single-family character.”

The son of a federal research scientist and dietitian for University of British Columbia (UBC)Food Services, Stovell attended St. George’s School before pursuing courses in computer science and accounting at Vancouver Community College and the University of Victoria.

But Stovell’s business sensibilities were first forged by rock ’n’ roll. Playing guitar alongside Rob Leshgold and a band of architecture students in small towns across B.C. taught him the skills that served him well in real estate.

“I ended up driving all over British Columbia in a broken-down school bus and saw the underside of life,” he said. “That was a lot of fun. I think I learned a lot.”

One of his most memorable gigs was in Pouce Coupe, “playing at a cowboy bar wearing spandex pants and wearing knee-high burgundy boots and getting chased around by drunk cowboys after the gig” – a night that ended with Stovell hiding out in a dumpster. The episode was the kind of character-building experience that would come in handy later in life when facing tough crowds at public hearings.

“I [brought] that forward into my work life when I started to get back into the mainstream economy,” he said. 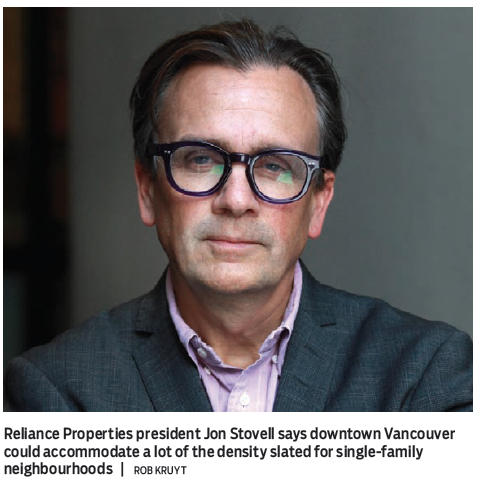 Returning from the road, he landed a job as finance manager for UBC Food Services but stayed in touch with Leshgold, whose father, architect Jack Leshgold, owned what was then Reliance Holdings Ltd.

Stovell had set up Reliance’s accounting software as a student, and when a condo project ran into trouble in 1993, Stovell’s financial expertise was tapped to clean things up.

“A contractor went broke and I had to fix it all. I think after that, [Jack] decided I was capable of doing these things so he asked me to come back,” he said.

Stovell steadily familiarized himself with every aspect of the business, and became president in 2010. He also represented it in the community, heading the Gastown Business Improvement Society, participating on the executive of the Urban Development Institute (he’ll chair the organization next year) and serving on the city’s heritage commission, development permit board advisory panel and public art committee.

Overcoming that selfishness is important if anyone – from developers to ordinary citizens – want to build a better city.

“We all have an obligation to contribute to the health of our community, not just our own fortune,” he said. •